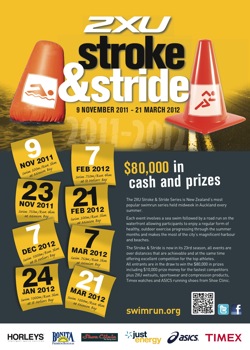 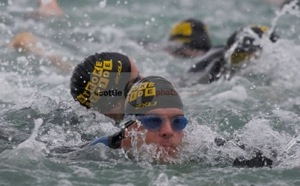 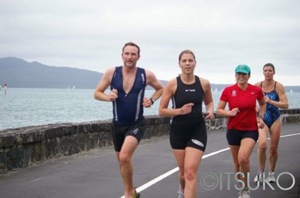 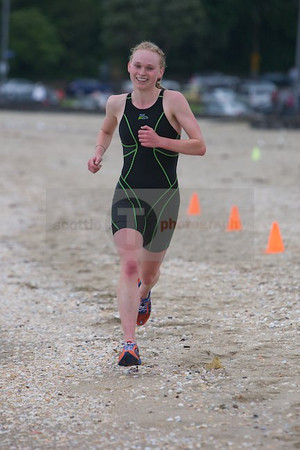 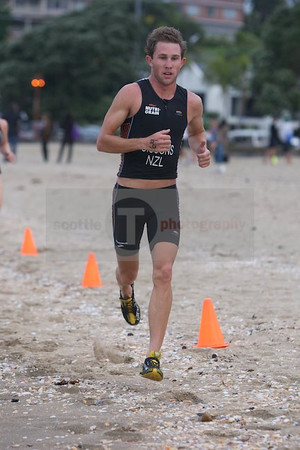 Four seasons in one day doesn’t begin to describe spring in Auckland. In the space of an hour, even in the space of a single vista we were experiencing all sorts of weather action in the lead up to the opening race in the new season’s 2XU Stroke & Stride Series. While the wind boxed its way around various compass headings and low hanging clouds of wind and rain marched down the harbour we were feeling most fortunate to be getting ready to race in an unscathed Mission Bay. Then following as we slept off a fabulous opening event that ticked all the right boxes the outdoors was again being lashed by nasty squalls of that inclement stuff.

So in the relative shelter of Mission Bay the leading females were able to make short work of the 500 metre swim leg and just 6 and a half minutes after the start it was a leading pack of seven swimmers closing fast on the shore. Rebecca Clarke was first to touch the sand recording 6 minutes 34 seconds with last summer’s champ Simone Ackermann latched onto her toes and with a small blanket covering the other contenders at this stage of the race. Even with the minuscule swim leg this lead bunch had managed to prise open a 40 second lead over their pursuers and it would require a supreme effort on the run to peg them back.

Watching all this unfold was the large men’s field eagerly waiting for their start and once their hooter sounded they were soon sprinting around the buoys and closing on the beach. There appeared to be no decisive breaks with the men as the front swimmers were closely tracked by just about everyone. Cameron Todd won the swim recording 5 minutes 49 seconds with then the following notable times recorded: Sam Franklin 5 minutes 53 seconds, Ryan Sissons 5 minutes 59 seconds, Nick Berry 6 minutes 5 seconds, reigning Stroke and Stride champion Michael Poole 6 minutes 11 seconds, Sam Ward 6 minutes 30 seconds and Liam Scopes 6 minutes 46 seconds. Why these times were notable amongst the hundreds and hundreds of guys surrounding them would be revealed 16 minutes or so later.

Four years ago almost to the day a sixteen year old girl took part in her first ever Stroke & Stride and simply ran away from all her competition to record a magnificent and surprising victory. This was backed up by another win two months later however even more surprising is that four years would pass before she got to repeat those fine performances and again stand atop the podium. Sophie Corbidge has every reason to be delighted to have finally won her third Stroke & Stride rewarding all her perseverance and training through the years. Our Series Champion for the past three seasons Simone Ackermann has been all but unbeatable in this time however for this race she had to settle for second. Another on the comeback was third placed Maddie Dillon having her best race in a while and holding off the talented Rebecca Clarke and Emily Pearce.

The out and back 5 kilometre run course is actually dead flat never rising more than a metre or so above the sea level the road hugs as it winds it way out to St Heliers Bay and return. Many of the competitors didn’t seem to think so as their fresh legs aided by a tailwind accelerated them to the turn cone only to be then confronted by a pesky headwind holding up a tiring body for the return leg.

The men’s field developed into a battle of the heavyweight champions on this homeward leg as 2010 Stroke & Stride Series Champion Ryan Sissons was being chased all the way by our 2011 Champ Michael Poole. At the finish it was Ryan Sissons landing the decisive blow returning to win his first event in two years. Michael Poole was to be the only challenger out on the run course taking the silver. Then it was Sam Franklin holding on for a tightly contested third place just seconds ahead of Liam Scopes and Cameron Todd. Emphasising just how competitive this event was is that these first five men are members of that very select club each having a Stroke & Stride victory to their name.