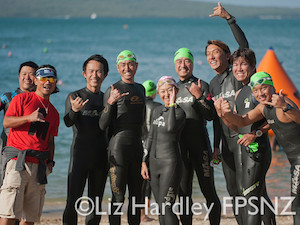 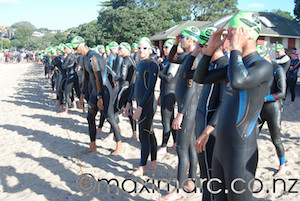 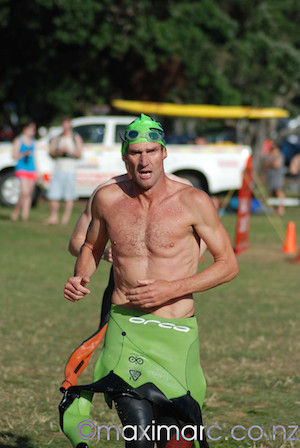 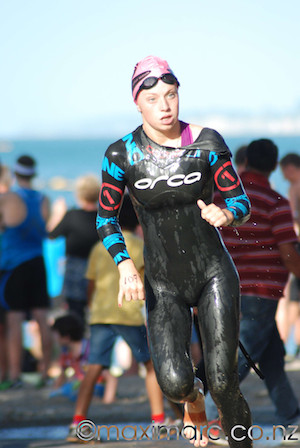 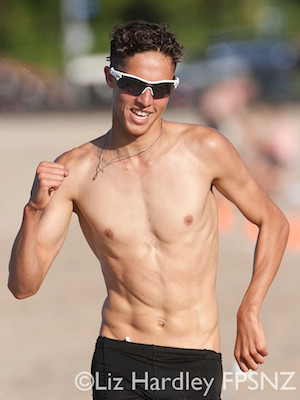 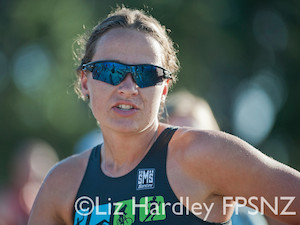 In mid January most of Auckland are still enjoying their summer holidays, soaking up the sun at the host of beaches that frame the city.  Sunshine, warm water, hot temperatures; the beach at Mission Bay has all the ingredients for a relaxed day at the beach however the multitude that descended on the waterfront this late afternoon were also keen to throw some hot racing into the mix.  While Auckland relaxed, the first Stroke & Stride of 2014 and the fourth event of the season was in town.

Apart from bordering on being too hot for swimming swathed in rubber and too hot for running at your fastest possible pace, the conditions couldn’t have been better to start the New Year with the lightest of offshore breezes just helping to make the Waitemata sparkle.  First to enjoy the balmy dip in the harbour were the men and after the tumultuous charge to the first buoy it was apparent that no swimmer was going to go clear of the field at this race.  This 1000 metre distance is the longest swim in the Series and made to order for perennial winner and defending Series Champ Brent Foster.  It is unusual for other swimmers to be able to hang with Fozzie during the swim however this time up, the near perfect conditions meant he had close company with Jackson Cropp and Jay Wallwork in tow right up until he hit the beach clocking 11 minutes and change.  While this trio were transitioning Trent Thorpe finished his swim 15 seconds in arrears and was then followed by Matty McCullough, Cooper Rand, Michael Perree, Jez Sherman, Rick Wells and Japan’s Junichi Yamamoto.  Then came a couple of large bunches no doubt all aided by the near glassy conditions to stay so close.

The women’s field spread out a little more for their jaunt around the buoys with their own leading trio of ace swimmers making decisive gains by the halfway point.  Their frenetic pace had Penny Hayes, Rebecca Clarke and Natasha Bowyer out of the water and running up the beach in a time of 12 minutes and 43 seconds with three-quarters of a minute ticking by before the next swimmers including Molly Swanson, a sans neoprene Jacey Cropp and Ainsley Thorpe were making landfall and beginning their chase.

The little 3 kilometre run to the end of Kohimarama and back doesn’t give much opportunity for the field to shuffle the placings though it is certainly not the time to relax and enjoy the view.  Brent Foster and Jay Wallwork immediately put the hammer down at the head of the men’s field exiting transition and accelerating ahead of the chasers. As the run progressed Jay Wallwork ran clear to reach the finish line unchallenged and claiming his first ever victory at the Stroke & Stride.  Cooper Rand clocked the fastest run split and made the biggest gains on the run getting up for second place. This left Brent Foster having to settle for a gallant third just seconds ahead of Matty McCullough who was recording his best ever Stroke & Stride result and holding out Michael Peree.

Rebecca Clarke and Penny Hayes had never been more than a couple of metres apart throughout the swim and for just about all of the 3 kilometres of the run. Then as they got adjacent to the sands of Mission Bay it was Penny Hayes this time who found another gear and moved slightly ahead. This advantage proves to be enough as she runs through to take first place and her very own first ever victory at the ultra competitive Stroke & Stride Series. A few seconds back Rebecca Clarke claimed second place and then we waited to see who of the chasers would also get themselves a podium finish. Turns out it was Natasha Bowyer with the legs to match her stellar swim this week claiming third place and her own best ever Stroke & Stride result. Running herself up into fourth place was Amelia Watkinson just in front of 14 year old Jacey Cropp scoring a fabulous fifth place in her debut race.

Current Series leader Penny Hayes has amassed her points with 4th, 2nd, 3rd and 1st place finishes. Rebecca Clarke is trailing by 11 points but has had just the three starts. Then there is another 11 point gap back to Amelia Watkinson also with three starts and holding a five point advantage over Ashleigh Williams. Defending Champ Brent Foster hasn’t missed a race or a top five finish this summer and is rewarded with his current eight point lead over Cooper Rand. And lurking in third and fourth are the young, the dangerous and very fast Jay Wallwork and Dan Hoy.

Four more races, four more unexpected winners or will normal transmission resume? All will become more clear when the second half of the season rolls out in a fortnight at Stroke & Stride Race #5 on Wednesday, January 29th