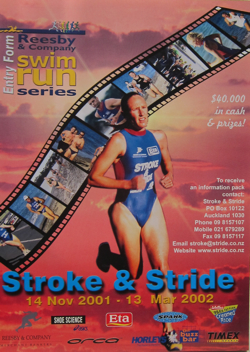 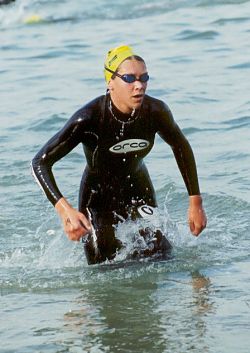 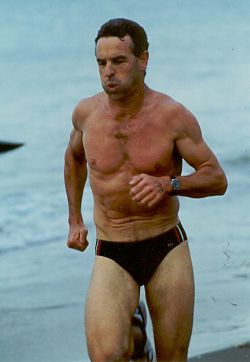 It is only right that for the Christmas edition and the final Stroke & Stride of 2001 that favorable weather and electrifying racing are features of the report and so it proved. Despite the forecast thunderstorms and the tumultuous weather that had battered Auckland over preceding weeks it was actually sunshine and a light offshore breeze that welcomed competitors to St Heliers Bay for Race #3 in the Reesby & Company Stroke & Stride Series. For the first time this season it wasn’t a windswept harbour with a nasty chop to contend with on the swim leg, just some sun in the eyes for the final leg of the big 1000 metre triangle. And just a light breeze to cool competitors as they dashed over the super quick 3 kilometre run to Kohimarama and back beneath the Pohutukawa trees in glorious blossom.

Fresh from her victory in the prestigious Auckland Harbour Swim on the weekend, it was Rebecca Nesbitt who also led the way around the buoys at Stroke & Stride but hot on her heels exiting transition were those other superb swimmers, Rebecca Linton and Anna Cleaver. Giving chase to this trio were Kirsty Whiting and Leigh Webster while Debbie Tanner was just 15 seconds in arrears. Three kilometres is not long to shake up the placings but it was the perfect length for Anna Cleaver to get to the front and then hold that lead to the finish line and record her second ever Stroke & Stride victory. Previous Series Champion Debbie Tanner recorded one of the fastest runs which she used to just snatch second ahead of Kirsty Whiting. Current Series Leader, Vanessa Palmer cemented her strong position with a fine fourth place only seconds in front of Rebecca Linton.  This race is number ninety-five on the all time list of Stroke & Stride’s. A certain athlete lining up on the beach was endeavoring to win his 40th ever Stroke & Stride, which is a remarkable achievement in anyone’s language.

Brent Foster won his first event back in 1992 and had already been a champion competitor in swimming and surf life saving events before trying his hand at the Swimrun sport. Now a decade later he continues to dominate against all-comers from an array of sporting backgrounds. For the swim leg of this event he had the company of Olympic swimmer Steven Ferguson until a navigational error allowed Brent Foster to jump ahead and grab a five second lead into the transition. These two had 40 seconds over the rest of the men and that was enough for Brent Foster to claim yet another Stroke & Stride victory and lift his tally to forty on the all time list. It is not a matter of if, just a matter of when Bevan Docherty will record his first win. He was second a fortnight ago and again looked all class as he claimed another second placing this time out. Hungarian visitor, Szabolcs A’Goston kept the local boys honest with his first start of the season and will be another to watch as the season advances. James Elvery lead Terenzo Bozzone by 12 seconds at the start of the run and these two were still 12 seconds apart at the finish as they both grabbed more of those valuable points.

Going into the four week Christmas break the Series Grand Prix is hotting up and giving a number of our top competitors something to think about over the holidays. After three events Vanessa Palmer has a healthy looking seven point lead over Anna Cleaver but just one point back there is a three way tie between Julia Scopes, Debbie Tanner and Kirsty Whiting. With his three wins, Brent Foster has put some daylight between himself and the rest of the men but it is still early in the season and he’ll be wary of the challenges being mounted by Clark Ellice, Terenzo Bozzone, Bevan Docherty, James Elvery and Brent Sheldrake.