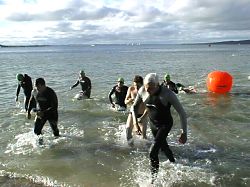 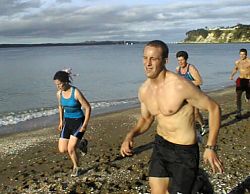 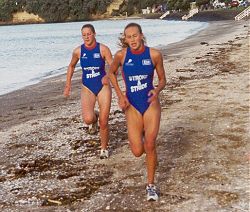 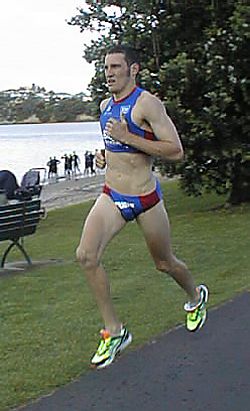 The second race in this season’s Reesby & Company Stroke & Stride Series was a first for the sport with the pro field racing without wetsuits for the first time. Fortunately Auckland City laid on a beautiful afternoon with the field basking in warm sunshine as they lined up on the beach ready for the race start. The water, while still a little cool this early in the season, was also in pristine condition with hardly a ripple to be seen on the Waitemata Harbour. The pro men and pro women’s field were started at the same time and the action was fast and furious around the 750 metre triangular course. On their return to shore they were lead from the water by Olympic swimmer, Steven Ferguson in a shade under 9 minutes closely pursued by Brent Foster and then with a small break back to the chasing pack that included the likes of Paul Amey and Kieran Doe.

Some of the women’s field demonstrated quite clearly just how fast they can swim as they stayed with this group with Rebecca Nesbit exiting the water in 9min 16sec accompanied by Caroline Collard and Bec Linton.

The 4 kilometre run to Mission Bay and return was as always flat and fast and today without any wind for the competitors to contend with. Last fortnight, saw Paul Amey stamp his authority on the field as he moved quickly into the lead recording the fastest run split on the day. This week he again was the fleetest of foot on his way to his second straight victory. Defending Series Champion Brent Foster couldn’t quite match Paul on the run segment but stayed close and finished just 9 seconds behind. Kieran Doe backed up his outstanding swim with an equally impressive run to finish third, his best ever result in a Stroke & Stride. Terenzo Bozzone And Malcolm McGregor trades places on the run with Terenzo holding out Malcolm by just seconds on the line.

Evelyn Williamson had a great swim and was handily placed heading out onto the run and then soon moved to the front of the women’s field. Again Evelyn was tracked by some very quick runners coming from behind but she didn’t give them a chance to challenge her as she recorded one of the fastest run splits herself and ran home for her first ever victory in a Stroke & Stride. Fiona Docherty did claim the fastest run of the night coming through for second, finishing just ahead of the winner from Race #1, Nicole Cope while Heidi Alexander just held off the fast finishing Jo Lawn to round out the top five.