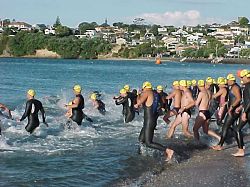 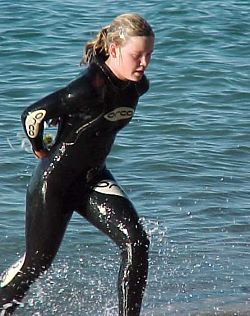 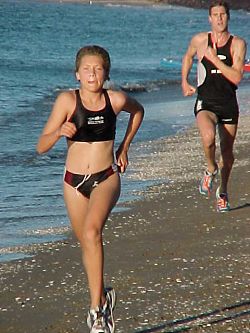 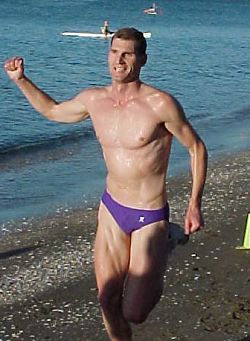 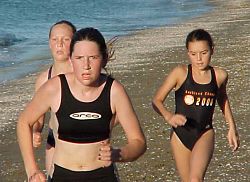 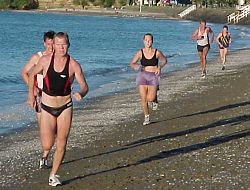 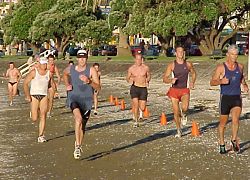 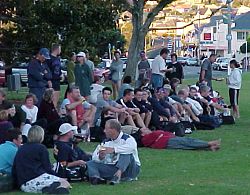 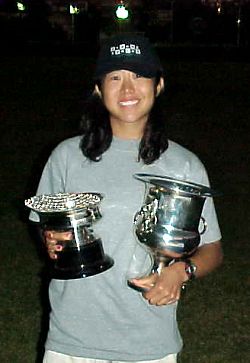 Race #8 in this season’s Stroke & Stride Series was not just the last race in the Series and the deciding event in the PHASE Grand Prix but it was also the 2000 New Zealand Swimrun Championships. Athletes therefore had an abundance of motivation as they lined up on the beach at St Heliers Bay for the Stroke & Stride finale. In the best conditions of the season, the City of Auckland had laid on a superb evening for this auspicious event with sunshine, blue skies and the Waitemata Harbour at it’s sparkling best.

The women’s field were started first and leading the way around the big 1000m triangle was super swimmer Juliet Tompkins who exited the water in a shade under 12 minutes. Just five seconds behind in second place was Marisa Carter, currently leading the Series and looking for another top performance to seal a Series victory. Kirsty Whiting made the most of the great swimming conditions to record an impressive 12m 22s with Ellen Clarke, Debbie Tanner and Vanessa Palmer just 20 seconds behind. The winner of Race #3, Heidi Alexander and the winner of Race #5, Joanna Lawn both recorded 13m 28s to put them both in contention for another victory with a further 30 seconds back to Nicole Cope who had triumphed a fortnight earlier at Race #7. A new run course was unveiled for this event and 4 kilometres later it was a new winner running up the beach to lead the field home to take her first ever victory in a Stroke & Stride. Kirsty Whiting added a scintillating run to her hot swim time to win the season’s final event and making her the youngest ever New Zealand Swimrun Champion. Marisa Carter capped off her best season since 1994 with another second place giving her a top three finish in all eight races this season. Nicole Cope again recorded fastest run in which she moved up to third while newcomer to the Series, Tanya Lee grabbed an impressive fourth just seconds ahead of Debbie Tanner and Joanna Lawn.

The only tough part of the evening’s swim was the final 200 metres swimming straight into the setting sun which meant super quick times were the order of the day. Stroke & Stride legend Brent Foster would no doubt have wished for a larger dose of wind and waves to make things a bit more arduous out on the water but even in these favourable conditions he managed to get away from the rest of the field early on with only one swimmer staying in contact. Brent extended his lead on the main field to more than half a minute by the time he returned to shore but as he hit the beach it turned out to be Team Foster leading as it was Brent’s brother Dean who had kept him company throughout the swim. So Team Foster both went under 11 minutes, which is simply flying for a one kilometre open water swim no matter how good the conditions. Times recorded by other top contenders included Chris Williams 11m 29s, Steve Nicholls 11m 39s, James Elvery 11m 55s, Samuel Walker 11m 59s, Clark Ellice 12m 14s, Stuart Blake 12m 19s, Liam Scopes 12m 53s and Rodney Gordon 12m 59s.

Dean Foster had matched his brother stroke for stroke during the swim and was now looking to match strides with him during the run. But Brent Foster was again all class as he turned up the heat early on during the 4 kilometres to again clear away from the rest of the men’s field and his brother to win his sixth Stroke & Stride from six starts this season and retain the New Zealand Swimrun Championship title. Dean Foster had his best race of the season and claimed a comfortable second placing while the athlete in third, James Elvery was another who had improved throughout the season. Winner a fortnight ago, Chris Williams grabbed more of those valuable points finishing fourth, ahead of Samuel Walker and Steve Nicholls.

For those that have been around a while there may have been a sense of déjà vu when the final points were totalled and the Stroke & Stride Series Champions decided. Way back in 1994 it was Marisa Pentecost and Brent Foster who were both awarded the Stroke & Stride Cups; Marisa for the first time while Brent repeated his win from the previous year. In the past five years Marisa has been one of the fiercest competitors in the women’s field and got married to become Marisa Carter while Brent Foster has of course won that Cup another four times. In a very convincing manner and in the year 2000 Marisa Carter (3rd, 1st, 2nd, 2nd, 1st, 2nd, 2nd & 2nd) and Brent Foster (1st, 1st, 1st, 1st, 1st, & 1st) are once again Stroke & Stride Champions and winners of the PHASE Grand Prix.

Never before have we been treated to the intense competition that this season’s women’s field has displayed with six different winners coming from the eight starts. Therefore the closer battles in the PHASE Grand Prix were fought further back in the placings with Nicole Cope (1st, 3rd, 5th, 2nd, 1st & 3rd) just getting up to head off reigning champ Heidi Alexander (2nd, 2nd, 1st, 5th, 3rd, 3rd & 7th) in the final race. Kirsty Whiting (4th, 4th, 6th, 3rd, 4th, 4th & 1st) and Juliet Tompkins (11th, 8th, 4th, 4th, 9th, 6th and 8th) both showed consistency and improvement throughout the summer to also finish in the money.

A total of 23 competitors achieved the magical 40 point barrier in the PHASE Grand Prix.