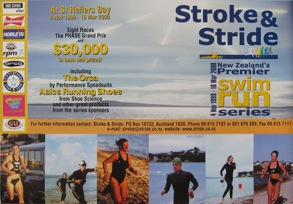 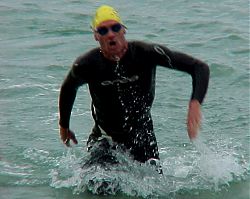 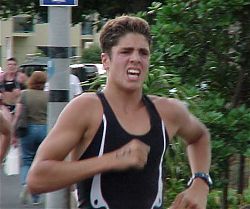 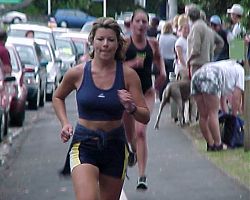 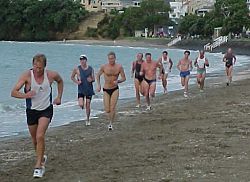 Stroke & Stride Race #6 saw competitors line up for the 500 metre swim followed by the 5 kilometre run on another fine and warm Auckland summer’s evening. This mix of distances is always expected to favour the runners in the field and while the swim portion of the race only makes up 20 to 30 percent of a competitors total time, as in every Stroke & Stride, every second counts. So whether you’re attempting to make a break from the opposition or stay in contact with that bunch just in front of you, one thing is certain, you’ve got to turn it up to maximum volume for every stroke of those 500 metres. That extra effort during the swim doesn’t make the start of the run any easier for anyone but at least you have the luxury of the next 5 kilometres to settle into your stride.

The out and back run to Mission Bay shuffled the deck considerably and on the return to St Heliers it was Joanna Lawn, with the fastest run split of the night, that had elevated herself to the front of the field and ran up the beach to record her first ever Stroke & Stride victory. Resuming their fortnightly duel were the leading contenders for the Series Championship Marisa Carter and Heidi Alexander who finished second and third. Kirsty Whiting backed up her great swim with an equally good run to take fourth while Vanessa Palmer’s superb season just keeps on getting better with her first ever top five finish.

Perennial favourite Brent Foster got away from the men’s field recording a scintillating 5m 49s for the swim leg which placed him eleven seconds ahead of Daniel Pritchard and with a further five seconds back to Robbie Baff and Dean Foster. Also on hand for this event and handily placed after the swim was the international athlete Mike Trees, originally from England but now hailing from Japan recording 6m 26s, and local running sensations Liam Scopes 6m 50s and Rodney Gordon 7m 05s.

All would be looking to put pressure on Brent Foster out on the run course. Five kilometres later it was Mike Trees who got the closest but Brent Foster was again all class as he recorded his fifth straight win of the season. Liam Scopes’ golden summer continues with his sensational top three finish. Rodney Gordon loves these distances and chased hard all day snatching fourth place just ahead of James Elvery who grabbed more of those valuable points to lift him into the top five in the Series Grand Prix.

Eight male and eight female athletes have now passed the 40 point threshold in the PHASE Grand Prix which means no matter what the results in the final two events they’re already assured of a share of the cash and prizes up for grabs. Of course to win the Stroke & Stride Series is one of the most difficult and prestigious titles to attain in sport and at this stage it’s our past Series Champions Marisa Carter 1993/94 and Brent Foster 1992/93, 1993/94, 1994/95, 1995/96, 1996/1997 and 1998/1999 with their grip most firmly on the silverware as we decide our first Series of the year 2000.