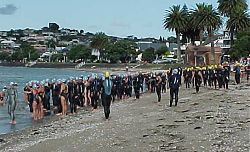 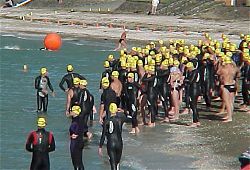 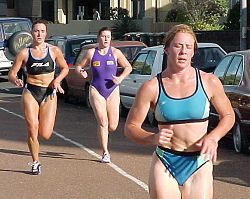 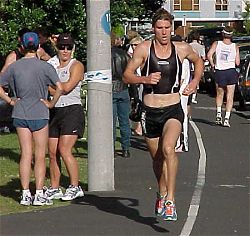 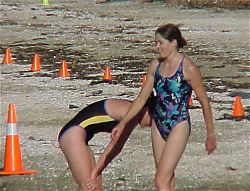 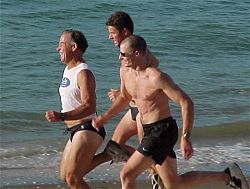 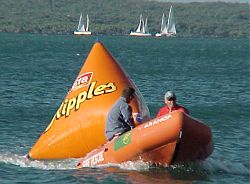 There’s no such thing as a free lunch and this old saying proved very apt for competitors in Race #5 of the Stroke & Stride Series. And so while the user friendly swim course was set to take maximum advantage of the stiff south-westerly breeze blowing down the bays, pay back time was to come later that evening. Not too much later in fact. More like the minute or two it takes most competitors to charge from one end of the transition to the other, stopping briefly on the way to change from their swim gear into some running shoes. Then for the first half of the out and back run to Mission Bay it was head on into that same wind that had been helping you along for most of the swim.

Accordingly impressive swim times were the popular order of the day with Rebecca Nesbit fulfilling her pre race prediction and leading the girls from the water in a shade over nine minutes for the 750 metre blast round the buoys. Just seconds behind was Juliet Tompkins, while current Series leader Marisa Carter was only 15 seconds further back. With the clock showing ten minutes a pack of a dozen swimmers including Hayley Swaving, Desiree McCarthy and Naomi Calder hit the beach and raced up the steps into transition. Not to far behind was Heidi Alexander in 10m19s and Nicole Cope in 10m 40s. So far this season the top women had been sharing the wins about but Marisa Carter changed all that as she backed up her win from Race #2 with a repeat victory in this event. Nicole Cope all but erased her swim deficit over the 4 kilometre run finishing second just five seconds later. Kirsty Whiting had her best finish of the season to date with a rock solid third place. In a stunning debut in the Stroke & Stride, Joanna Lawn edged out our reigning Series Champion Heidi Alexander for fourth spot.

No matter what the distance, no matter what the conditions, it’s a safe bet this season that at the end of the swim the first two men to emerge from the water will be Brent Foster and Adam Jackson. And Race #5 wasn’t going to be any different as our dynamic duo again lead the way clocking a super quick eight and a half minutes. This was good enough for a fifteen second lead over Daniel Pritchard who was all alone in third and the only other swimmer to go under nine minutes. Adam Jackson was reported to have some shoe lace problems out on the run course but still cruised through for a comfortable second place. Clark Ellice hammered the run to move up to third just ahead of Dean Foster who in turn just held out Liam Scopes. Oh, did I forget to mention that Brent Foster won the men’s race again or had you already guessed that result?

After five races the Phase Grand Prix is starting to hot up as athletes chase vital points to secure their share of the prizes up for grabs. Marisa Carter and Brent Foster both know what it takes to win the Series and both have opened up handy leads over their competition. Heidi Alexander, Nicole Cope, Kirsty Whiting, Juliet Tompkins and Anna Cleaver have all got over the 40 point barrier and will be looking to put turn up the heat in the final events. While in the men’s field there’s a real log jam at the top of our leader board with Chris Williams, Clark Ellice, Adam Jackson, James Morgan and James Elvery all with 40 plus points and all in with a chance with three races remaining.