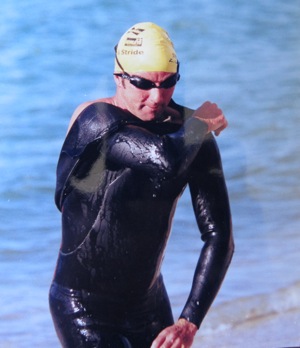 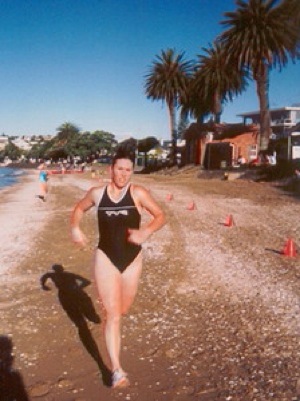 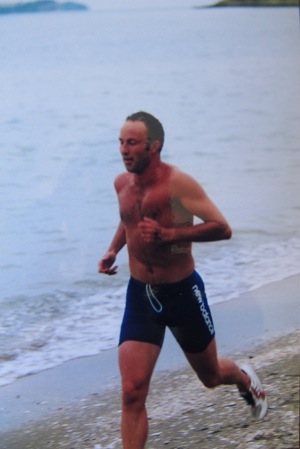 Race #6 in this season’s Stroke & Stride Series saw columns of white caps marching down the Waitemata Harbour and spray flying from the battered yachts racing out on the water. These conditions were all thanks to the gale strength Easterly again blowing through Auckland. The towering cliffs beside Ladies Bay provided some protection to St Heliers Bay enabling the 500 metre swim to be conducted in relative calm. Perhaps more daunting for competitors would be the return leg of the 5 kilometre run into the teeth of the wind.

Once again Rebecca Nesbit was in a class of her own throughout the swim leg having opened up an eight second lead over Marisa Pentecost and Debbie Tanner with Naomi Calder, Kirsty Whiting, Yoko Hori and a host of others all following in close succession. This mix of distances was expected to favour the runners and in the races to date it had been Heidi Alexander and Nicole Cope who had been clocking the fastest run splits. After today’s swim Heidi set out on the run with a 60 second deficit with Nicole a further 20 seconds behind. No gasps of surprise were heard when defending Series Champion Heidi Alexander rounded the turn from Kohimarama Beach with a handy lead and ran through for her fourth victory of the season. Perhaps this season’s revelation in the women’s field has been the 1993/94 Series Champion Marisa Pentecost having her best season for years. This time out Marisa combined a gritty run with her stellar swim to hold out Nicole Cope for second by just two seconds. Nicola de Lautour and Debbie Tanner cat and moused it out throughout the run before Nicola got the upper hand in the final few hundred metres and took fourth spot.

Craig Tulloch’s surf background means he likes the swim the rougher the better and obviously today’s conditions were to his liking as he lead the men from the water in a shade over six minutes. A 500 metre swim doesn’t do much to separate them out and a stream of men quickly followed him into transition. A lot of attention had been focused on Rodney Gordon leading into this event with many saying that his improvement through the season and today’s mix of distances could make him the man to beat. Rodney was looking at a 70 second deficit as he swapped from wetsuit to running shoes in the transition area.

Well Rodney eats up the miles on the run like others eat up the contents in their race packs and he grabbed the lead and then the win in convincing manner. This was Rodney’s first ever victory in a Stroke & Stride and just to give you an idea of how tough this accomplishment is to achieve; the last time we had a first up winner in the men’s field was way back in February 1997. Then we had Clark Ellice and 15 year old Chris Williams in second and third respectively. Fourth place went to that long time campaigner Dean Foster with the speedy Paul Angland in fifth.

Heidi Alexander and Brent Foster continue to lead and look secure in their bids to win another Series Grand Prix. Marisa Pentecost is the closest of the women while Rodney Gordon has now slipped past William Green into second place. Six races down, two to go.