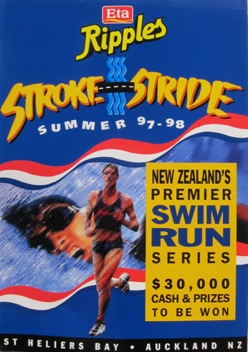 The Weather God is looking after the Eta Ripple Stroke & Stride competitors.  For most of the day of Race #4 it was blustery, but the wind calmed down before the athletes hit the water at St Heliers Bay for the start of the 1000 metre swim.  lt was a month since the last race and some competitors may have been rusty after the Christmas break.  However the Series group of top five men and women were far from rusty.  Many had raced in multisport events over recent weeks while other had competed in the Auckland Swimming Championships.

Despite immense pain from a knot in her calf muscle, Heidi Alexander, who has won just about every race going this season, notched up yet another victory in the fourth race of the Series.  Nicola de Lautour was unable to capitalise on a repeat of the distances of Race #3 with another win this time.  On this occasion she finished sixth behind Debbie Tanner, Sue Clark, Fiona Docherty and Heather Evans.  The reigning Series Champion, Debbie Tanner was pleased with her second placing which is her best finish for the season.  Nikki Wills and Nikki Tanner lead the women’s field from the water with a 20 second lead over Debbie Tanner and further 20 seconds back to the chasing bunch that included Louise Soper-Schofield, Megan Dalton, Katie Bennett and Heidi Alexander.  Heidi Alexander’s seventy-two second deficit after the 1000 metre swim didn’t last long as she again showed a clean pair of heels to the rest of the field over the 3 kilometre run.  Debbie Tanner held out Sue Clark by a handful of seconds with Fiona Docherty and Heather Evans following in quick succession.

John Munro was allowed to take the drivers seat for this spin around the buoys and he was the first man to emerge from the water with Brent Foster and Nathan Richmond firmly attached to his toes.  Twenty seconds behind these three, Robbie Baff and Will Green were battling for fourth place as they hit the transition.  Out onto the run course and Nathan Richmond and Brent Foster quickly dispensed of John Munro and then went head to head at the front of the field.  When they retumed to St Heliers Nathan Richmond had a small lead which he held for the sprint up the beach to finish just six seconds clear of Brent Foster recording his third win from four starts this season.  Nathan Richmond was very surprised with his win as he was in his “last faze of training”.  Boy Wonder Will Green got up for third, for the third time this season.  Bryan Rhodes ran through for fourth ahead of Vaughan Skiffington.