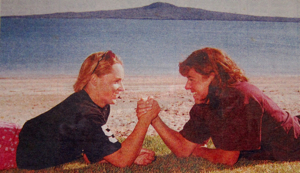 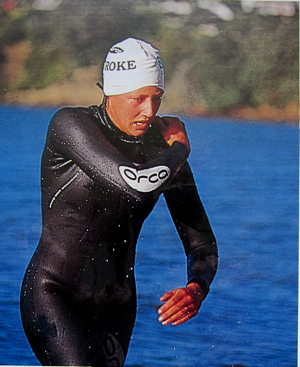 The final race in the Stroke & Stride Series is also the New Zealand Swimrun Championships for 1996 which meant there’s a lot riding on this race for the top athletes.  Held over a 750 metre swim and 5 km run, the race carried double points for those athletes chasing the money in the Series Grand Prix.

Leading the women’s Grand Prix was Megan Dalton, just ahead of Jackie Read with Suzanne Clark and Tracey Laurence also well placed.  ln the men’s field, Nathan Richmond was leading Brent Foster while Malcolm McGregor, Chris Andrews and Brendon Downey were all needing strong races to finish in the money.  Adding spice to this race were the season’s national triathlon champions Megan Evans, Paul Amey and Rodney Gordon who had turned up to race.  Megan Evans had revealed her hand in Race #7 with a 20 second victory while Paul Amey and Rodney Gordon brought their much feared running reputations to the event.

Competitors in this season’s Series had enjoyed one of Auckland’s best summers for years with repeated races in fine weather.  This streak looked to be at an end as Auckland was battered by high winds, rain squalls and hail through most of the day.  Amazingly half an hour before the start the rain stopped, the wind eased and the sun came out.

The women were started ten minutes ahead of the men and once again Jackie Read had opened up a lead as they exited the water.  In the men’s race, Brent Foster had some company on the first two legs of the swim but on the final leg into the beach he swam a course perpendicular to the shore while the chasing men chose the more conservative angled return to the beach.  This move gave the crafty Brent Foster a whole one minute lead out of the water which was reduced to 30 seconds by the time he ran to the transition area.  The swim times for the major players were:

The 5 km run featured a double out and back, the first turn was just past Kohimarama.  The second was adjacent to Ladies Bay and included the nasty climb up Cliff Road.  At the first turn Jackie Read still lead the women’s field while Suzanne Clark had moved into fourth and was closing on our top three.  Back at St Heliers with a mile to go Megan Evans had gone to the front with Megan Dalton and Jackie Read hanging on.  Suzanne Clark had now closed to 40 seconds.  When they returned to St Heliers and the finish line Megan Evans had added the New Zealand Swimrun Championships to her list of titles for the season and shown a huge improvement on last year’s 6th place finish.  Suzanne Clark finally caught Megan Dalton and Jackie Read over the final 800 metre to take second.  Megan Dalton held out Jackie Read for third and also ensured her victory in the Series Grand Prix.  Tracey Laurence rounded out the top five ahead of junior Debbie Tanner in sixth, while Linda van Uden had her best race of the season finishing in seventh overall.

Brent Foster held his lead for the first 3 km but heading into the final mile Paul Amey had made up most of his swim deficit and was just 5 seconds behind.  Going up the hill to the Ladies Bay turn, Paul Amey finally wrestled the lead from Brent Foster and ran on to victory and the New Zealand Swimrun Championship.  Brent Foster has been in tremendous form all season and took second place which gave him a comfortable win in the Series Grand Prix for the fourth year in a row.  Rodney Gordon was another to have an excellent run split as he blazed his way into third ahead of Nathan Richmond.  Chris Andrews, Malcolm McGregor and Brendon Downey finished in that order to round out the top placings and settle their battle in the Series Grand Prix.