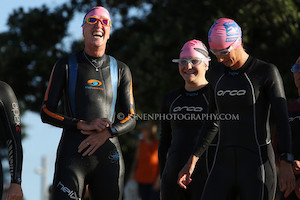 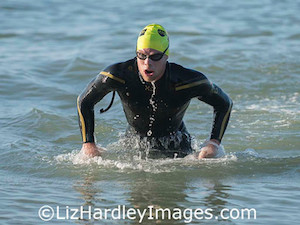 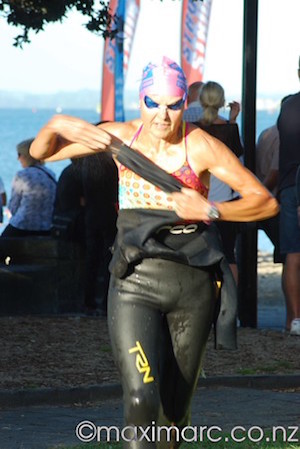 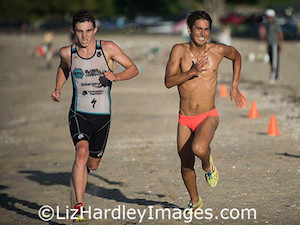 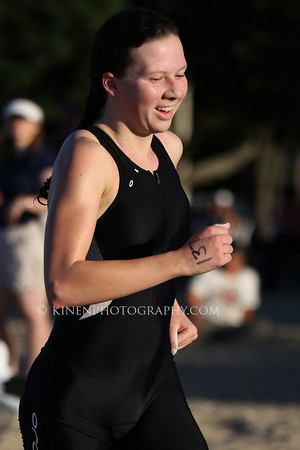 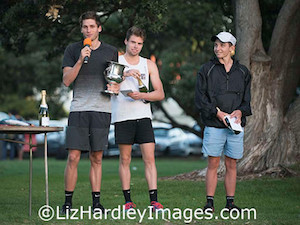 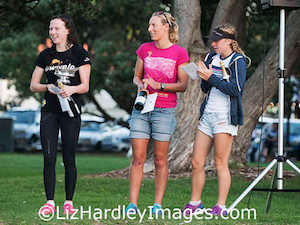 Heading into the season finale both the athletes leading the Series Grand Prix had handy but not insurmountable leads.  Defending Series Champion Rebecca Clarke had a six point gap over her nearest rival Jacey Cropp while Cooper Rand was eleven points clear of his pursuers.  If we look back two years we had the same two athletes leading their categories going into the final when Cooper Rand was cruelly robbed by injury on the eve of the final event.  This time Cooper had stayed healthy but would you believe it was Rebecca Clarke unfortunately sidelined with a debilitating injury and unable to defend her titles.

Race #3 in the Stroke & Stride Series doubles as the New Zealand SWIMRUN Championship for 2016 giving even more weight and importance to this final duel on the waterfront.  The large crowd assembled at Mission Bay were treated to picture perfect conditions as Auckland laid on a sparkling day with plenty of sunshine and warmth around on an afternoon in March.  Even Auckland’s perennial afternoon wind decided to puts its feet up and watch the event once race time arrived leaving the sea smooth and the run course fast.

The men’s field were underway with a bang over the big 1000 metre triangular course and by the time the first buoy was reached one swimmer had already moved clear of the field.  A sizzling elapsed time of 11 minutes and 12 seconds saw Trent Thorpe touch the shore good enough for a whopping 53 second lead over the chasing pack starring the magnificent seven, namely: Trent Dodds, Matthew Franklin, Dan Hoy, James Matthews, Cooper Rand, Kyle Smith and Tommy Trees.  Jan Such was a further 20 seconds in arrears and Quinn Wallwork was giving up another half a minute.

While the men got into their running and jockeyed for their final placings it was the women’s field churning up the waters on their swim.  At the front it was Jacey Cropp with another outstanding swim breaking clear and opening up a twelve second lead to hit the beach in 12 minutes and 31 seconds.  Next to arrive was Teresa Adam followed by Natasha Bowyer in 12 minutes 58 seconds and Isabella Morton with a time of 13 minutes 45 seconds.

Trent Thorpe started the run around the waterfront with a sizeable lead however he was being chased by a sizeable pack of talented runners who had the advantage of keying off each other as they set out to make inroads into the swim leader.  Four kilometres of running later it was still all Trent Thorpe as he ran up the beach to take his first ever win at the Stroke & Stride and claim the title of New Zealand Swimrun Champion for 2016 with a tremendous wire-to-wire victory.

So while the fast running bunch couldn’t catch Trent they could still engage in a Battle Royale to sort out who would be joining him on the podium.  Again it was Dan Hoy displaying the fastest pair of legs on the course running himself up into a comfortable second placing.  Kyle Smith was racing Stroke & Stride for the first time and came away with an impressive bronze on debut.  This left Trent Dodds and Tommy Trees sprinting in for fourth place with one of the closest finishes we’ve witnessed and when it was sent upstairs to the judges they couldn’t be separated.

Likewise Jacey Cropp also had a useful lead going out onto the run course following her strong swim however she couldn’t afford to relax needing to continue to press the pace all the way to the turn cone down the waterfront at St Heliers Bay and continue right to the finish line at Mission Bay.  Turns out this time no one could match Jacey as she ran superbly and records her first ever Stroke & Stride victory by a generous margin and captures the New Zealand SWIMRUN title as bonus.  Teresa Adam is another fine swimrun athlete and past Stroke & Stride winner and while her run couldn’t make any inroads on first place it was enough for her to consolidate her second placing.  Another former winner Ashleigh Williams utilised the fastest run of the day to capture third place.  Natasha Bowyer held on for fourth ahead of fast finishing Katherine Badham.

The Series Grand Prix decides the overall Stroke & Stride champions with points awarded through the Series.  To win these trophies a competitor needs to have a good share of athletic prowess and just as importantly the consistency to perform and stay healthy over those five long months of summer.  One is also required to beat home all those other outstanding athletes frantically vying for the prize.  It seems winning has never been more difficult as no athlete scored more than one win all summer.

With a couple of seasons under her belt Jacey Cropp (5th, 3rd & 1st) just got better with every outing as she took her game to a new level and is rewarded with the deserved title of Stroke & Stride Champion for the summer.  Having won the Series for the past two seasons Rebecca Clarke (2nd & 3rd) was on track and one result away from a three-peat before being derailed and forced into settling for the overall runner up position.  Matching her result from last season is Katherine Badham (6th, 8th & 5th) in third place and just a solitary point ahead of Teresa Adam (5th & 2nd) and Ashleigh Williams (4th & 3rd) who were all tied up for fourth place overall.

Over the decades we don’t see a lot of new Men’s Champions at Stroke & Stride however this season Cooper Rand (1st, 6th & 7th) made the best possible start and then did enough to ensure that it was his name being engraved on the Stroke & Stride Cup.  Four points behind our worthy winner was the man that was the dominant force at back end of summer and perhaps rueing missing the first event, Trent Thorpe (3rd & 1st) takes the silver.  Trent Dodds (2nd & 4th) and Matthew Franklin (4th, 8th & 8th) travelled different routes but ultimately arrived at the same destination tied on points in third position and holding a couple of points advantage over Tommy Trees (3rd & 4th) in fifth overall.