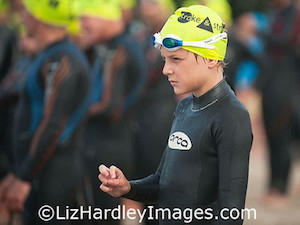 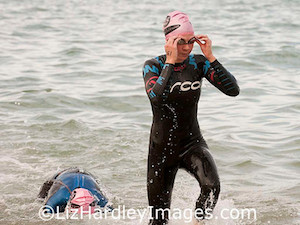 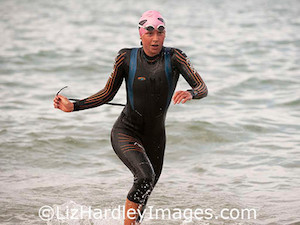 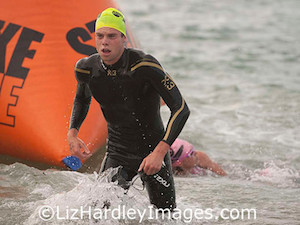 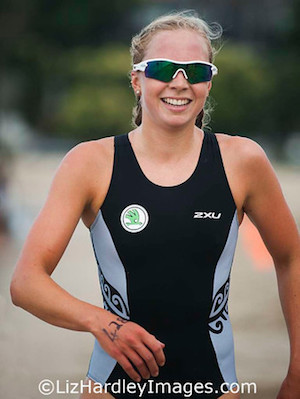 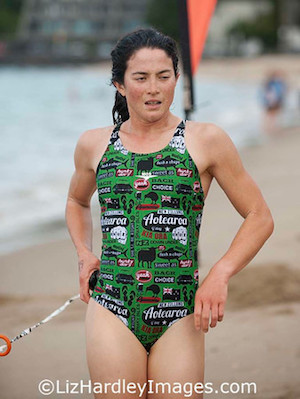 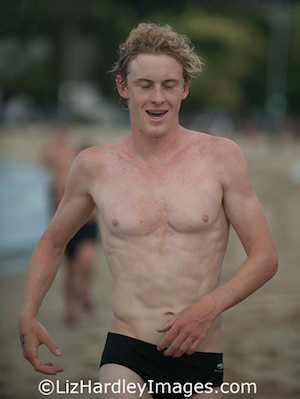 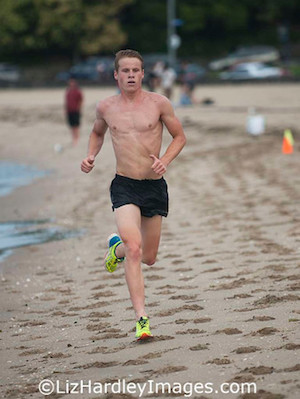 It is not often we add a new member to that select club of athletes that have scored a victory at Stroke & Stride and it is an even more rare occurrence for two to gain entry on the same day. Race #2 in the Stroke & Stride Series also heralds the start of a new year and for many a return from holidays. Now is the time to reveal if that lazy summer break was mixed in with some swim and run training or was it just kept busy feet-up relaxing.

Auckland’s weather over the past few weeks has ranged from the best of summer days to the best to stay indoors type of days. The second race in the series fortunately was awarded one of the better days to be at the beach with more sunshine, less wind and none of those pesky unseasonal downpours. By 6.15pm when the athletes lined up on the shore at Mission Bay for the start of the 1000 metre swim the prevailing conditions were set for some interesting racing. There wasn’t a lot of wind however the few knots that were around was a northerly sea breeze aimed directly onshore so it did chop up the swim course to a small degree.

The women’s field started first and some of them looked to be having a hard time of it as they punched their way out to the first turn buoy of the big triangular course. A couple of cans later at swim’s end it was Jacey Cropp with Rebecca Clarke for company with the best navigation and a handy 20 second lead touching the shore in 12min 31sec. Then came Nicole van der Kaay recording 12 minutes 51 seconds alone in third place. Strung out behind our trio of swim leaders came the contenders including Teresa Adam 13 minutes 25 seconds, Deborah Lynch 13 minutes 50 seconds, Pauline Thorp 14 minutes 5 seconds, Rose Dillon 14 minutes 30 seconds, Isabella Morton 14 minutes 58 seconds and Katherine Badham 16 minutes 10 seconds.

The leading men weren’t fazed at all by these swimming conditions and it was quickly a white hot pace at the head of the field. Just 11 minutes and 39 seconds after they started the dominating figure of Trent Thorpe was leading from the water and running up the sand. He had just a handful of seconds advantage over Tayler Reid with this pair of aquatic masters having broken well clear from the rest of the men’s field. Jackson Cropp, Sam Ward and Liam Ward teamed up to clock just over 12 minutes for their swim legs decisively clear of Matthew Franklin 12 minutes 22 seconds, Fynn Thompson 12 minutes 24 seconds and Cooper Rand 12 minutes 30 seconds.

The 3 kilometre run takes you around the point and into Kohimarama beneath the shade of the pohutukawas lining the road to the turn cone, then back to Mission Bay and the finish on the beach. Not a great deal of real estate there to make too much time up. Nicole van der Kaay ran hard out of transition intent on catching the two athletes 20 seconds up the road and once she got herself into the lead she had to continue at pace to hold onto that lead until she reached the finish line. This she ended up doing with aplomb as she recorded one of the day’s fastest runs coming home with a healthy lead to record her first ever victory in a Stroke & Stride. Defending Series Champion Rebecca Clarke has won numerous Stroke & Stride events but not so far this season though she still ran herself through into a handy second place finish. Another having her best Stroke & Stride result ever was our swim leader Jacey Cropp as she backed up with a solid run to score a splendid podium finish ahead of debutante Deborah Lynch and returning Teresa Adam.

Backing up a super quick swim with a matching run is never an easy task but this is what Trent Thorpe and Tayler Reid had to now dig deep for as they knew they had a double dose of lethal leg speed from the Ward brothers intent on hunting them down. In a swimrun event running very fast for the first few kilometres means stepping into a whole new world of hurt and has left many fine athletes shaking their heads in regret. This time however Tayler Reid was up to the task and he scorched that run leg to hold on for a tremendous first place in his first ever Stroke & Stride. The fastest run of the day paid dividends for Sam Ward with a fine second place finish. Trent Thorpe’s run isn’t too far behind his outstanding swim and he held it together over the 3 kilometres to complete the valuable podium. Running in in fourth place was Liam Ward and Fynn Thompson finished fifth.

A series consisting of three events means an all new series of computations for those athletes intent on topping the Grand Prix that decides the Series Champions. There is a collection of two way ties and more after Race #2 with just one race remaining to sort out the final order. Reigning Champion Rebecca Clarke’s two podium finishes allows her an advantageous but not unassailable lead. Breathing down her neck and capable of spoiling that party are Jacey Cropp, Sophie Corbidge, Nicole van der Kaay, Katherine Badham, Yuko Takahashi, Ashleigh Williams, Isabella Morton, Pauline Thorp and Deborah Lynch.

Cooper Rand’s nine point advantage has the rest of the men’s field on the ropes however there are thirteen guys that haven’t been counted out yet. Primarily amongst them are the ever dangerous Matthew Franklin, Jake Allen, Tayler Reid, Trent Dodds and Sam Ward. We also should not discount that the final event is seven weeks away and a lot can happen and change in that space of time.

The deciding Stroke & Stride finale is on Wednesday, 9 March, 2016.