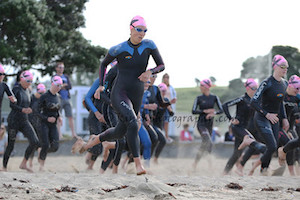 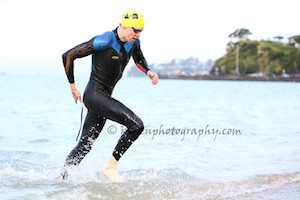 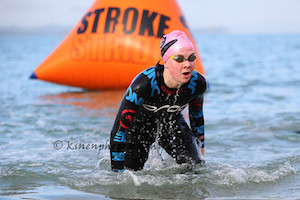 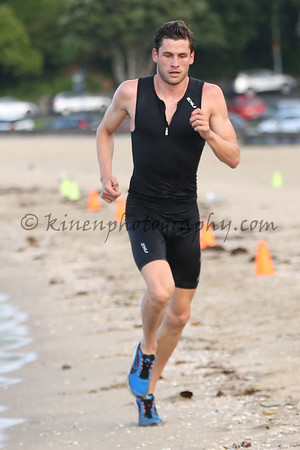 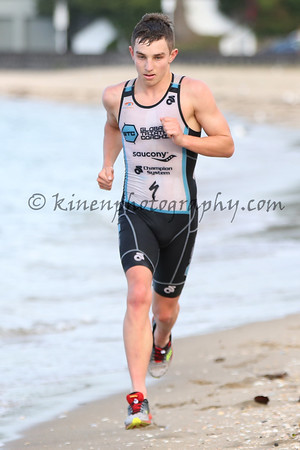 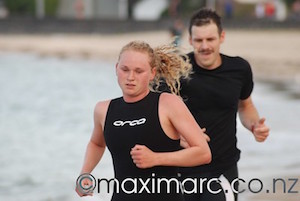 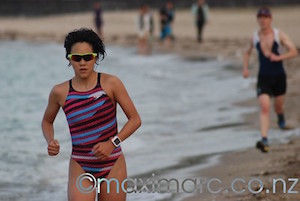 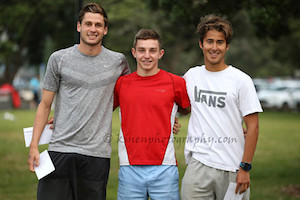 The first race back after the long winter off season can be a cause for trepidation even amongst the most experienced of swimrun athletes. Race #1 at the Stroke & Stride is when all your training or lack of will be revealed not to just to the competition and the watching crowd as it can also be a wake up call for the athletes themselves. It is very difficult and for some impossible to replicate the grueling nature of a race in even your most intense training workouts.

If you’re going to be visiting a world or pain you may as well be enjoying a beautiful day in a gorgeous location. And that is what was served up at magnificent Mission Bay basking beneath the warmth of the afternoon sun. The forecasters may have wanted all of Auckland armed with umbrellas however it was sunscreen that was the most popular accessory for beachgoers. The lightest of onshore breezes from the north hardly ruffled the waters of the Waitemata as we got set for a start to the racing.

The men’s field were first away over the 750 metre swim course and while the bulk of the field were splintered even before halfway the fast group at the front of the field stayed fairly close right the way around the rectangular course. Jackson Cropp was the first to show his hand as he lead the guys out and around the swim course recording a scorching 8 minutes and 33 seconds at swim’s end.  Ten seconds later Matthew Franklin hit the shore with Cooper Rand alongside.  Going into transition these three held a good buffer over the rest of the men who all clocked nine minutes and change.

Having the opportunity to observe the men navigate the course may have paid dividends for the women as they really flew around the course and by the time the fastest of them reached the beach there was cracks starting to appear with the pursuers falling off the pace.  Jacey Cropp matched her brother recording the day’s fastest time of 8 minutes and 50 seconds with last season’s Series Champion Rebecca Clarke just seven seconds in arrears. We then clocked Ashleigh Williams 9 minutes 11 seconds, Sophie Corbidge 9 minutes 17 seconds, Yuko Takahashi 9 minutes 18 seconds and this talented trio had each recorded fine wins themselves the previous season.

Like the swim the run leg was unaffected by any adverse weather conditions and the only hindrance might have been the bright sunshine in your eyes as competitors strode out on the return leg after rounding the cone at St Heliers Bay.  Add on another couple of kilometres on your return to Mission Bay and the four kilometre run was complete.  We were enjoying one of the warmest afternoons Auckland had been subjected to for many months so we’ll blame that for any red faces worn by some of the runners as they closed in on the finish line.

Turning up the heat was also Cooper Rand and he was soon pouring on the pace to distance himself from the few guys that had hung with him on the swim.  He then romped home to take the victory with ease with the closest challenger being Trent Dodds on the back of his outstanding run leg getting him up into second place for his best ever result at Stroke & Stride.  First timer Tommy Trees from Japan got up and secured that valuable third place finish seconds ahead of Matthew Franklin with Jake Allen holding on for fifth place in his first ever Stroke & Stride race.

The leaders in women’s field headed out onto the run not too far apart, all knowing that this race was going to be decided on the road as they had all swum well and no one had got away during the swim leg.  It turns out on this occasion the fastest legs belong to Sophie Corbidge.  When that was added to the wealth of experience she has gained since winning her first Stroke & Stride race eight years ago it proved an inimitable combination as Sophie opens her account for this season with an impressive victory.  Not too far off the pace Yuko Takahashi ran home in second place recording her own fine start to the season.  Rebecca Clarke completed the podium this time holding off Ashleigh Williams and Jacey Cropp.

As it has done for decades points awarded and accumulated in the Series Grand Prix decides the Stroke & Stride Champions every season. What is different in 2015/2016 is that there are no second chances, an athlete can’t afford to miss an event or even record one poor placing as there is unlikely to be an opportunity to make up lost ground.

So with a third of the Series already in the books the favourites for the women’s title must be Sophie Corbidge, Yuko Takahashi, Rebecca Clarke, Ashleigh Williams, Jacey Cropp, Katherine Badham, Ilaria Zane, Molly Swanson, Charlotte Gordon and Isabella Morton.

Further factors to consider is that the final event is still fifteen long weeks away and five of the above mixing it up are international athletes.

Action at the Stroke & Stride resumes in the new year with the second race in the Series set to go on Wednesday, 20 January 2016.