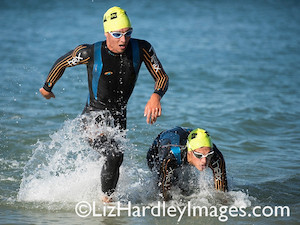 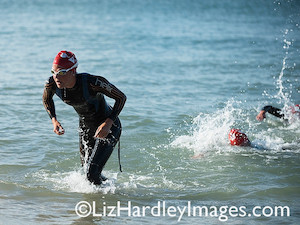 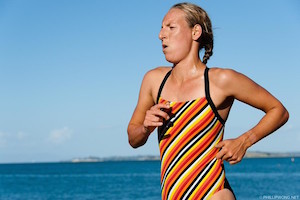 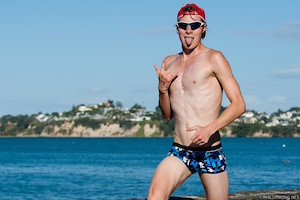 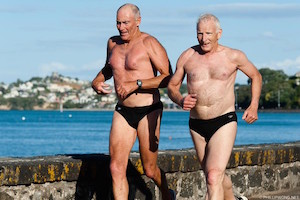 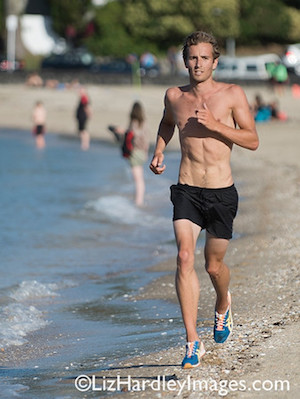 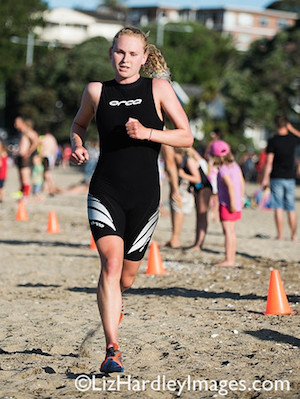 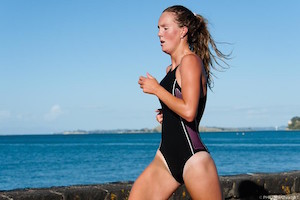 The first event of 2015 in the Stroke & Stride Series was staged atop the golden sands of Mission Bay and in the clear blue waters of the Waitemata Harbour. Race conditions were about as good they can get on a mid-summer’s afternoon in Auckland; the lightest of offshore breezes, plenty of sunshine and warm, very warm. Actually it was hot as at the beach and not just the thermometer reading. The competition had also reached boiling point at Stroke & Stride #4 with a stacked field of contenders vying for the win. If there was ever a clash of champions then this was it.

This event was a repeat of the swim heavy distances from the December race. The men’s field started first this time and midway through the 1000 metre swim a duo of swimmers had got the jump on the chasing posse that they extended even further over the final leg. Super talented swimmers Cameron Todd and Jay Wallwork swam shoulder to shoulder into the beach clocking 11 minutes 46 seconds for the kilometre and there wasn’t another swimmer even close as they navigated their way through transition and out onto the run course. Finally a full minute behind Fynn Thompson was the best of the rest and he was all on his own in third place as he commenced the run. Another 20 seconds passed and then the men’s field started to hit the shore in numbers with Quinn Wallwork, Trent Dodds, Jez Sherman, Matthew Roets, Thomas Trengrove and James Matthews to the fore.

Auckland’s main harbour was made for fast swimming this afternoon and its unruffled sea state was next disrupted by the women’s field as their flailing of arms circumnavigated the big rectangular course. It was Rebecca Clarke out first in 12 minutes 25 seconds and that torrid tempo she had maintained in the swim earned her a handy 20 second advantage over the dangerous trio of Simone Ackermann, Sophie Corbidge and Elise Salt with nothing between them. Then followed another 20 second interlude before the likes of Maddie Dillon, Molly Swanson, Teresa Adam and Rebecca Spence got some sand between their toes and only a 3 kilometre run between them and the finish line.

As mentioned our clash of champions was a star studded affair and between them Cameron Todd and Jay Wallwork had sewn up the New Zealand Swimrun Championship for the past four years. Cameron taking three back-to-back titles and Jay the 2014 champion. Jay Wallwork had also completely dominated racing at the Stroke & Stride for the past 10 months and was starting to look unbeatable. Therefore some eyebrows may have risen when near the end of the out and back run leg it was Cameron Todd running onto the beach in first place having regained his unmatched speed that we’d missed for the past couple of seasons and going on to take his 12th ever Stroke & Stride victory. No disgrace in coming second to that pedigree for Jay Wallwork while Finn Thompson secures his second podium and stays clear of Trent Dodds’s best ever finish and with Quinn Wallwork rounding out the top five.

The run is only three kilometres and takes the runners out to the end of Kohimarama before the fast trip back to the finish at Mission Bay and barring disaster the top four women starting the run were expected to be the top four at the finish. But would the places get shuffled? The good news is that there was no mistakes out on the road and the good news for Sophie Corbidge was that she had the legs to get up for the win at this super competitive race. Applying pressure from the start rewarded Rebecca Clarke with the runner up spot. Hard charging Simone Ackermann finally finished in third, Elise Salt completed the illustrious quadfecta while Maddie Dillon closed out the top five. And who were the champions in the women’s field? Well Rebecca Clarke is the reigning Stroke & Stride Champion. Sophie Corbidge was the champ before her and Simone Ackermann has been Series Champion for no less than four times. Add in Elise Salt and between them our first four female finishers today have won 35 of the past 60 Stroke & Stride events.

That sort of competition has got to shake up the standings in the Grand Prix in the race for this season’s title of Stroke & Stride Champion. However our leaders since the first round still sit atop the points table. Ashleigh Williams has survived the two long swim/short run events with a lead of two points over Rebecca Clarke while her namesake Rebecca Spence has climbed up into third ahead of Katherine Badham and Danielle Parkinson.

At halftime in the Series Jay Wallwork is sitting pretty in first place holding a massive 34 point lead. Fynn Thompson may be racing Stroke & Stride for the first time this season however he has raced like a seasoned pro and holds second place in the competition for the overall title with Quinn Wallwork nipping at his heels just four points adrift.

The second half kicks off on Tuesday, February 3rd with a milestone event that has been a long time coming.