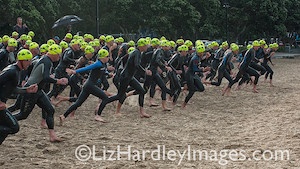 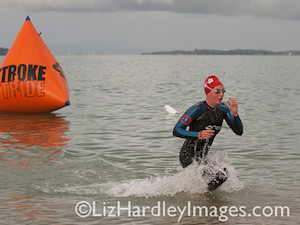 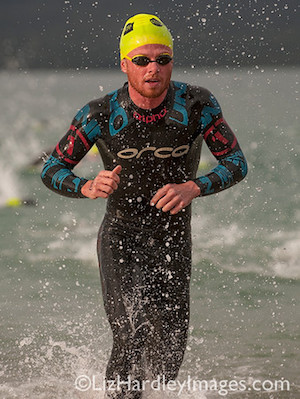 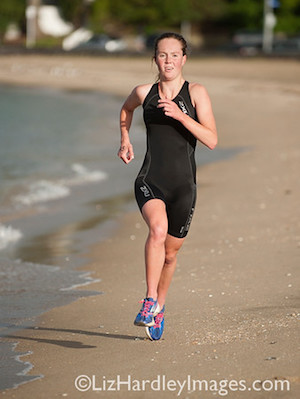 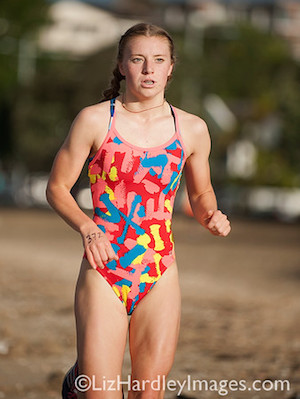 The commencement of a new season provides a fresh start for the series and competitors with a number of new faces ready to mix up with the more experienced campaigners.  Conditions for Race #1 of the Stroke & Stride were certainly benign without a breath of wind to disrupt the Waitemata Harbour and then just minutes before the start a light shower of rain to complete the cleansing process and usher in the new season.

So with the swim being pancake flat and only measuring 500 metre it was never going to totally decide the winners however it was also where a race can be lost.  The women’s field got things rolling and they made short work of the little rectangular course and were around the cans and closing on the beach after just six minutes of furious aquatic action.  First out of the water and running up and into transition was Hannah Williams clocking 6min 33sec with a dozen seconds of advantage over Danielle Parkinson who in turn had another precious dozen seconds lead over Molly Swanson.  Once the clock ticked over seven minutes the gaps were reduced even further and likely contenders such as Ashleigh Williams 7 minutes 10 seconds, Rebecca Spence 7 minutes 19 seconds and Katherine Badham 7 minutes 34 seconds were all in the hunt heading out onto the run course.

The men’s field by this time were also now underway and they were doing their best to extract any advantage possible over the tight swim course.  Perennial swim leader and Stroke & Stride Series Champion Brent Foster just managed to get away from his pursuers on the final leg back into the beach clocking 5 minutes 56 seconds for the swim which was good enough for a slender five second lead over the dangerous Jay Wallwork.  And from then on every man and his wetsuit was jumping forth from the water and sprinting up the beach for part two of the race.

Out on the run course conditions were also made for speed with no hills, no wind and no speed sapping heat to contend with.  The 5 kilometre run was over an out and back course from Mission Bay winding around the picturesque waterfront as far as St Heliers Bay.  For the crowd of spectators waiting back at Mission Bay the first runner to round the final bend and return to view was all on her lonesome and this wasn’t surprising as she looked to be flying.  Fleet-footed Ashleigh Williams had backed up her solid swim with an outstanding run leg and was rewarded with her first ever Stroke & Stride victory. The closest challenger was Katherine Badham also burning up the run course and finishing in second position to record her best ever result.  Completing the podium was Rebecca Spence who has stood on the Stroke & Stride podium before however that was a decade back so very pleasing to see this talented athlete’s return to the series.   Martina Fellmann held on for a hard-fought fourth place finish just seconds ahead of Molly Swanson.

The last time Jay Wallwork raced he had come away victorious and taken home the 2014 New Zealand Swimrun Championship title.  Seems the off-season hadn’t been wasted as Jay starts this season just where he left off; a superb swim paired with a peerless run gives him back to back Stroke & Stride victories just eight months apart.  Keeping the pressure on throughout and finishing second is Tom Moyes another skilled athlete that we haven’t sighted in recent years but returning in 2014 in great form for his best ever result. He wasn’t too far ahead of an impressive Fynn Thompson debuting at Stroke & Stride and already getting himself onto the podium.  Five seconds behind Mark Bowstead stormed to the finish in fourth beating home the rest of the men’s field and even his brother James who was fifth.

On this renowned Tuesday in November a punter looking further afield than the four-legged races would have been hard pressed to pick the place getters at this Stroke & Stride.  It is very early days however the summer’s Grand Prix looks to be wide open and a very interesting proposition going into the next event set for Wednesday, November 19th.