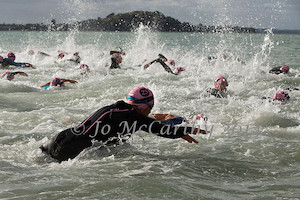 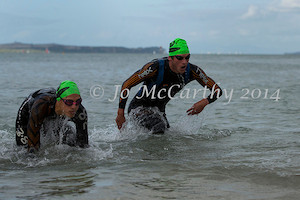 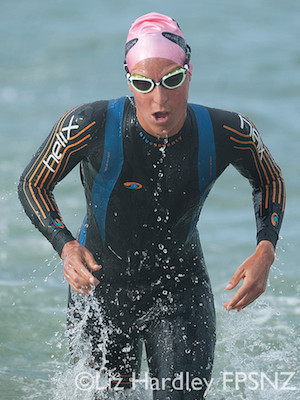 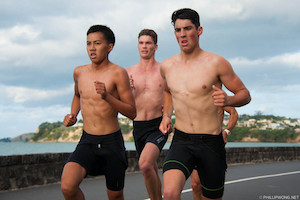 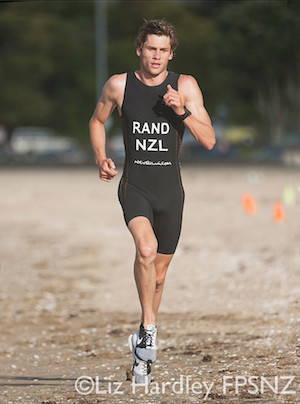 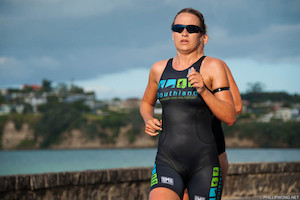 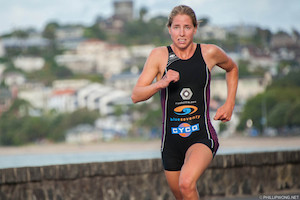 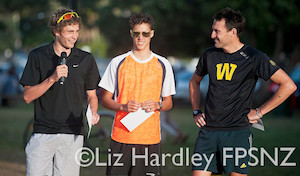 By the time Race #6 rolls around those that back their running prowess over anything they may lack in the swimming department are now in their element.  Never does the run get any longer or the swim any shorter than this edition of the Stroke & Stride Series.  Plus by mid February if the weather gods are playing the game the sea conditions should be sparkling and unruffled by any errant winds that can disrupt our late afternoons in Auckland. Sticking to the script the morning showers and gusting westerly were superseded by just a zephyr heading straight offshore by mid afternoon. So with millpond like conditions the charged up men’s field hit the water ready to circumnavigate the shortest swim on the Stroke & Stride calendar.

Five hundred metres is never going to provide much separation even with the ace swimmers at the head of the field with their foot on the accelerator doing their best to stretch them out.  Edward Rawles was having his first race of the season and just 5 minutes and 51 seconds after the gun he was first back on the beach with a handful of associates in close proximity.  And so with the clock still inside 6 minutes Jay Wallwork, Cooper Rand and the next pursuers arrived and soon a trickle turned into a flow and then a flood as clumps of three, six, ten or even more men hit the beach simultaneously and charged up the sand and towards the transition area.  Mixed in within this mass Liam Scopes was spotted recording 6 minutes 32 seconds for his swim.

The women’s field had a grandstand view and could watch all this action unfold and maybe pick up some tips before they embarked on their swim.  However with no wind, no waves and no current to contend with it was very much a case of starting fast, swimming straight and not touching the brakes until your hand hit the sand.  The first to stand up at the end of the swim leg recording a white hot 6 minutes and 01 seconds was Rebecca Clarke with Penny Hayes a body-length behind and just a couple more seconds to Molly Swanson.  This trio had not only recorded outstanding swim splits but also surprised us having broken clear of the women’s field and we had to wait 30 seconds before the next swimmers arrived at the beach. Claire Macky clocked 6 minutes 43 seconds and that was pretty much the start of a continuous stream of female competitors exiting the water, transitioning and quickly departing for their run around the waterfront.

The out and back 5 kilometre run takes competitors as far as St Heliers and like the swim, conditions were made for speed – the question was now who has the most speed?  Jay Wallwork and Cooper Rand both have wins to their names this season and had stayed close throughout the swim and then through transition, now out onto the road they started the sparring to see who would come out on top in this edition. Despite giving away half a minute to the faster swimmers Liam Scopes was taking no prisoners out on the road as he started running his way through the field.  Inside the final kilometre the lead men came back into view as they rounded the point and closed on the beach it was Cooper Rand who had managed to go clear and he took his third victory of the summer.  Jay Wallwork got himself second for this race and Liam Scopes got up into third and his best result of the season to date. Speaking of great results it was Trent Dodds in fourth place with a break through performance and by far his best ever placing at the Stroke & Stride ahead of yet another athlete scoring his best ever result in Leo Roper.

Similarly over in the women’s race Rebecca Clarke and Penny Hayes both had recorded victories this season however would their healthy swim lead prove to be enough to fend off the charge of the recognised runners? Or should they forget about those in their wake and put their energies into just battling it out between themselves? Seems that running shoulder to shoulder for most of the 5 kilometres killed off the danger of any challengers coming through on them and with the finish line in sight it was the final sprint of Rebecca Clarke that made the biggest impression on the run course as she hit the line and logged her second triumph of the season. Seconds behind Penny Hayes ran home for her second second of the season while quite possibly the fastest run of the day lifted Amelia Watkinson up into third place. Ashleigh Williams repeated her fourth placing from a fortnight earlier while Molly Swanson didn’t waste her tremendous swim when she backs it up with a strong run leg to claim fifth and her best ever Stroke & Stride result.

Rebecca Clarke and Cooper Rand’s wins in Race #6 have also elevated them to the top of the Grand Prix standings which is exactly where an athlete wants to be three-quarters of the way into the season. Rebecca would probably prefer to have a little more than the tight two point lead she currently holds over Penny Hayes however these two talented swimrun athletes have been incredibly close all summer long right down to their matching lead-from-the-front racing styles. It seems only right that there’s nothing in it as this stage. Amelia Watkinson is still in contention currently holding third place while Ashleigh Williams, Claire Macky, Molly Swanson and Katherine Badham are each capable of elbowing their way onto the final podium.

Chasing Cooper Rand and doing their best to cement their own podium positions are Brent Foster and Jay Wallwork with the dangers being Michael Perree, Dan Hoy, Matty McCullough and Liam Scopes. Two more races provides ample opportunity for an upset or two so stay tuned.

The business end of this season and the penultimate Stroke & Stride is in a fortnight’s time on Wednesday, February 26th.