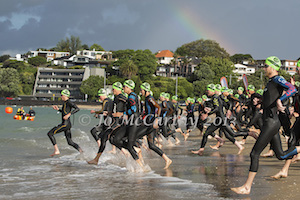 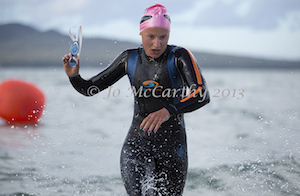 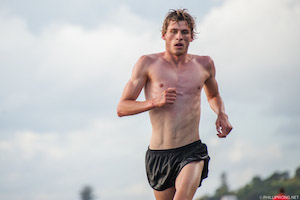 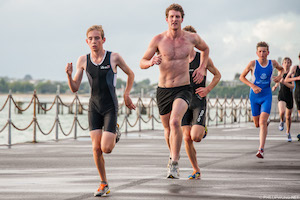 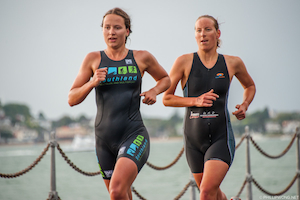 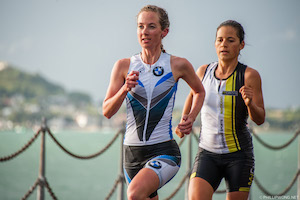 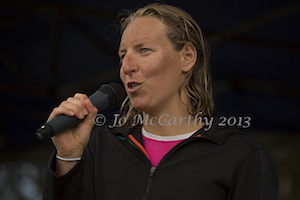 Windy afternoons in Auckland provide not everyone’s favourite swim and run conditions however it is does suit some. Most likely those that subscribe to the adage ‘when the going gets tough, the tough get going’ and once this day’s arduous racing was done it was a podium regular stepping up for his first race win and an athlete with a decade of racing under her belt securing a second ever win.

For the second event in this summer’s Stroke & Stride Series Auckland City dished us up a 20 knot northwest wind blowing straight down the beach that Mr Beaufort labels a ‘fresh breeze’ and this sounds not unpleasant. But when you throw in frequent gusts up to 30 knots that he’s labeled ‘near gale’ force then you know it will be a battle to make any headway into that.

The men’s field lined up at the swim start and stared out an initial 350 metre leg perpendicular to the aforementioned breeze; a very quick zap across the back before repeating the 350 metre haul back to shore. Sighting and navigation would be critical as not only was that wind pushing you sideways the outgoing tide was also heading out of town. Once underway the leading men held a good line and stayed on course while those further back were having more difficulty staying upwind when rounding the cans. The reward for the top guys was to record not-to-shabby times for the 750 metre swim with Brent Foster clocking 9 minutes 3 seconds with Jay Wallwork affixed to his toes and then all the leading contenders under the 10 minute mark. Carefully watching this unfold were the women’s field and this knowledge allowed them to adjust their aim or game-plan for the swim. This time the lead duo of Penny Hayes and Rebecca Clarke had built up a healthy 60 seconds advantage over their pursuers clocking nine and three-quarter minutes for the swim.

Once the race got out of the water and off the beach and out onto the road the breeze was still blowing but now it was an athlete’s friend and foe. To start with on the outward leg heading west towards the turn cone at Okahu Bay it was mostly making progress plain hard work and turning a flat plane run course into what felt like an uphill effort. Good news came at halfway when the second half of the 4 kilometre run had for the majority of the time the welcome assistance of a downwind run. A fortnight ago Dan Hoy got himself a ticket to the exclusive Stroke & Stride race winners club and the members must have left the door ajar because before we knew it Cooper Rand had backed up his rock solid swim with a blistering run leg and was scoring himself his first ever Stroke & Stride victory. Reigning Series Champion Brent Foster certainly wasn’t ready to let anyone else get past him and held on for second place leaving Jay Wallwork to repeat his third place finish from the first event. Multiple Stroke & Stride race champion Clark Ellice returned to the fray and sewed up fourth holding out Dan Hoy on this occasion.

The bulk of the women’s field faced two daunting battles as they exited transition and began their 4 kilometre run, not only did they have the wind in their face but they also had to make up the minute(s) they had lost to Penny Hayes and Rebecca Clarke while at sea. As it turned out Penny Hayes and Rebecca Clarke were very happy to be locked in a race with each other and this competition kept them clear of the chasers and just left it to be decided which of them would triumph in the final kilometre. Running down the beach to the finish line Rebecca Clarke had the slightest advantage but it was enough as she held it to the line and recorded her second ever Stroke & Stride success. Penny Hayes shows again she is a serious contender at the swimrun game running a very close second while the fastest run of the day delivers Amelia Watkinson her second podium finish of the season. Great runs also reward Samantha Warriner and Ashleigh Williams valuable places in the top five.

Two races in the book and two different male winners and two different female winners so no one is running away with the title this season. Amelia Watkinson’s tiny two point advantage over Penny Hayes who in turn is another two points ahead of two-time Series Champion Samantha Warriner only tells us that we are going to need more races to separate these three in their race for the Series Championship. And then keeping things ridiculously tight we have Rebecca Clark, Elise Salt and Ashleigh Williams in a dead heat for 4th.

In the mix with the men’s field are Cooper Rand leading with one race win, Dan Hoy in second with one race win, Brent Foster in third with more race wins than we can count and presently tied with Jay Wallwork who is showing the form to record his first race win in the not to distant future.

More from this enthralling drama will unfold when the third act of the season is played out on Thursday, December 12th.