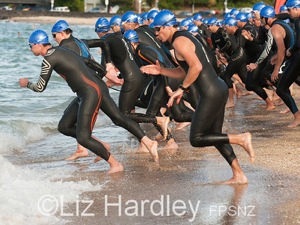 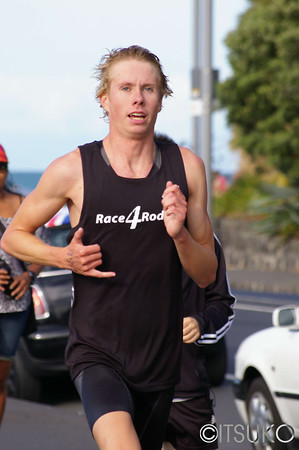 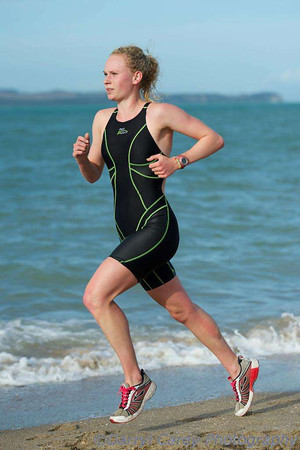 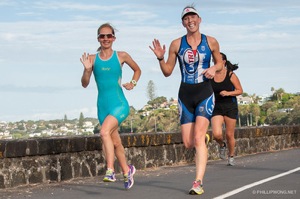 The Stroke & Stride takes a six week break for the Christmas holidays and when the racing resumes it is soon apparent who kept up their training and didn’t get distracted through the silliest of seasons.  Auckland has enjoyed mostly glorious summer weather through this period and the sunshine and heat was turned up for the first event of 2013 back at the beach.  Race #4 in the Stroke & Stride Series is contested over a 1000 metre swim and 3 kilometre run which replicates the distances of the previous event.  We even managed to organise a nice onshore breeze pumping in and pumping up the big chop that makes navigating an interesting task.

First to tackle the big triangular swim course was the men’s field and when the first swimmer rounded the first turn buoy 400 metres off the beach he had established a handy and growing lead.  This lead had blown out to a substantial 39 seconds by swim’s end and as expected it was local legend Brent Foster applying the pressure clocking 11 minutes 56 seconds and all on his own running up the beach, through transition and out onto the run course.  The chasers were in damage control mode now and Sam Franklin led them in with Sam Ward and Jay Wallwork just three seconds behind.

The women’s field started their swim while all this was unfolding and they had the same rock and roll ride to contend with while endeavouring to hold as straight a line as possible between the marks.  Rebecca Clarke was having her first start of the summer and was happy to continue the theme and be first out of the water.  Rebecca recorded 13 minutes and 4 seconds for the kilometre with Sophie Corbidge lurking just 3 seconds behind and then another dozen seconds back to Nicole Van Der Kaay and Elise Salt.

When the swim is one whole kilometre in length and the run only three it is typically an event that is won in the water.  Leading out is not essential but an athlete does need to be close to the lead at the start of the run leg as the road can soon run out before any sizeable deficits are able to be made up.  This 3 kilometre course follows the scenic waterfront to the end of Kohimarama before racing back to Mission Bay and the finish.  That wind that messed up the swim was also making itself felt with a headwind for the first half of the run and then a tailwind on the return.

At the first race of the season Sam Ward got everyone to sit up and take notice when he won his first ever Stroke & Stride.  He followed that up with a fine second placing at Race #2 and now at Race #4 he backs up his rock solid swim with the fastest run of the day giving him his second victory and cementing his credentials as one of the fastest swimrun athletes racing.  Brent Foster couldn’t hold on for the win but he certainly was good enough to hold his run together and take that valuable second place.  The final place on the podium goes to Jay Wallwork having his best ever finish at the Stroke & Stride.  Then we had another first with the Franklin brothers, Sam and Matt taking out the next two placings.

It may well be a new year but some things remain exactly the same and that includes Sophie Corbidge winning Stroke & Stride races.  She won the first three with what looked like relative ease and here again no one can match her impeccable swimrun combination and Sophie goes four from four.  Nicole Van Der Kaay scored a superb second place at Race #1 and she repeats that placing here making her a serious contender.  Third place goes to Rebecca Clarke proving she is back and close to her best holding out Elise Salt with then Natasha Bowyer in fifth.

And just like that we’re halfway through the series and anyone eyeing the Stroke & Stride Championship must now have staked their claim and be sitting on a sizeable pile of Grand Prix points.  No one is doing that better than Sophie Corbidge with the maximum possible 80 points banked and only Nicole Van Der Kaay and Elise Salt within cooee.  Like he has done numerous times before Brent Foster leads the men however his accumulation of points comes without a win to date so he’ll need to be wary of those two speedsters; Sam Ward and Ryan Sissons at future events.

The next event is on Thursday, February 7th 2013