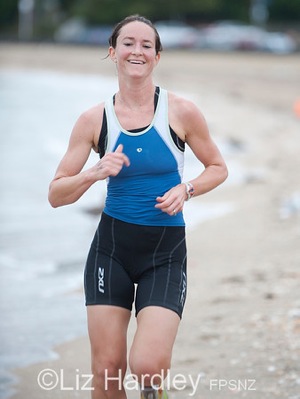 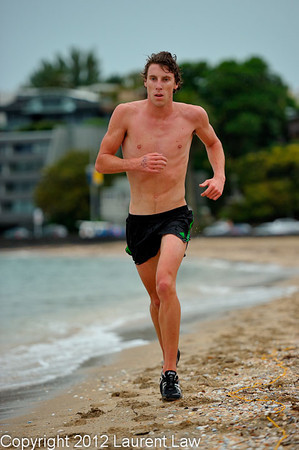 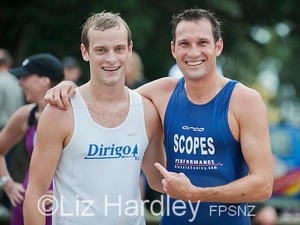 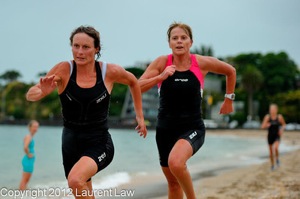 March’s Race #7 is the penultimate event in the Series and our less than average summer weather conditions finally caught up with the 2XU Stroke & Stride. Evening rain was what they had forecast for the beach at Mission Bay and that was exactly what we got for our day at the beach. What wasn’t forecast was that the dreary drizzle keeping us all damp just before the start would also provide the fastest racing conditions of the dubious summer.

Earlier in the afternoon when the sun was shining the waters were chopped up by the cross-shore breeze, once the breeze was swapped for some rain the water surface was ironed out and conditions were custom made for fast swim times. Best of all that drizzle dried up before the race started so there were no problems with visibility. Out on the run there was also no wind to slow anyone down and temperatures were perfect to set us up for a slew of quick 5 kilometre run splits.

The women’s field were off first on their journey out and around the cans for the 750 metre swim and fastest swim of the day goes to Victoria Clark clocking a scorching 10 minutes and 11 seconds. This time entitled her to an 11 second lead over Danielle Parkinson and then another 8 seconds back to Emily Pearce. Jessica Lawson was in the mix recording 10 minutes 49 seconds heading through into the transition area.

We then turned our attention to the men and it was Nick Berry leading the way touching the sand in a time of 9 minutes and 16 seconds good enough for a healthy 20 second lead over the chasers lead in by Jared Bowden. Trailing by 50 seconds was a bunch of half a dozen towed in by Naoki Toyomura and containing the likes of Liam Scopes and Armando Galarraga.

The out and back run course follows the coast line as far as St Heliers Bay and with the twist and turns and cover of the pohutukawa trees it can be difficult to track your opposition. It was a big surprise for Jessica Lawson to reach the turn cone and discover that she had run herself into the lead on the outbound leg. It was a delighted Jessica Lawson consolidating her lead on the way home and crossing the line for her first ever Stroke & Stride victory. Another having a fabulous run was Amelia Watkinson moving up into second at the finish. Emily Pearce backed up an excellent swim with an equally good run leg to lock in that third position ahead of Ashleigh Williams and the flying Rachel Penney.

Domination with a capital D best describes Nick Berry’s race as the closest the rest of the guys got to him all day was when they were standing on the start line. Soon after that he had broken clear going on to lead out of the water and then held that lead over the entire run to come home the winner and his second victory of the season. Running really fast elevated Liam Scopes into the silver medal position while running even faster got Patrick Tarpy up for the bronze backing up his eleven and a half minute swim time. Jared Bowden didn’t let his awesome swim go to waste backing up with an equally flash run split to come home in fourth place and his best ever Stroke & Stride result. Consistent Todd Rowan backed up his 5th place at Race #6 with another 5th place today rounding out the top five men.

The final race in a fortnight will decide the Series Grand Prix and best placed going into this event has to be Nick Berry on 91 points and an apparently unassailable lead over the entire men’s field. In his considerable wake come Cameron Todd, Liam Scopes, Cooper Rand, Brent Foster, Sam Franklin and Jared Bowden as they duel for the remaining podium positions.

Likewise Simone Ackermann appears secure with her 94 point total as she closes in on her amazing 4th title as Stroke & Stride champion. Rebecca Clarke and Maddie Dillon have left it until the final to decide the remaining podium placings unless Elise Salt and Jessica Lawson rain on their parade.