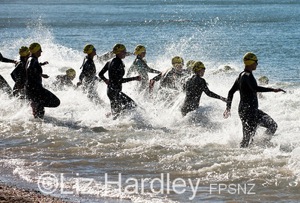 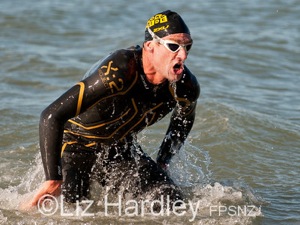 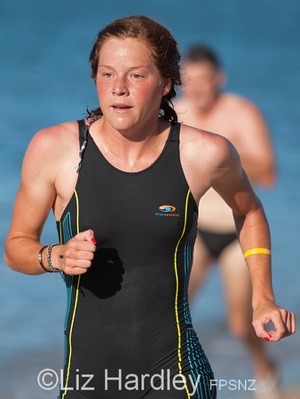 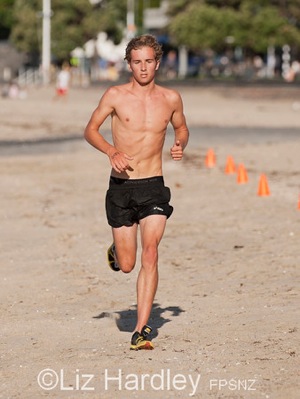 It may have taken until late January but summer finally kicked in for the 2XU Stroke & Stride Series with blue skies and an overdose of sunshine the order of the day. Race #4 in the series is the first event of the new year and 2012 is looking good for a couple of winners from previous years today each scoring their first win of this season.

The distances were a repeat of the December event with the hefty 1000 metre swim followed by the short and sharp 3 kilometre run. Apart from the glorious sunshine we had a moderate breeze blowing from the preferred southerly quadrant allowing for close to idyllic swim conditions if you like your seas calm and Waitemata harbour sparkling.

The men’s field lead off and half way through the big triangular course their was good separation between the race leaders. These gaps only increased as they closed on the final buoy and turned for the final few metres into the beach. Perennial swim leader Brent Foster was the man at the front putting the hurt on and recording 11 minutes 40 seconds for the kilometre swim. Chasing hard twenty seconds in arrears was Cameron Todd. Nick Berry hit the beach in 12 minutes 31 seconds with Sam Ward a further five seconds back. The traffic got a lot busier after that with a steady stream of guys running from the water and up into transition and their running shoes.

The women’s field were now well into their work navigating the same swim course intent on catching as many of the men as possible. But unlike the strung out leading men the leading women seemed content to all stay close together through the entire swim. 13 minutes and 18 seconds after they started a tight bunch of six hit the shore in unison, we’d call Simone Ackermann as first at this point but there was really only a couple of seconds in it.

When the out and back run measures just 3 kilometres there is not a lot of road to make a move on your competition. However that same distance can feel more than long enough if you happen to be defending a lead. Cameron Todd had Brent Foster in sight as they headed out of transition and managed to bridge the gap by the turn at Kohimarama. He then had the mile back to the finish to cement himself in the lead. He did this in style gaining more time all the way to the line for his first Stroke & Stride victory of the season. Brent Foster didn’t just have Cameron Todd to worry about on the return as there was also the flying Nick Berry closing fast in the final few hundred metres. Nick Berry made the pass just before the beach to record a fine second placing. Third place went to a gallant Brent Foster. Repeating his 4th placing from Race #3 was the consistent Sam Ward while Liam Scopes backed up his 13 minute swim with a top five finish.

There are not too many athletes with the experience Simone Ackermann brings to the Stroke & Stride. Having raced just about every race we’ve had over the past eight years helps but even more so is being the three time defending Stroke & Stride champion and the two time defending New Zealand Swimrun Champion. Simone had just her nose in front coming out of the water but once through transition and out on the run course she steadily built on that lead to run home the Stroke & Stride winner again. Surprisingly this was the first win for the 2011/2012 season. Second place today went to Sophie Corbidge, not quite as good as her win at Race #1 but still a very strong showing from this seriously quick athlete. Repeating her third placing from Race #1 gives Maddie Dillon her best start to the season ever. Rebecca Clarke banks for valuable points coming home in 4th place while a photo finish gave first time Stroke & Stride competitor Nicole van der Kaay the closest of decisions over Elise Salt to round out the top five.

Half way through the Series we’d expect the leaders in the Grand Prix to be moving ahead. Not this season as the top of the points tables for both sexes resembles more a logjam. Rebecca Clarke is leading but only by 4 points and when that is Simone Ackermann hunting for her 4th series title the margin looks even smaller. Chasing them is Elise Salt with Maddie Dillon hot on her tail just three points adrift.

If anything the men’s Grand Prix points is even tighter. Current leader Sam Franklin has a whole single point advantage over Cameron Todd and Nick Berry. And that same one point is also all the separates Cooper Rand from Liam Scopes, Liam Scopes from Sam Ward, Sam Ward from Brent Foster and Brent Foster from Michael Poole. The next four events of this season are going to be very interesting.