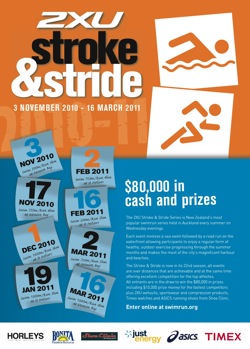 The race distances at these events are much like the tides, forever changing. By the time we get to race #6 in the 2XU Stroke & Stride Series the swim distance is at its lowest while the run distance is as high as it gets.

Some would say a 500 metre swim is hardly worth getting wet for and while it may true that you can’t win the race in the swim you can certainly lose it if you allow your competition to get away and end up spending the rest of the event playing catch up.

It was overcast skies and a light easterly greeting athletes as they lined up for their little swim at St Heliers Bay. And it was a rare treat and a luxury for the swim to be held right on high tide and this resulted in no currents to drag or push the swimmers off their chosen course.

The men’s field lead the way and leading those men in was current series leader Sam Franklin recording a scorching 6 minutes 1 second. Ten seconds later Elliott Frizelle was hitting the beach and twenty seconds after him it was like a commuter’s rush hour as a continuous stream of athletes ran from the water, up the beach and into their change area is search of their shoes. Likely contenders included Sam Morreau, Sam Ward and Liam Scopes just seconds apart at this point.

The women’s field followed the same formula making short work of the already short swim with Rebecca Clarke leading out in 6 minutes 23 seconds and with defending series champion Simone Ackermann right on her toes. This dynamic duo earned themselves a half minute advantage over the train of female athletes that chased them into the station with Elise Salt and Carmel Hanly prominent.

Our big 5 kilometre run involves a long leg out to the turn at Mission Bay then returning to St Heliers and heading for a second turn cone at the far end of the beach and only then finally homeward bound to the finish line. In theory there was a tailwind to be enjoyed on the outward journey however this wasn’t as noticeable as hoped while the pesky headwind on the return got right up the nose of some runners.

Michael Poole was trailing our leading guys out of the water but a masterly transition soon had him level pegging with the leaders and then his renowned leg speed did the work allowing him to build a small lead. It wasn’t clear to the watching crowd back at St Heliers if Sam Franklin and Elliott Frizelle were running to catch Michael Poole or just to get in front of each as they flashed pat transition. Whatever it was working as in the last kilometre they closed down the deficit so that it was very close on the line. Michael Poole holds on to just win his first race of the year and crucially his fourth of the season. Just two seconds separated Sam Franklin and Elliott Frizelle as they filled the podium while Sam Morreau ran well enough to hold out Liam Scopes this time.

There’s a rare class of swimrun athletes where the vagaries of distance doesn’t seem to matter. Multiple times series champ Simone Ackermann is one such athlete, no matter the mix of distances she is always very near the front of the field and to date this season she is proving unbeatable at the finish line. Her fourth victory of the summer comes on the back of one of the fastest swims of the day immediately followed by a flying 5 kilometre run split. The only runner getting remotely close was our other multiple time series champ Carmel Hanly who ran home in second at her first start for this season. Third place this time goes to Alana Lythe turning the tables on her nemesis Elise Salt and the fast finishing Lizzie Orchard.

The favourites are now starting to sort themselves out in the Series Grand Prix. The bookies have Michael Poole and Simone Ackermann as the man and woman to beat. They have each scored themselves four wins and Grand Prix leads as they dive headlong into the business end of the summer.

Michael Poole’s only challenges can come from Sam Franklin and Elliott Frizelle so we’ll watch to see if they can duel themselves into contention over the final rounds.

Elise Salt is presently just a couple of points behind Simone Ackermann and they have Alana Lythe, Rebecca Clarke and Lizzie Orchard hovering in close proximity on their point’s table.