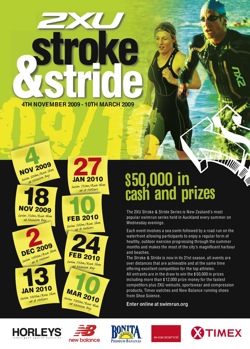 The first thing to know about this Christmas edition of the 2XU Stroke & Stride Series is that Brent Foster will win the thing. Ok that may not be one hundred percent guaranteed however when you consider that Fozzie won this event in 1992 and has won this race every year since then he must be odds on to win it again in 2009.

Officially the summer started the preceding day but we were still in spring-cleaning mode getting a thorough rinsing from the drizzle/showers/rain that fell on us most of the day. Totally absent was the wind leaving the sea completely smooth and not the ruffled conditions that we are accustomed to on these Stroke & Stride afternoons.

The one kilometre swim leg was over a large triangle and soon after rounding the first can three of the woman’s field had moved clear of their pursuers. Hitting the beach in shade over 13 and a half minutes was Samantha Warriner with Simone Ackermann and Rebecca Clarke securely latched on her toes. Samantha Warriner has a long and illustrious record at the Stroke & Stride events going back many, many seasons but this was the first time she has ever lead out the swim; probably not the best news for her competition. More chasers followed our top trio up the beach and into transition including Carmel Hanly 45 seconds in arrears.

The men’s field also enjoyed swimming in the big millpond that was the Waitemata Harbour for this event and it was of course Brent Foster putting the hammer down at the head of the field. An uneventful 11 minutes 52 seconds after the gun Brent Foster was back on the beach and heading for his running shoes. Closest at this stage with a very handy swim was Lee Greer having his first start for the season and just 11 seconds behind. Then we waited another 40 seconds before Sam Franklin led in all the rest of the guys and they could hit the run course in hot pursuit.

Today’s run was always going to be a quick one. It was only 3 kilometres, there’s no hills, there’s no wind and it is neither too hot nor too cold so no reason to be tardy out on the footpath. Samantha Warriner had no one to chase but that wasn’t about to slow her down as she put her head down and matched her slick swim with the day’s fastest run and ultimately victory for the final event of 2009; her year nicely bookended after her victory back in the first race of 2009. Two weeks ago Simone Ackermann and Carmel Hanly chased Samantha Warriner home and nothing changed this time with our podium an exact replica. Rebecca Clarke backed up her customary fine swim with a classy run split to place 4th and record her best ever finish. Georgia Lloyd put together a strong all-round performance and also had her best Stroke & Stride result in 5th place.

As we said at the start Brent Foster won this race, not exactly startling news when it has been happening for 18 years now. He followed the same recipe that has worked so well putting together a punishing swim with an unmatchable run to stay away from all those who would consider him beatable. Closest at the end of the run leg was Liam Scopes on the back of another of his fleet-footed run splits. Lee Greer didn’t just swim outstandingly as he ran through to claim third which is his best ever Stroke & Stride result ahead of international visitor Steve Worthington and best placed junior Sam Morreau.

Heading into the big six week break over the New Year our Grand Prix is interestingly poised. The female points are lead by current series champion Simone Ackermann just a point in front of past champ Carmel Hanly and with another past champ Samantha Warriner currently holding third. The perennial Brent Foster is once again leading the way on the men’s side five points clear of Liam Scopes with current men’s Champion Ryan Sissons still dangerous holding onto third position.