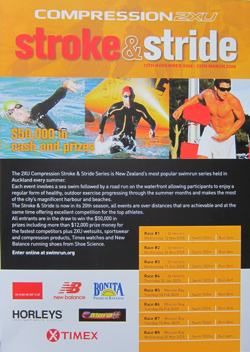 A lot of metres can be swum and run and a whole lot of racing can happen in 20 years and here’s the proof, the third event in this season’s 2XU Compression Stroke & Stride Series is the 150th Stroke & Stride of all time.

We always expect a breeze of some sort to ruffle the flags in these afternoon events however by our third race we at least had it now blowing in an offshore direction.  So while 1000 metres is the longest swim we have it wasn’t chopped up like it can be when it is an onshore allowing the big field pristine conditions out around the cans.  The women’s field were first to start and they were quickly into their work circumnavigating the big rectangular course.  It didn’t look like they were taking the straightest of lines at times and when they did find their way back to the shore it was once again Teresa Adam first to touch the sand recording 14 minutes 8 seconds.  Very close behind, 7 seconds in fact, was Simone Ackermann and then another twenty seconds later saw Carmel Hanly and Rebecca Clark emerge from the water.

Over in the men’s draw it was Brent Foster the only swimmer going inside 12 minutes with his time of 11 minutes and 58 seconds.  Tony Dodds won two races last summer and was well placed to record another top finish when he held second place at the end of the swim 20 seconds off the lead.  There was a big chasing bunch a further 10 seconds down and that contained nearly all the expected contenders for a top ten finish.

Simone Ackermann and Teresa Adam went first and second at Race #1 and then repeated those placings at Race #2.  This mix of distances might have been expected to favour Teresa but when Simone was so close after the swim that was not how it worked out.  Three kilometres of running later saw Simone Ackermann recording her third victory from her three starts giving her a perfect record for the early season.  Defending Series Champion Carmel Hanly is going to make anyone work hard to take a victory at these races and the fastest run of the day got her up into second place denying Teresa Adam the runner spot for this one.  Megan Blackett misses the podium but scores for consistency repeating her fourth place from the second race getting home ahead of Rebecca Clarke.

Okay guys, you’ve got Brent Foster leading you out onto the run with a 20 or 30 or more seconds lead.  He has won this pre Christmas edition of the Stroke & Stride every year since 1992 so you know he’s been around for a while.  You’ve got 3000 metres of road to catch him and deny him the win in 2008 – can you do it?  Not likely – Fozzie has ruled Stroke & Stride for decades and this is his signature event so it was again a resounding victory for the best swimrun athlete on the planet.  A fortnight earlier Ryan Sissons started his season with a tremendous first place finish, today he backs up that result with an impressive second.  Ben Pattle’s best result ever got him the third podium position holding out William Curtayne and James Upton.

Seems like we’ve only just got started with the season, only three races done but we now head into our six week mid-season break for the Christmas holidays.  It is important to have some points on the board for the Grand Prix at this stage but of more importance is the form that an athlete brings with them for the second half of the season in late January.  Simone Ackermann has had a dream start and is deservedly 11 points clear of Teresa Adam.  Sarah Jack, Maddie Dillon and Carmel Hanly are also strongly in contention for the title 15 points in arrears.

Serial points collector James Upton hasn’t won a race so far this season but has still reaped sufficient points to lead the three athletes that have each won an event.  Ryan Sissons, Brent Foster and Liam Scopes will need to match this consistency if they want to overhaul the current leader.  James will likely need to score a win of his own to hold them off when battle resumes in 2009.