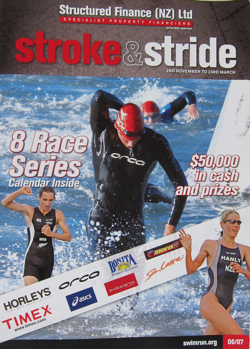 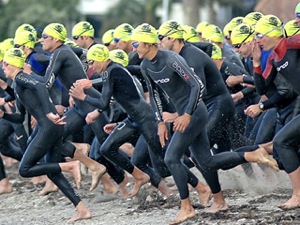 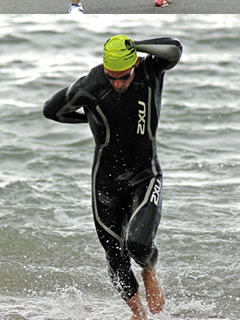 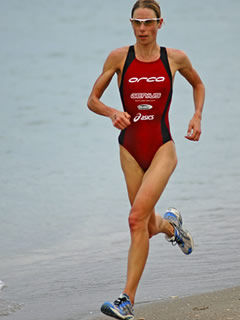 The season finale blew into town on the back of an autumnal storm that had battered most of New Zealand into submission just 24 hours earlier.  Fortunately for the Structured Finance sponsored Stroke & Stride Series the showers stayed away while the race was in progress and the pugilistic wind was now throwing all its gusts out of the southwest corner.  This direction allows the line of white caps marching down the harbour to keep on marching past the beach giving us enough space to keep the swim course user friendly.  In fact the second leg of the big 1000 metre triangle was close to being down hill with waves and wind all lending a helping hand.

The men’s field were the first to get underway and immediately two swimmers started to pull clear of the field.  It was Dylan McNeice and Brent Foster charging hard up the front and at swim’s end they ran side by side up the beach in a smoking 11 minutes 25 seconds, good enough for a healthy three quarters of a minute lead over the chasing posse.  There was still nothing in it as Dylan and Brent headed off into the wind to the first turn cone at Kohimarama with neither giving an inch in the early stages of the 4 kilometre run.  Chasing them out onto the footpath and looking to run down the leading duo came Ben Visser, James Upton, Lee Greer, Sam Walker, James Elvery and Liam Scopes.

Nathalie Bernard again showed the women’s field the fastest way around the cans emerging from the water in a time of 12 minutes 35 seconds.  The closest to her was Gina Ferguson and Jenny Cooper and they were followed in by a huge bunch teeming with contenders including Kirsty Wannan, Carmel Hanly, Jacqui Seebold, Simone Ackermann, Marisa Carter and the wildcard for today’s event, the celebrated Japanese athlete Akiko Sekine.

The next time we saw the men was with a kilometre remaining and now it was Brent Foster running with the wind at his back and only his shadow for company.  Even with this lead he had no intention of taking his foot off the throttle and minutes later he ran up the beach to the finish line to claim his fifth victory for the summer, the New Zealand Swimrun Championship for the eighth time and a strangle hold on the Stroke & Stride Series Championship.  A half minute later it was James Elvery who had run clear of all the other men and he nabbed the second placing seconds clear of James Upton and Dylan McNeice.  Sam Walker held his own out on the run to claim fifth place.

Some athletes thrive on a high workload and you would be hard pressed to find an athlete as busy as Gina Ferguson over the summer months.  Her swim is always sublime and now she’s unleashing a more than handy run to back that up.  This combination is always going to be hard to beat and on this occasion proved unassailable as she finished the season with her third victory of the summer and attained the title of New Zealand Swimrun Champion in the process.  The determined run of Akiko Sekine enabled her to record a tremendous second place in her debut Stroke & Stride ahead of the experienced Carmel Hanly.  Fourth place ended up going to Jacqui Seebold after overtaking swim leader Nathalie Bernard in the later stages of the run.

It was not only the New Zealand Championship at stake, the final race in the Series was also crucial in deciding who would take maximum points in the Series Grand Prix and the title of Stroke & Stride Champion for 2007.  Reigning Series Champion Carmel Hanly (1st, 1st, 2nd, 1st, 1st & 3rd) launched the defence of her title with commanding performances in the early rounds and was then never headed as she claimed her second Stroke & Stride Series Championship.  However Carmel’s win over the women’s field was only secured after one of the hardest fought battles seen in years with ultimately just three points in it.  Providing all the competition and fireworks this season was Gina Ferguson (2nd, 1st, 1st, 2nd, 3rd & 1st) with a fantastic second place ahead of the renowned runner Anna Hamilton (3rd, 4th, 3rd, 3rd, 2nd & 7th) and the renowned swimmer Nathalie Bernard (5th, 3rd, 2nd, 5th, 5th & 5th).  Also providing plenty of excitement through the summer and now finishing in the money were Jacqui Seebold (4th, 5th, 5th & 4th) Simone Ackermann (13th, 6th, 7th, 8th, 3rd & 8th) Jenny Cooper (3rd, 8th, 7th, 6th & 6th) and Kirsty Wannan (7th, 7th, 4th, 10th, 8th & 9th).