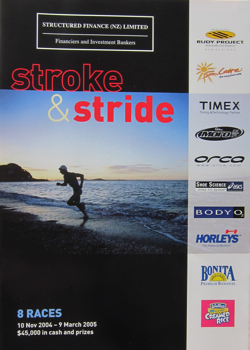 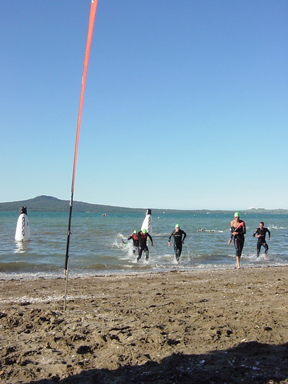 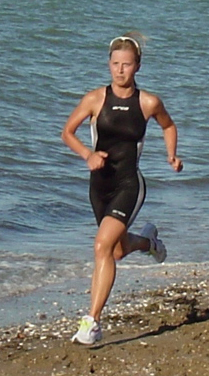 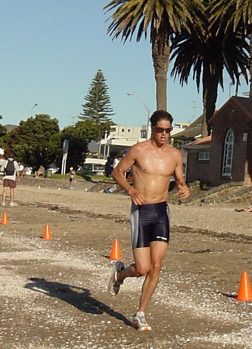 The first event of the new year served up a result that while not unexpected seemed to be an awful long time coming around.  Way back in the summer of 1996/97 a schoolgirl set the SWIMRUN scene on fire with a string of performances that saw her win the overall Stroke & Stride Series Championship at a very tender age.  The sensational Debbie Tanner then went on to be one of the most consistent of athletes competing race after race, season after season always finishing amongst the top place getters however not rising again to the very highest honours, in fact her last Stroke & Stride win came exactly six years ago.  At Race #4 at the end of last year she looked to be back to near her best running a close second place to Olympian Samantha Warriner and with a New Year’s resolution to go one better in 2005 she could take a lot of stopping before this season is done.  The slightly choppy 1000 metre swim worked to her advantage as she extracted herself from the main field and led around the buoys with just one swimmer for company.  Running up the beach into transition she recorded a time just a tick over 14 minutes and a one second lead over newcomer Nicky Samuels.  Debbie Tanner’s wealth of experience now came to the fore as a lightening transmute from wetsuited swimmer to shoed runner saw her gain a crucial handful of seconds over Nicky Samuels.  Then came the short, sharp three kilometre sprint down Tamaki Drive as far as Kohimarama before the return to St Heliers Bay and the finish line.  Those years of practice and expertise paid off for Debbie Tanner as she held her lead to cross the line in first place just 4 seconds ahead of Nicky Samuels who displayed one of the most excellent debut performances we’ve witnessed in many years.  Defending Series Champion Nicole Cope unleashed her trademark blistering leg speed out on the run course to move through for third place 10 seconds ahead of Carmel Hanly and with Brooke Dobbs snaring fifth place.

While all this action was unfolding in the women’s event it was business as usual for the men in the fourth round of the Structured Finance sponsored Stroke & Stride Series.  If there was sports betting at the Stroke & Stride then a race with an onshore wind chopping up a one kilometre swim followed by a little three kilometre run would not see any return on your dollar whatsoever if you backed the overwhelming favourite, Brent Foster.  Our perennial Series Champion just seems to be impossible to beat when the greater proportion of the event is contained in the swim leg.  Not for the first time this summer or for that matter this last decade he eased away from the pack on his way out to the first buoy, then extended this lead to three quarters of a minute over Jared Jackson by swim’s end with a further 15 seconds back to the boisterous chasing pack.  Fozzie recorded 12min 02sec for the swim and in the blink of an eye he was through transition and blasting his way out along the waterfront without another male in sight.  Less than 10 minutes later he’s back from his 3 kilometre jaunt and crossing the finish line for his third victory of this season.  The battle for second place was a lot closer fought with a sizeable bunch all exiting the water seconds apart and once more it was Clark Ellice who had retained his golden form over the mid-season break and again had the leg speed to dispatch any challengers as he ran through in second place.  Sam Walker was having his best race of the season holding on to a fine third placing heading home Will Green and Ben Pattle.

The further this season goes on the closer the battle for Grand Prix points seems to get.  Half way into the eight race Series, Nicole Cope’s defence of her title appears on track with this third place finish elevating her into the lead although with just a 2 point buffer over Samantha Warriner.  Debbie Tanner’s win lifts her into third place while currently Kirsty Whiting and Carmel Hanly round out the top five.  If Clark Ellice can keep on stringing together firsts and seconds as he’s done to date this season he could prove very tough to beat as he currently sits atop the men’s field with 71 points.  Of course he’ll need to keep at bay the ominous Brent Foster who now trails him by 11 points.  And then we can’t count out the talented James Elvery, Liam Scopes, Tom Hahn, Sam Walker and William Curtayne who are all within striking distance of the Championship.