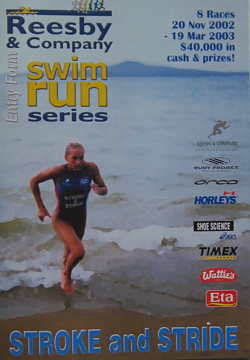 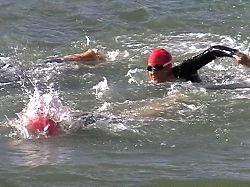 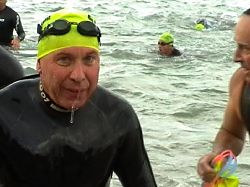 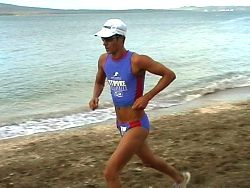 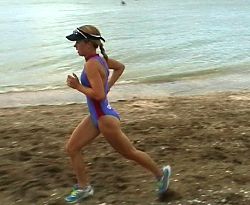 The conditions for Race #2 in the Reesby & Company Stroke & Stride Series were sublime with balmy temperatures, plenty of sunshine, hardly a breath of wind and hardly a ripple on the water. After our rugged season opener two weeks previous, a more contrasting day would be hard to imagine. Summer has arrived in Auckland and the Stroke & Stride competitors flocked to the waterfront for a taste of the swimrun action.  The Pro Division race every second event in the Series sans wetsuits and this proved to be no ordeal at all as the men lined up on the beach awaiting the start in these picture perfect conditions. The swim consisted of a 350 metre outward leg, 50 metres across the back and then 350 metres back into the beach. At the half waypoint it was apparent to those watching from the beach that one swimmer had already opened up a sizable gap, which he extended further returning to the shore. No real surprise that it was once again Brent Foster that had shown a clean pair of heels to the chasing bunch. Will Green has been absent from the Series for a couple of seasons but he has quickly recaptured his form and he lead in the chasers with then Carl Cairns, James Elvery, Reto Waeffler and Malcolm McGregor making up the rest of the strung out posse.

The Pro Women started two minutes after the men so were able to observe the vagaries of the Waitemata Harbour tide and currents and adjust their navigation accordingly. Rebecca Linton having her first start of the season had an epic swim to lead from the water with even the renowned Rebecca Nesbit in arrears and then it was nearly a full minute back to a group of three made up of Samantha Warriner, Debbie Tanner and newcomer Taryn McLeod. Following this trio in was Anna Elvery, Marisa Carter, Sonia Bracegirdle and the winner from Race #1, Nicole Cope who was now almost two minutes in arrears of first place.  When Brent Foster adds the fastest run split of the day to his stellar swim it equals a parlous time for his competition as he does something that he’s been doing with regularity for the past ten years and wins yet another Stroke & Stride. The guy that has stepped up to the plate and is challenging strongly this season is James Elvery who claims his second second placing in succession as he attempts to bridge the gap to Fozzie. This season’s foreign charge looks to be coming from Switzerland as Reto Waeffler blows off the cobwebs of the northern hemisphere winter with a fine third place in his Stroke & Stride debut. Next home was Carl Cairns just holding off the hard charging Josh Dyer.

At the business end of last season it was Whangarei based, Samantha Warriner dominating with three wins from three starts. This season her ominous form continues as she quickly runs down the couple of competitors in front of her after the swim and then goes on to record yet another victory. Nicole Cope wasn’t giving up without a fight and recorded fastest run split over the 4 kilometres, which pulled her up through the field into second place 25 seconds ahead of Debbie Tanner. In fourth was Taryn McLeod who hails from far-flung Dunedin and probably deserves points just for the commute she faces getting to and from the Series. Rebecca Linton proved that she can run as well as swim and rounded out the top five.  Brent Foster sits atop of the Series Grand Prix with his two wins while James Elvery is easily the best of the rest at this early stage. Nicole Cope has a seven point lead over Debbie Tanner who in turn is seven points clear of Fiona Docherty but it’s early days yet and there’s still plenty more action to be served up over the next three months.