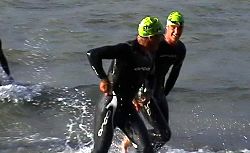 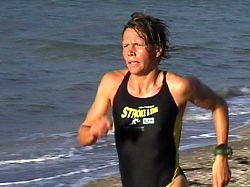 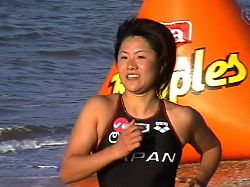 After more than a dozen years and swiftly approaching one hundred events, Race #7 in the Reesby & Company Stroke & Stride Series surprises yet again. For the first time in memory the field contained not one Series Champion from a previous season. Would this leave the door open for a surprise winner on the day?

The women’s field were started first and what looked like a tough 750 metre swim from the beach proved to be just that as the onshore wind and steep chop pushed a number of competitors west of the rhumb line as they headed for the first buoy. Of course while others struggle, Rebecca Nesbit appears impervious to these conditions and had opened up a sizable gap at the half waypoint that she extended to over a minute by the time she was back on the beach. Current Series leader, Kirsty Whiting was the next to transition followed 20 seconds later by Vanessa Palmer and Samantha Warriner. Nicole Cope was also handily placed and then followed Abigail Wroe and Laurie Pugh.

Competitors then had to contend with the big 5 kilometre run which was also buffeted by the stiff breeze as the course wound its way out to Mission Bay and return. The previous six races this season had each produced a different winner in the woman’s field. Winner of Race #6, Samantha Warriner must have enjoyed the sweet taste of victory as she decided to return for seconds by backing up her strong swim with a scorching run which took her into the lead and onto her second win in a row. Nicole Cope did her best to play catch up but couldn’t match Samantha Warriner’s run and finished in second while Kirsty Whiting scored a very valuable third place. Close behind it was Laurie Pugh who made ground during the run to overtake Vanessa Palmer for fourth place.

The men’s field were also forced to endure a first-class swimmer escaping from the chasing pack. This time it was Craig Stewart who found the conditions to his liking and was nearly 20 seconds clear as he ran up the beach and into transition but chasing hard was Bevan Docherty, Szabolcs A’Goston, Csaba Kuttor and Dean Foster. Just off the back of these guys was Oliver Tompkins and a further half minute behind was a large bunch containing the likes of James Elvery, Terenzo Bozzone, Scott Larsen, Michael Pugh and Carl Cairns.

Craig Stewart’s lead was short lived once out on the run as Szabolcs A’Goston and Bevan Docherty surged to the front of the field and then spent the remainder of the 5 kilometre run locked in an arm wrestle each trying to gain the upper hand. When they ran down the beach for the final hundred metres to the finish it was Bevan Docherty with a small lead which he defended to the line to record his first ever victory in a Stroke & Stride event. Szabolcs A’Goston was only a matter of seconds behind but then there was a gap of nearly a minute back to Csaba Kuttor in third. Next in Terenzo Bozzone and Michael Pugh were locked in a tremendous sprint up the beach with Terenzo getting the nod to claim fourth place.

So at the end of the day, the ninety-ninth Stroke & Stride of all time didn’t produce any real surprises as Samantha Warriner claimed her second win from as many starts and Bevan Docherty, who had been picked to win a race all summer long, finally did so. With the crucial one race remaining the Series Grand Prix is finely poised to reveal the best athletes of the season. Brent Foster and Kirsty Whiting both currently lead but still require one more inspired performance to secure the Series Championship. Trailing these leaders; Debbie Tanner and Nicole Cope are separated by just two points, as are Bevan Docherty and Szabolcs A’Goston so there is a huge amount riding on results in the final event. The Series Grand Prix Prize Money is divided between the top athletes down to 8th place.