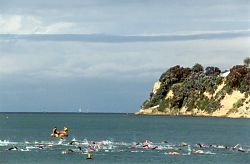 The swim course at Race #6 in the Reesby & Company Stroke & Stride Series is only 500 metres which results in very little separation between the top athletes and makes it very much a foot race over the 5 kilometre run that follows. But so often the race can be lost for competitors when those few seconds deficit at swim’s end returns to haunt them at the end of the run leg in the mad dash up the beach to the race finish line. For this event the Pro Division raced without the assistance of their wetsuits and the men’s field were started one minute ahead of the women.

Super swimmer, Craig Stewart was the first back on the beach in a time of 6 minutes 10 seconds with just four seconds back to Stephen Peterson and then it was Oliver Tompkins leading in an almost continuous stream of athletes including Hamish Carter, Szabolcs Agoston and Csaba Kuttor. Bevan Docherty wasn’t too far off the pace and he was quick to make his move on the run to join Hamish Carter at the head of the field. With a kilometre to go Docherty held the smallest of leads as he and Carter matched stride for stride as they tore back along the waterfront towards the finish. In the last few hundred metres it was Carter who upped the ante yet again and went into the lead to take the victory by the smallest of margins. Winner of the previous event Szabolcs A’Goston, couldn’t match the speed of these two during the run but took a comfortable third place and some more of those valuable Grand Prix points ahead of his countryman, Csaba Kuttor. Rounding out the top five was the world junior champion, Terenzo Bozzone.

A 500 metre swim is not even close to being long enough for Rebecca Nesbit to really get her teeth into, but it is still long enough for her to wring a 20 second lead out of those attempting to stay close to her in the swim. In second place was the New Zealand surf life saving champion Leigh Webster, who had in turn opened up a 15 second lead back to those experienced Stroke & Stride campaigners, Debbie Tanner and Kirsty Whiting. New girl on the block, Samantha Warriner was handily placed in sixth while our winner of a fortnight ago, Nicole Cope held tenth position. Samantha Warriner perhaps lacks in experience in these events but she didn’t hang around to ask for advice as she backed up her excellent swim with one of the fastest runs of the day to capture a remarkable win at her first attempt. Nicole Cope did record the fastest run but it wasn’t enough this time and she finished in second ahead of the inseparable duo of Kirsty Whiting and Debbie Tanner. Laurie Pugh from Germany celebrated her elevation to the Pro Division with a fine fifth placing.

With three quarters of the eight events now run it is the decisive time of the season and while some are making a late charge in the Series Grand Prix, the competitor’s uppermost in the point’s table are now looking to consolidate their positions. The woman’s field has never had a season like this one with six different winners from the six races to date. Standing at the head of the field is the winner from Race #4 Kirsty Whiting, who has built herself a more than handy seven point lead over the rest of the field with her ability to never finish outside the first three. Chasing her and locked in a battle of their own are Debbie Tanner and Vanessa Palmer and then only three points separates Nicole Cope, Julia Scopes and Leigh Webster. The only prediction we care to make is that this season’s quest for the Series title is going right down to the wire.

With current Series leader Brent Foster choosing to put his feet up and enjoy just watching the action at this race it has opened the door for the rest of the men’s field to take a share of the points on offer. Foster’s lead is not unassailable but it is still sizable and perhaps the battle will come from Bevan Docherty and Szabolcs A’Goston who are now separated by a solitary point. Scott Larsen, Clark Ellice and Terenzo Bozzone will each be doing their sums and looking for any advantage they can get in the final two events. Prize money for the Series is paid to the top eight with final points being decided from Race #8 and five other races.