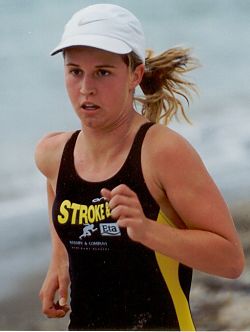 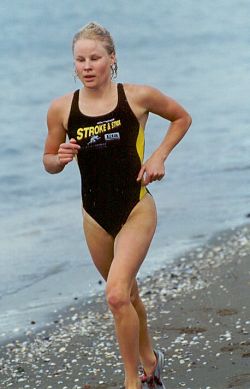 Things are heating up at Race #4 in the Reesby & Company Stroke & Stride and not only because this event is held right in the middle of the New Zealand summer. Sure we had a nice hot day, a balmy sea breeze blowing onshore and even the water temperature is getting bath like but it is the competition in the Pro field that is really starting to sizzle. By the end of this Stroke & Stride we’d see less than sixty seconds separate the first five women across the line and the strong international contingent now making it’s presence felt in the men’s field.

This race is again over the big 1000 metre swim course and would be raced without wetsuits. That balmy breeze mentioned earlier is actually funnelling right down the harbour creating a steep, rather large and messy chop for the competitors to contend with at St Heliers Bay. The run is only 3 kilometres out and back to Kohimarama but shorter does not mean easier. To go from the horizontal to the vertical when you jump out of the water after swimming and then start running is one thing, but to immediately have to start running as fast you possibly can is a terrific way to make the acquaintance of Mr Pain as your legs and lungs scream for attention.

For a decade now the man to beat at Stroke & Stride has been Brent Foster; to do that you’re going to have to stay close during the swim. In these less than ideal conditions Brent has been in a league of his own and once again he opens up a gap early on which he then extends throughout the swim leg. Champion national distance swimmer Craig Stewart also has a great swim and hits the beach in second. Hamish Carter is having his first race of the season and holds third place for the men at swim’s end, just seconds ahead of Hungarian visitor, Szabolc A’goston while Bevan Docherty leads in the second of the Hungarian pair, Csaba Kuttor.

The women’s Pro field started at the same time as the men and were again led out of the water by the super-swimmer, Rebecca Nesbit who had also obviously thrived on these rough water conditions and opened up a whooping 90 second lead. Trailing in her wake were Kirsty Whiting, Leigh Webster and Debbie Tanner who had put good time on the rest of the field.  If winning three races from three starts is a dream start to the season for Brent Foster then we better search for a new adjective to describe yet another victory. This time Hamish Carter had to settle for second while Szabolcs A’goston held out Bevan Docherty for third and Csaba Kuttor rounded out the top five.

Kirsty Whiting took control of the women’s field during the final stages of the run holding out former Series Champion Debbie Tanner. Rebecca Nesbit backs up her sublime swim with a solid run to take third place while Vanessa Palmer and Nicole Cope record the fastest runs of the day and their near identical run splits carry them through to fourth and fifth placings.

At the half way point in the Series, Vanessa Palmer’s fourth place gave her enough points to just hold her position at the top of the points table in the Series Grand Prix while Kirsty Whiting has moved into second now only one point adrift. Debbie Tanner is stalking these leaders and presently holds third. Defending Series Champion Brent Foster once again sits atop of the men’s Grand Prix with Bevan Docherty his closest challenger and a real dogfight going on for third.