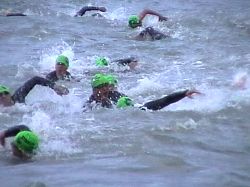 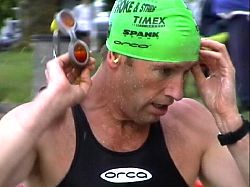 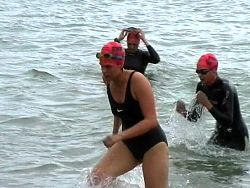 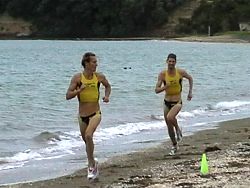 Stroke & Stride events don’t have to be held on windy days but whoever is responsible for the weather in Auckland seems to like a breeze to be blowing on the afternoons that a Stroke & Stride is scheduled. Therefore it was no surprise that Race #2 in the Reesby & Company Stroke & Stride Series again had a stiff onshore wind chopping up St Heliers Bay making the 750 metre swim more challenging than it need be. Not to mention making the return leg of the out and back 4 kilometre run also hard going with the persistent headwind to contend with. One more difficulty for the Pro Division to contend with was that for this event they were racing without the indulgence of their wetsuits making the swim leg that much harder and longer.

One person who was smiling before the start was defending Series Champion, Brent Foster. While Brent has specialized in winning Stroke & Stride races for the last decade, for the past 25 years he has also been a superlative swimmer and the rougher and tougher the conditions on the water, the more he likes it. Going head on into the chop out to the first buoy he quickly jumped away from the rest of the men’s field opening up a 15 second lead by the time he turned the buoy which he extended to more than half a minute when he touched the beach. Stephen Peterson and Jeremy Gray were at the head of the chasing pack that contained Clark Ellice, Brent Sheldrake, Scott Larsen, Bevan Docherty, James Elvery, Carl Cairns, Terenzo Bozzone and Dean Foster.

The Pro Women’s field were started two minutes after the men and the two Rebecca’s; Linton and Nesbit again showed just how quick they are in the water by catching a number of the men and opening up a minute lead on the rest of the women. Trailing this duo was the Surf Life Saving star, Leigh Webster followed by Kirsty Whiting, Debbie Tanner, Evelyn Williamson, Vanessa Palmer and Anna Cleaver. Out on the run to Mission Bay there were some seriously quick runners determined to take bites out of Brent Foster’s lead but on this occasion no one could get close as Brent scored yet another Stroke & Stride victory. It was Bevan Docherty who pulled out the fastest run split on the day to move through for second and Terenzo Bozzone was also fleet of foot as he scored a valuable third place. Clark Ellice couldn’t repeat his second place from a fortnight earlier but showed good form to hold on to fourth ahead of Brent Sheldrake.

When Rebecca Linton and Rebecca Nesbitt ran out of the transition area their competition was still in the water but 4 kilometres must have seemed a long way for these two especially when considering the caliber of those that would soon be donning their shoes and attempting to run them down. And so it proved, as with 500 metres to the finish the first three places were now being fought over by defending Series Champion and current New Zealand Swimrun Champ Evelyn Williamson, past Swimrun Champion Kirsty Whiting and past Series Champion Debbie Tanner. Continuing her great form from last season it was Evelyn Williamson who had the kick to open up a gap over her younger challengers and use all her experience to come home for the victory just seconds ahead of Kirsty Whiting and then Debbie Tanner. Anna Cleaver opened her season with an excellent fourth just heading home Leigh Webster.

It is early days in the Series Grand Prix but at this point it is Miss Consistency, Vanessa Palmer with a one point lead over Julia Scopes with Carmel Hanly a further three points in arrears. With two wins from two starts Brent Foster is yet again making the early running for the Men’s field with Clark Ellice and Terenzo Bozzone the closest.