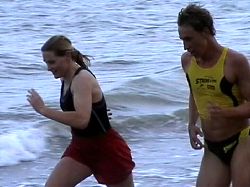 Spring is the season of change and there was change aplenty in the first event of this season’s Reesby & Company Stroke & Stride Series. First up, tradition holds that the weather be inclement for Race #1 but this time precarious and extreme would be more apt adjectives in describing conditions facing the hundreds of hardy competitors that turned out for the season opener. While the race organizers puzzled over how they were ever going to set a swim course in the gale force onshore winds; the competitors had time to ponder whether it was going to be the swim or run leg that would provide the greatest challenge.

Another change saw the absence of many seasoned competitors from previous seasons. Competitors whose names had become synonymous with Stroke & Stride, as they had regularly filled the top spots over the years. For a variety of reasons a large number of these weren’t on the start line for the new season.

The women were the first to get a taste of the rock’n’roll ride that was the 500 metre swim with Rebecca Nesbit thriving in these conditions and recording a time of just over six minutes giving her a handy 15 second lead over Caroline Collard and then Debbie Tanner. Regrettably for these three that was the end of their fun as they didn’t feature in the final results. Back in 11th place out of the water was Julia Scopes and once she had her running shoes on she set about slicing through the arduous headwind and overhauling all those ahead of her on the exposed 5 kilometre run course that followed the harbour shore. With one kilometer to go she had taken the lead which she held to the finish recording her first ever Stroke & Stride win on one of our toughest ever days. Another having her best race ever was Vanessa Palmer coming home in second place ahead of Carmel Hanly, Anna Elvery and Julia Cree.

A lot of things change but one constant over the past nine seasons has been Brent Foster’s hard charging, lead from the front style of racing that has seen him dominate the men’s field year after year. And sorry guys but while some names may be missing Fozzie is back for another summer of Stroke & Stride. With all his years of surf experience to the fore he opened up a staggering 20 second lead over the chasing bunch during the 500 metre swim and then pushed hard during the run to extend his lead to a minute by the finish.

Clark Ellice won a Stroke & Stride a couple of years back and looks to have regained his form as he snatched second place by just seconds from the fast improving James Elvery, another having the race of his life. Liam Scopes clocked the second fastest run to edge out Brent Sheldrake for fourth place.