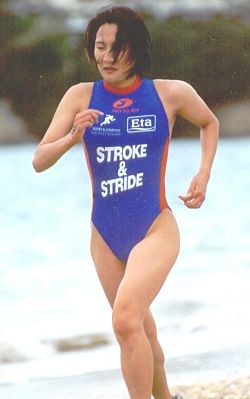 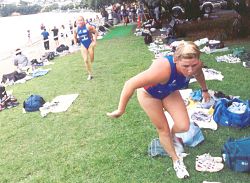 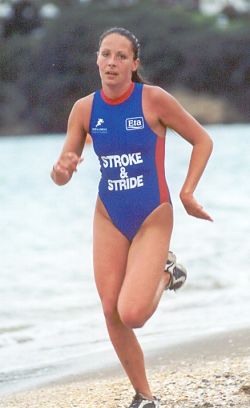 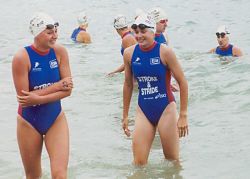 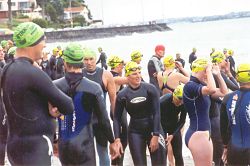 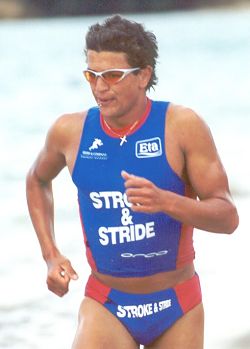 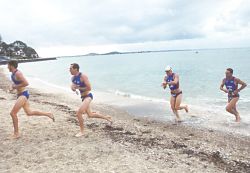 The final event in this season’s Reesby & Company Stroke & Stride Series was held under dark skies with the threat of rain that happily never arrived at the St Heliers Bay venue. The strong north-easterly wind did it’s best to chop up the 1000 metre swim but fortunately the adjacent cliffs gave some shelter to the big triangular swim course. This event was crucial for those wishing to cement their placing in the Series Grand Prix and snare their share of the $20,000 prize money on offer.

The pro field were swimming without the aid of their Orca wetsuits for this event and three men broke away from field early on. At swims end it was young gun Kieran Doe recording 12min 49sec leading the more experienced campaigners Brent Foster and Hamish Carter into the transition. Fifteen seconds back Stephen Peterson was leading Malcolm McGregor and then came Carl Cairns and Terenzo Bozzone. The women’s field started three minutes behind the men and again there was a break at the front of the field. No surprises that it was those accomplished swimmers, Rebecca Nesbit and Hideko Ando leading the way. The surprise was the size of the lead that these two had built when they emerged from the sea with times of 12min 53sec and 13min 02sec respectively. More than a minute in arrears was Debbie Tanner who herself had gained a minute over the chasing bunch. Perhaps this race was already decided with still the run leg to come.

The theory is; that all things being equal, a 4 kilometre run should take a balanced athlete around about the same time as the 1000 metre swim. Of course the majority of athletes lean towards one discipline or the other but with more and more swimrun specialists now competing we’re seeing competitor’s times more closely aligned for the two activities. Hamish Carter and Brent Foster are both at the top of their game and on this occasion it was Hamish who ran away for the win in our final race. Brent may be forgiven for feeling a little weary after his big weekend but he still got up a fine second placing which clinched the overall Series Championship yet again. Kieran Doe was disappointed he couldn’t quite foot it with these two on the run but held third ahead of Terenzo Bozzone and Malcolm McGregor.

Competing at two Olympic Games gives an athlete a pool of experience that is hard to match. Japan’s Hideko Ando used all this experience plus what she had learnt from her third placing in the Stroke & Stride a fortnight earlier to overtake Rebecca Nesbitt during the run and take the victory.

In the mid 1990’s it wasn’t unusual for overseas athletes to record wins in the Series but for the past five or six years the Kiwis have shut out the visitors from the top spot. Hideko’s victory breaks the drought for the internationals and she is also the first ever winner from Japan. Rebecca Nesbitt is no stranger to leading a Stroke & Stride but this time out she was having her best race ever as she backed up her always incomparable swim with a fine run to secure second place. Debbie Tanner couldn’t catch the leading pair but was safe in third ahead of Heidi Alexander, who took out the fastest run split and then Vanessa Palmer.

Evelyn Williamson (2nd, 1st, 1st, 1st, 1st, 1st & 1st) and Brent Foster (2nd, 2nd, 1st, 1st, 2nd, 2nd, 1st & 2nd) were clearly the dominant athletes throughout the summer and deserving winners of the Stroke & Stride Series Championship. Evelyn is the first athlete residing outside of Auckland to win this title, which must be an achievement on its own. Brent has exhausted all our superlatives as he wins the Series for the eighth time. To put some perspective on his achievement, on the way to this year’s title Brent swam 6250 metres, ran 33 kilometres, carried out eight hasty transitions and all this in a time of just 3 hours 8 minutes and 42 seconds.