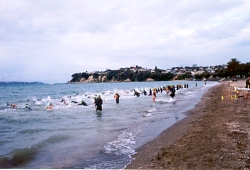 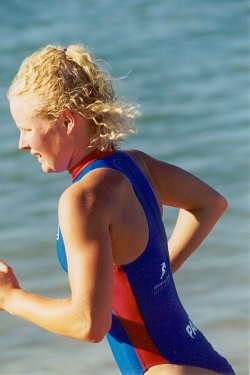 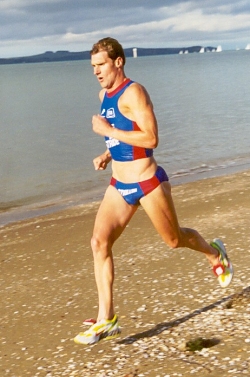 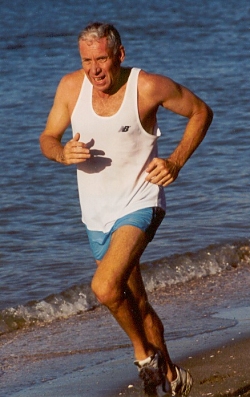 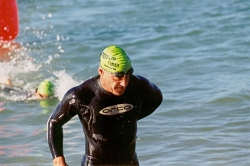 The penultimate event in this season’s Reesby & Company Stroke & Stride Series was a crucial time for those contesting for the points and prize money on offer in the Series Grand Prix. While Series leaders Evelyn Williamson and Brent Foster had already secured the overall titles with their outstanding form in the first six events of the season, they weren’t going to leave the door open to any pretenders for their titles as they lined up on the start line yet again hoping to slam home their advantage.

The weather was a carbon copy of our previous race a fortnight ago with hot, fine conditions and of course the resultant afternoon sea breeze kicking up a nice little chop on the Waitemata Harbour, just to make things interesting on the swim. Our perennial swim favourite Rebecca Nesbitt doesn’t mind what’s happening with the sea conditions and by the time she reached the halfway point of the 750 metre swim she had already cleared away from the rest of the women’s field. Just nine and a half minutes after the start Rebecca was running up the beach towards transition having opened up a 45 second lead. Next to finish was Hideko Ando who has a fine swimming pedigree of her own having represented Japan at the Barcelona and Atlanta Olympics no less. Current New Zealand Swimrun champion Kirsty Whiting had opened up an 18 second lead over Evelyn Williamson at this point with these four the only women to go under 11 minutes.

Ten minutes behind the women the men were started and another 8 minutes 54 seconds later it was Brent Foster leading from the water with and an eight second gap back to Kieran Doe. Stephen Peterson had another of his excellent swims in third with Malcolm McGregor recording 9 min 37 sec for fourth place.

Out onto the five kilometre run the placings were shuffled for the first half a dozen women with once again New Zealand’s own Olympic representative Evelyn Williamson ending up on top of the deck as she ran home for her fifth win in a row. Kirsty Whiting repeated her second placing from Races 4 and 6 while Hideko Ando proves that swimming is not her only forte as she clocks an excellent run split to take third. Nicole Cope ran well to move up for fourth place heading off Vanessa Palmer.

Back to the men’s field and it was Brent Foster leading soon after the start, Brent leading at the end of the swim, Brent leading out on the run and so no surprise that it was Brent Foster winning yet another Stroke & Stride. Kieran Doe has been the revelation this season and he held his second place to the finish line, which is no easy feat when third place is taken by Liam Scopes who did so by recording the fastest run of the day. Just seven seconds back was Malcolm McGregor and then it was Bryan Rhodes rounding out the top five.