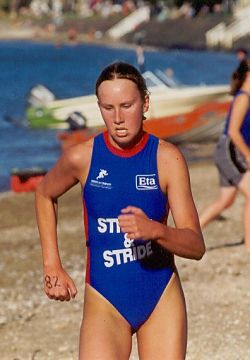 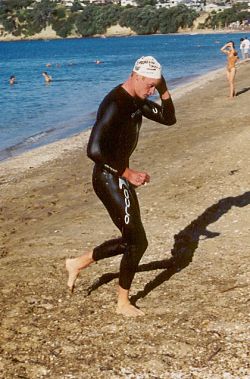 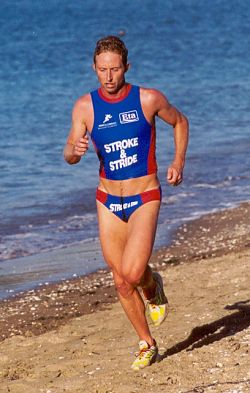 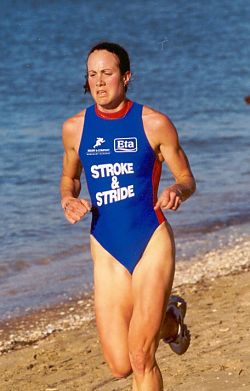 The heat setting got turned up to high at the Reesby & Company Stroke & Stride Series when Race #5 got underway at St Heliers Bay. On the one hand you had a scorching summer’s day in Auckland City with the sun not releasing it’s blazing grip one iota as the 6.15 evening start time neared. On the other hand the level of competition also jumped up a degree or two with a couple of new faces on the start line. Not only is this the fifth event of this season but it is also the 90th Stroke & Stride since the Series inception 11 years ago.

The shortest distance between two points may be a straight line but the leading females didn’t pay too much attention to this theory as they veered well off course on both the inward and outward legs of their 750 metre swim. They only had to contend with a slight offshore breeze and dead calm seas so perhaps those mysterious currents that sometimes make an appearance out our race venue can be blamed for their meandering. At the end of the swim it was again Rebecca Nesbit who emerged first from the water in a time of 10 min 30 sec, Bec Linton was the only athlete to stay close just 10 seconds behind with a big 45 seconds back to Debbie Tanner, Evelyn Williamson and Donna Phelan who all were expected to show out on the run.

The men’s field had had the chance to observe this wayward wandering and swam a lot straighter for their turn around the boys with again Steven Ferguson leading the way in a time of 9 min 12 sec. His time was good enough to open up a nearly half minute lead over the chase group comprised of Brent Foster, Kieran Doe and Hamish Carter. This was Hamish Carter’s first Stroke & Stride for six years but he hasn’t exactly been sitting around with his feet up in the interim and it was an ominous sign for his competition that he was so well placed at the half waypoint.

Meanwhile back at the woman’s race. It wasn’t too far into the fast and flat 4 kilometre run that our Series leader Evelyn Williamson moved into her preferred position at the head of the field and she held this through to the finish for yet another victory in the Series. Debbie Tanner was having her race of the season as she backed up a superb swim with a solid run to capture second. Newfoundland, Canada is just about as far away from Auckland City as you can get but Canadian national team member Donna Phelan had made the trip downunder and was now turning up heat on the locals as she also burned up the course to move through to third. Nicole Cope recorded fast run of the day on her way to fourth while Heidi Alexander and Bec Linton ran stride for stride down the beach to decide the next two places.

Series leader and Stroke & Stride legend Brent Foster snatched an early lead on the outward journey of the run but was soon it was Hamish Carter displaying his class as he took control of the race while Kieran Doe did his best to hold on to these two more experienced campaigners. And that’s how it stayed though to the finish line with Hamish taking the victory, Brent in second and Kieran third. Bryan Rhodes and Malcolm McGregor had exited the water within seconds of each other and stayed in close contact during the run before taking out the next two places.

History has shown that consistency is always the major ingredient required to cook up a win in the Series Championship and consistency is just what Evelyn Williamson (2nd, 1st, 1st, 1st & 1st) and Brent Foster (2nd, 2nd, 1st, 1st & 2nd) have displayed in the first five races as they stake their claim for overall honours this season. These two are being pursued by a number of athletes who are also engaging in all sorts of battles to attain ascendency in the quest for those elusive points.