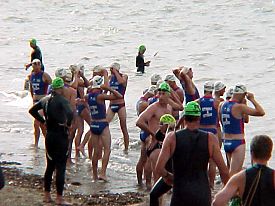 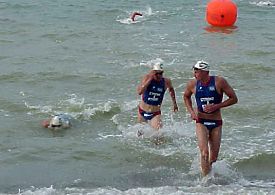 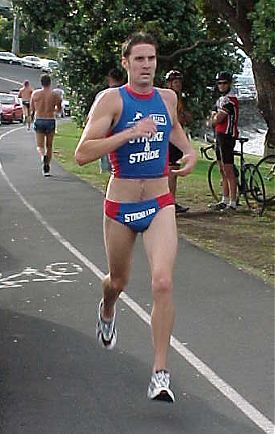 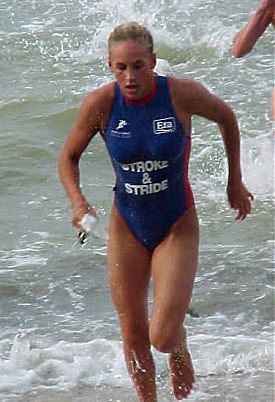 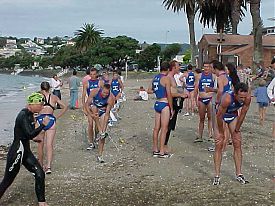 When a Stroke & Stride is scheduled smack, bang in the middle of the New Zealand summer holidays it is only right to expect a summer’s day is also on the schedule. And so it was for Race #4 of the Reesby & Company Stroke & Stride Series. Unfortunately a balmy, summer’s day in Auckland wouldn’t be complete without a sea breeze kicking in during the afternoon and that was exactly what the competitors were facing as they lined up on the beach for the start of the 1000 metre swim at St Heliers Bay. It wasn’t the steady onshore wind that was the worry; more the steep little chop that it kicked up that was doing it’s best to throw competitors off their stroke especially in the first 300 metre leg heading straight offshore. Another hindrance that the pro field had to contend with was that for this event they wouldn’t have the advantage of swimming in their wetsuits and to further confound matters the men’s and women’s field were started at the same time.

Swimming without wetsuits results in slower times than normal but it was still the renowned swimmers leading the way with our Olympic swimming rep Steven Ferguson again first from the water in a time of 12min 28sec but hot on his heels was Brent Foster and Haydn Woolley. Another few seconds back was Adam Jackson and then a select group including our first women, Rebecca Nesbit in 12min 48sec and Bryan Rhodes and Stephen Peterson. This group had opened up a 45 second gap back to the chasing bunch who were lead in by Malcolm McGregor and included Jillian Wood, Evelyn Williamson and Kirsty Whiting.

An out and back, dead flat, 3 kilometre run along the Tamaki Drive waterfront can’t shake up the placings too much but it is more than enough for our defending Series Champion, Brent Foster, to say “Sayonara” to his company after the swim, and then record the fastest run split of the day on his way to winning his second race in a row. Bryan Rhodes has been renowned of late for his performances over the longer distances but he’s still got what it takes to do the damage in these sprint events and he also recorded a snappy run split as he ran through to take second place. Haydn Woolley repeated his third placing from the previous race while Adam Jackson’s first outing for this season claimed fourth spot just holding out fast finishing Malcolm McGregor.

In September last year Evelyn Williamson represented New Zealand at the Sydney Olympic Games, this summer she has stamped her dominance on the Stroke & Stride Series with one top finish after another. This race was to be no different as she again put together a first class swim and run to chalk up another victory. Our current New Zealand Swim/Run Champion, Kirsty Whiting returned to the Stroke & Stride for her first event of the season and chased hard all the way to take second place. Nicola de Lautour brought her running legs to this race and used them to move through to third for her best result of the season edging out Heidi Alexander and Vanessa Palmer.

With today’s victories Evelyn Williamson and Brent Foster have both opened up a huge lead in their quest to become Stroke & Stride champions. The Grand Prix is more closely fought in the minor placings but it is still only the half way point for the eight race series so there’s lots more action to come.