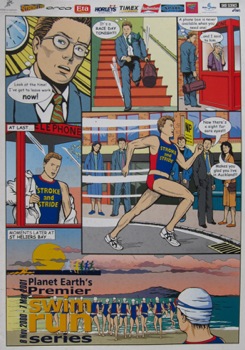 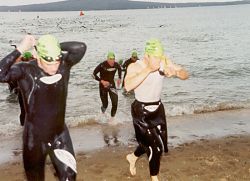 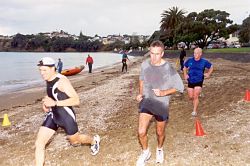 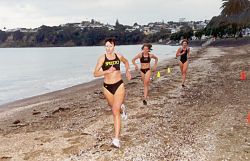 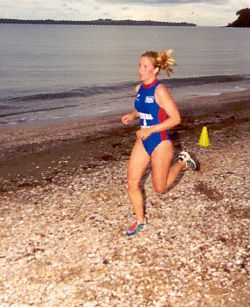 The first race in the season’s Stroke & Stride Series supposedly signifies the start of summer but over the past couple of seasons the first race has more closely resembled the final day of winter. The forecast for this season’s Reesby & Company Stroke & Stride opener was for gale force winds but fortunately these were not apparent in the sheltered bay of St Heliers however it was cold and for the few that braved the swim without wearing a wetsuit it was a chilly start to the season. While the temperatures may have been on the cool side, one thing that was hot was the caliber of the field lined up to start as they chased the $20,000 in Prize Money on offer.

The women’s field were started first and although the swim is only 500 metres for this race, Caroline Collard wasn’t waiting around for company and by the half way point had opened up a 10 second lead over the chasing pack. The cold water didn’t slow down the times and Caroline recorded a sizzling 5min 59sec running back up the beach followed by Rebecca Nesbit and Anna Cleaver now more than 20 seconds behind.

Out onto the run and it was Evelyn Williamson who moved to the front of the field closely followed by Jo Lawn and with Nicole Cope also gaining ground with every step. It was Nicole Cope who won the opening race last season and she repeated the victory this year, over coming her 7min 45sec swim to just head off Evelyn Williamson who in turn only just kept her nose in front of Jo Lawn at the line.

Defending Series Champion, Brent Foster would have preferred the swim to be longer and the conditions to be rougher to give him more of a chance to put some distance on his rivals in the men’s field.

The 500 metres proved enough for him to lead the classy field by swims end but the lead was only a matter of seconds and with a slow transition thrown in, Brent really had his work cut out over the 5 kilometres.

Someone who had made short work of the swim was Paul Amey and with his always stellar run it wasn’t long before he was leading the field on the run to Mission Bay and return. This lead only got bigger as he burned up the kilometers to take his first win in a Stroke & Stride since 1997.

Brent Foster wasn’t going to let anyone else get past him and held on for second ahead of another classy runner in Liam Scopes.