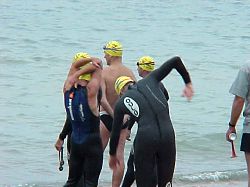 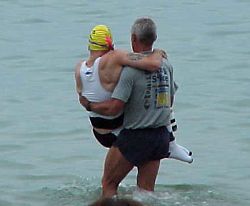 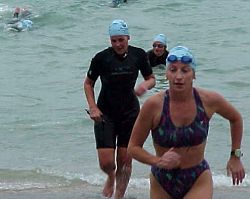 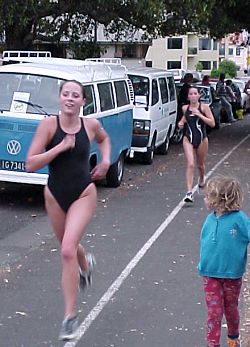 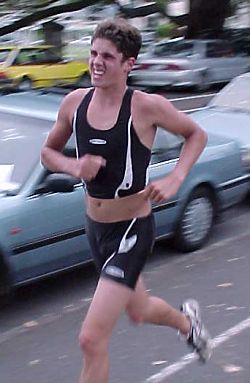 The penultimate race in this season’s Stroke & Stride Series was held under dark grey skies with the ever present threat of rain. Fortunately the rain stayed away until everyone had packed up and headed home and while the conditions were far from summery the smooth seas and absence of wind were perfect for some fast and furious racing. Stroke & Stride Race #7 was held over a 750 metre swim followed by a 5 kilometre run and it was now the real business end of the season for competitors tussling for points in the PHASE Grand Prix.

Again it was Rebecca Nesbit who got a break on the women’s field during the swim recording a swift 9m 20s for a 16 second advantage over Marisa Carter with a further 14 seconds back to Hayley Swaving and then Debbie Tanner, Juliet Tompkins, Kirsty Whiting and Desiree McCarthy all going under 10 minutes. Defending Series Champion Heidi Alexander recorded 10m 12s, Nicole Cope 10m 54s and Julia Scopes 11m 45s. Marisa Carter shot to the front of the field early on in the run but it was Nicole Cope making the greatest strides out on the pavement closing to within metres of the outright lead with just a kilometre to go. Not far behind these two, Heidi Alexander had now caught Kirsty Whiting but Kirsty wasn’t giving up third place without a fight. Up the beach to the finish line it was Nicole Cope repeating her win in Race #1 and claiming her second victory of the season with Marisa Carter having to settle for second. In third place it was Heidi Alexander who just held out the determined Kirsty Whiting by one second with Debbie Tanner rounding out the top five.

The men’s field were revelling in the fact that the defending Series Champion; Brent Foster was not in attendance for today’s event. Robbie Baff lead the charge out on the water recording 8m 57s, five seconds clear of Chris Williams with Will Green just another couple of seconds back. Oliver Tompkins recorded 9m 07s, while Liam Scopes 10m 10s and Rodney Gordon 10m 31s were both handily enough placed to inflict some damage on the run leg. Chris Williams had so far recorded four second placings this season and when he was presented with a crack at finally winning a Stroke & Stride he grabbed the opportunity with both hands and ran away from the field to record a fine first time win. Will Green had missed most of the season’s earlier races but he picked up where he left off from last season with a strong second placing just holding out the flying Liam Scopes. Rodney Gordon was another flying over the run course moving through to take fourth with Samuel Walker having his best race this season next home in fifth.

With one race to go the PHASE Series Grand Prix has reached a critical stage with ten male and ten female competitors having crossed the 40 point threshold. With further points to be awarded from Race #8 there’s another dozen or so athletes still in with a chance of making 40 points. Current leaders, Marisa Carter and Brent Foster are looking hard to beat but it’s still up in the air as to who will finish in the top 5 and in what order to share in the prize money on offer.