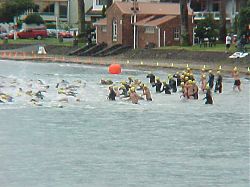 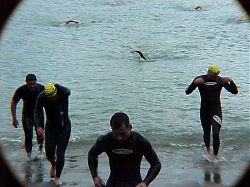 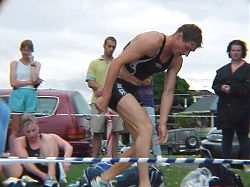 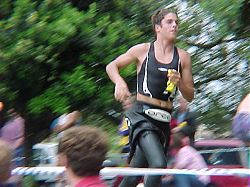 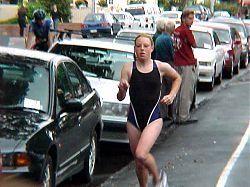 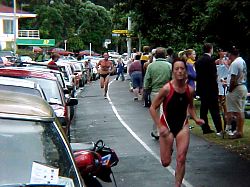 The first race of the New Year was party time for the Stroke & Stride as the Series clocked up it’s 80th ever race and also celebrates its 10th birthday. In honour of this momentous occasion it was only fitting that conditions for the evening’s event were ideal for some fast and furious racing. The Waitemata Harbour was again doing its best to impersonate a rather large swimming pool and there was no wind to speak of out on the run course.

At the end of the 1000 metre swim Rebecca Nesbit and Anna Cleaver had opened up a fifteen second lead over Juliet Tompkins with a further 36 seconds back to past Series Champion Marisa Carter who lead in a stream of other contenders for this year’s championship. Once out on the 3 kilometre run it was a whole new story for the New Year.  Anna Cleaver just raised the stakes in the women’s competition once again as she ran away from the rest of the field to record her first ever victory in a Stroke & Stride by a more than healthy margin.

Marisa Carter got up for second place on the night ahead of early leader Rebecca Nesbit who just held out Juliet Tompkins. Fastest run again went to Nicole Cope who claimed fifth place.

The Stroke & Stride has seem some hard fought battles to decide the female Series Champion over the years but never before have we had four different winners from the first four races in a Series. With Nicole Cope, Marisa Carter, Heidi Alexander and now Anna Cleaver all triumphing in the first half of the Series the action is sure to be white hot in the remaining races.

The one obstacle standing between the men’s field and winning a Stroke & Stride is again the same as it has been for the most of the last decade. Six time Series Champion Brent Foster is once again in the sort of form that lifts him head and shoulders above any who may choose to challenge him. Adam Jackson again showed just how quick in the water he is as he poured on the pressure to lead the swim but Brent Foster was only a stroke behind as they hit the beach.

Scott Rice and Daniel Pritchard were the next in while current Series leader Chris Williams was a minute down on the lead starting the run. If the crowd was feeling a sense of déjà vu it wasn’t just that Brent Foster again ran away for yet another win but also because Adam Jackson and Chris Williams claimed second and third to repeat the first three placings from our previous event six weeks ago. Next to finish was the winner from Race #1, Clark Ellice who just got home ahead of James Elvery.

At the half way stage in the PHASE Grand Prix Marisa Carter has opened up a 15 point lead and if she can maintain her consistency through the remainder of the Series she is looking good to reclaim the Series title she last won in 1993/94. In the men’s field Mr. Consistency is Chris Williams with a string of top finishes and he is rewarded with a share of the lead at the half way point.

Brent Foster has racked up three wins from his three starts and may well be tightening his grip on the Stroke & Stride Cup yet again.

Along with the more than $3000 in prize money on offer, nine athletes have already cracked the magical 40 point barrier which entitles them to receive a PHASE Heart Rate Monitor at the Series end.