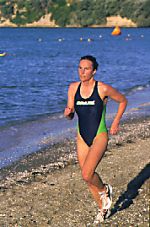 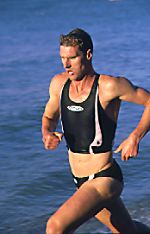 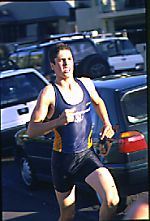 The city of Auckland is notorious for it’s changeable weather and it would be hard to imagine a change any bigger than the arduous conditions encountered 19 days ago at Race #1 and the pristine day laid on for Race #2. The sun was shining and the light offshore breeze ensured that the Waitemata Harbour was at it’s sparkling best for the 750 metre swim. The swim was over the big triangular course with the final leg parallel to the beach back up to the swim exit and the only tough part was trying to spot the final buoy while looking into the setting sun. The conditions were also superb for the out and back 4 kilometre run to Mission Bay taking in the spectacular scenery that is Auckland on a summer’s day along the way.

The women’s field was started first and it was Rebecca Nesbit putting in the fastest swim of the day and first to enter transition after less than 11 minutes had elapsed. 15 seconds back in fourth place Marisa Carter came ashore and over the next minute there was a continuous stream of swimmers exiting the water including top contenders Hayley Swaving, Debbie Tanner, Kirsty Whiting, Nicola de Lautour and Heidi Alexander. These girls were certainly not taking any time out to enjoy the scenery on the run. By the time they returned to St Heliers Bay it was past Series Champion Marisa Carter who had moved into the lead which she held to take the win just ahead of defending Series Champion Heidi Alexander who claimed the fastest run split of the day and second place. Nicola de Lautour’s first race of the season saw her in great form and claim a great third placing just ahead of Kirsty Whiting and Anna Cleaver.

Brent Foster’s rare absence from a Stroke & Stride at Race #1 had opened the door of opportunity to the new boys on the block. But bad news boys, Brent’s back and he’s just slammed that door shut again with a resounding victory recording fastest swim and run splits on the way. After opening up a 30 second lead on the super smooth swim leg, he then extended his lead to more than a minute on the run. And the news gets worse, because he made it look easy and possibly even was enjoying the scenery on the way. So the rest of the men were racing for second and it was again Clark Ellice backing up from his victory in the first event that was the best of the rest and grabbed a valuable second place this time just ahead of Chris Williams and James Morgan. Adam Jackson was another having his first race of the season and recording an impressive fifth placing.

It’s early days yet in the PHASE Grand Prix but Clark Ellice has already moved 7 points clear of the men’s field while the race for points between James Morgan and Chris Williams is just as close as their race for the line in the first two events. Marisa Carter and Heidi Alexander have just one point separating them at the head of the women’s field with Kirsty Whiting their closest challenger at this stage.