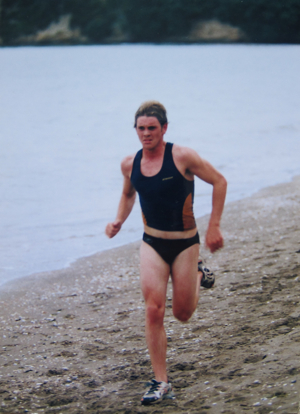 When the going gets tough, the tough get down to St Heliers Bay for the first Stroke & Stride of 1999. A little bit of rain wasn’t going to stop these intrepid individuals this Thursday evening. And if you think a bit of wind and rain makes conditions less than ideal for competing well spare a thought for Murray from Shoe Science as he battled the elements to barbecue a few hundred sausages on the night.

Because of the weather and the fact that no one wanted to stand around any longer than necessary the decision was made to start the men and women at the same time for a change in racing style.

The 1000 metre swim was held over a triangular course with the men and women battling it out with one an another heading straight out to the first buoy, not helped by the aggressive little chop kicked up by the onshore wind. It made for interesting spectating seeing just how the girls can match it with the boys.

As expected Brent Foster came out in 12 minutes commanding a lead of 35 seconds ahead of Will Green and the rest of the pack. Amongst the top ten to exit the water together were Marisa Penticost and Debbie Tanner, going to show the strength of the women’s field in the swimming discipline. On the run it was fast and furious with only the 3km to Kohimarama and back to make up or maintain any positions gained from the swim. Brent Foster cruised home comfortably taking men’s honours, almost two minutes clear ahead of William Green who himself was another minute clear of third placegetter, Jonathan Counsell. Chris Williams held out visiting athlete, Jochen Cals for fourth place.

In Race #3 over the same distances Marisa Pentecost had held out Debbie Tanner to claim first place. This time out Debbie managed to run that little bit faster than Marisa to take Women’s honours and place herself eighth overall amongst the men. Marisa finished just 17 seconds behind her coming in tenth overall. Heidi Alexander and Sue Clark had the fastest run splits of the day and ran through for third and fourth just ahead of the fast finishing Kirsty Whiting.

The battle for the Series Grand Prix returns same time, same place in a fortnight. Will Brent Foster’s South Island sojourn take the edge off him? Will Heidi Alexander return to the top of the podium? Will the men’s field demand to be started separately from the women to prevent further embarrassment? Stay tuned for more action.