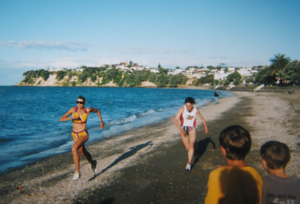 After the weather conditions of recent weeks, St Heliers Bay offered no surprises with its choppy conditions at the second race in the Stroke & Stride Series.  But the surprise package came in the form of 25 year old Peter Clode, who wrestled victory in the 750 metre swim and 4 kilometre run from tight competition, including past Series Champion Brent Foster and the victor from Race #l, Nathan Richmond.  Commenting after the race, Clode took a humble stand and tagged his win “lucky”.

“I’m surprised,” grinned Clode.  “I should have been chasing Foster.”  But Clode who left the water in the top eight may thank his arduous training for international triathlon races over recent months, which appears to be paying dividends.

The wind, that had been gusting up to gale force in the days proceeding, dropped considerably for race day and some rare Auckland sunshine created fairly steady conditions for the generous crowd of competitors and spectators.

The strong field included top ranked national athletes as well as competitors from Germany and England.  The windy conditions caused slight difficulties with some swimmers taking the wrong direction after rounding the first buoy.

Last race winner, 17 year old, Nathan Richmond who came in sixth, said the swell disorientated the lead swimmers causing them to swim for the wrong buoy creating a “frustrating” loss in time.  With the race being fairly compact and with the strong opposition present, a loss like this is hard to make up.  Richmond said, “The choppy conditions of the sea meant I had to pick up my pace on the run, but 4 km isn’t lengthy enough.”  Richmond left the water in 11th place.

Brent Foster was another forced into the unusual position of having to chase during the run leg and he managed to catch all in front of him and closed to within five seconds of Clode at the finish.

Malcolm McGregor was one who didn’t stray off course during the swim and backed up with a fine run leg to take third ahead of two of the sport’s recognised run specialists in Walter Thorburn and Paul Duffy.

Consistent with her winning comeback race two weeks ago, Heidi Alexander (23) took first place inthe women’s race.  Alexander, who juggles full-time motherhood, full-time design school and a heavy training routine, says she would be lost without the demands of all three.

“They keep me focussed.  Each feeds the other.”  Obviously her motivation is at a peak, speaking before the race on Thursday, Alexander said, “I am performing better than last time.”  ‘Last time’ meaning her string of successes including seventh in the 1995 Ironman and three consecutive junior World Run-Bike-Run titles.  After a break to have her baby last year, Alexander has re-emerged and is quickly proving an ‘overnight success.’

Prior to the race Alexander was reticent as to predicting the outcome, and although pressurised by her win in Race 1, she proved herself a capable. consistent champion.

Alexander swam well to be close enough after the swim that she was quickly able to take charge during the out and back run leg.  Suzanne Clark is another talented athlete who has won more than a few races over the years but on this occasion had to be content with second behind the flying Alexander.  Naomi Calder was one of the first out of the water and ran through for third ahead of 16 year old Nicola de Lautour who just pipped Sue Attwood for fourth.