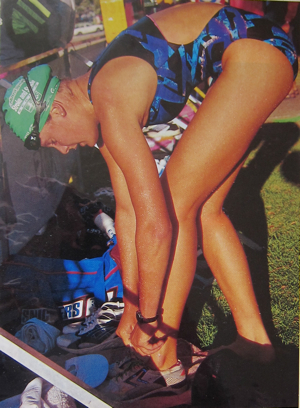 Race 8 of the NutraSport Stroke and Stride Series was not only the final race of the Series but also the 1995 New Zealand Swimrun Championships. Held over a 1500 metre swim and 10km run the race carried double points for those athletes contesting the Series Grand Prix.  Conditions for the swim were far from ideal as a stiff north-westerly wind blowing down the harbour created choppy conditions.

The women’s field were started 10 minutes before the men and it was no surprise to see Jo Craddock emerge first from the water in a time of 18 minutes 20 seconds.  The next women out was Australian Jan Wanklyn who was 2 minutes 30 seconds behind.  Other top women forced to play catch up setting out on the run were Megan Evans 20m 56s, Natasja Hilgeholt 21m 50s, Roxane Benney 22m 12s and Anne Buckley 23m 46s.

At the end of the men’s swim leg it was Brent Foster and John Munro out in front and they hit the beach in a time of 17 minutes and 17 seconds.  They were followed in by Stephen Sheldrake, Malcolm McGregor and Dean Foster 18m 40s, Bryan Rhodes 19m 02s, Walter Thorburn 20m 01s, Jared Letica in 20m 02s, Rodney Gordon 21m 34s and Mark Hutchinson in 22m 31s.

Not only is the 10 kilometre run twice as long as any other run in the Series but it also throws in a rather nasty hill for the competitors at the halfway point.  By the time competitors had reached the 6 kilometre mark Jo Craddock was still leading the women’s field however Jan Wanklyn was now only 6 seconds in arrears and Heidi Alexander had moved through for third a further minute behind.  Brent Foster still lead the mens field but Jared Letica was going like a train and had moved into second and was now only 70 seconds down with 4 kilometres to the finish line.

Jan Wanklyn tasted victory on the Auckland Waterfront when she won the 1991 New Zealand Ironman, four years later she returns to win the 1995 New Zealand Swimrun Championship with an excellent combination of swimming and running abilities.  Heidi Alexander moved through from fifth after the swim to second at the finish line to be first New Zealander home while Jo Craddock held on to third place.  Natasja Hilgeholt raced solidly to hold fourth place while Anne Buckley was the big mover on the run to get up to fifth.

Last year Brent Foster lead from start to finish to win the New Zealand title, this year he would have done the same if it hadn’t been for the tremendous improvement that Jared Letica has shown through the Series.  Jared Letica passed Brett Foster in the final kilometres of the run and finished a convincing winner of the 1995 New Zealand Swimrun Championships.  Brent Foster took second ahead of Walter Thorburn and Rodney Gordon while Stuart Blake held fifth place.

Brent Foster won the Stroke & Stride Series Grand Prix for the third year in a row.  His 131 points gave him a clear lead over his competition and was achieved with his four first placings and two seconds.  The only athlete to look like challenging Brent and certainly the biggest improver was Jared Leticia.  Jared did all eight races in the Series and his 112 points came from finishes of 12th, 9th, 15th, 5th, 2nd, 1st, 2nd and 1st.  Only one point separated Rodney Gordon and Mark Hutchinson in third and fourth while Malcolm McGregor was also in the money in fifth position.

Unlike the men, the women‘s Grand Prix had no clear favourite going into the final race.  After seven races Heidi Alexander, Jo Craddock and Anne Buckley were all contenders for the Series title and Race #8 with double points would prove the decider.  Jo Craddock capped off a glorious debut season in the Series with her third placing in the final race which gave her 120 points and the Series Grand Prix.

Jo’s points came from three firsts and three third placings.  Pushing her all the way and finishing on 117 points, Heidi Alexander also did all eight races with the following results 3rd, 3rd, 4th, 2nd, 2nd, 2nd and 2nd.  Anne Buckley was a clear third on 95 points while Roxane Benney and Lorene Smith both had great Series to take fourth and fifth respectively.