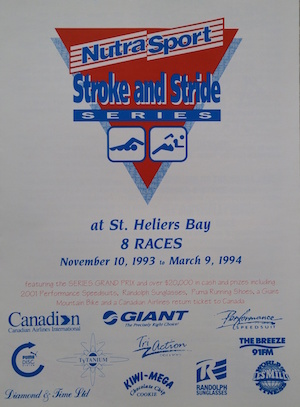 After the cancellation of Race #1 because of the downright dangerous weather conditions, competitors in the NutraSport Stroke and Stride Series were pretty keen to go out there and do the damage at Race #2.

The women’s field started 5 minutes ahead of the men, and although the 750 metre swim was shortened slightly to avoid rocks on the shoreline, super-swimmers Louise Soper and Marisa Pentecost had a commanding lead coming out of the water.  The chasing bunch included Tracey Wilson, Heidi Alexander, Roxane Benney and Sue Clark.  After a quick transition, these women set off after the leading pair on the 4 kilometre run.  When they hit the beach in the final charge to the line, Sue Clark had come through to take the lead, edging out Marisa Pentecost who beat Louise Soper by three seconds.

For a very large gathering of spectators the Men’s field provided a real blanket finish, with only 8 seconds separating the first four places.  Last year’s Series Grand Prix Champion Brent Foster had his usual impressive lead out of the water, but again the pack chased hard, over the flat, out-and-back course.  ln the final run stages, Walter Thorburn, recently retumed from the Hawaii Ironman, squeezed ahead of Brent Foster to win by two seconds, with junior William Smith coming in third with Chris Andrews fourth.

Another notable entrant was Paul Kingsman, Olympic medalist in the pool, who found the tarmac a more difficult surface to master and finished a little down the field!