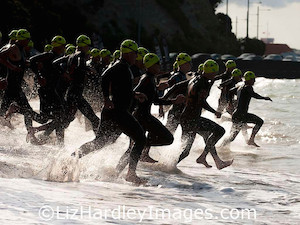 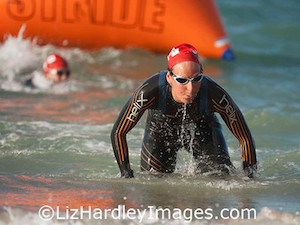 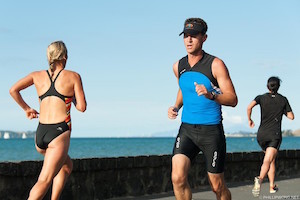 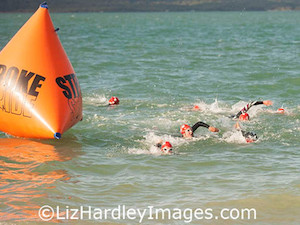 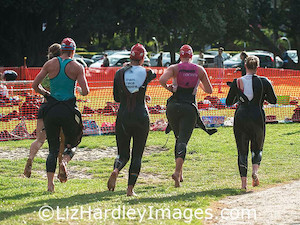 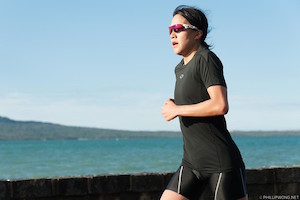 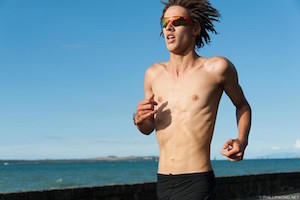 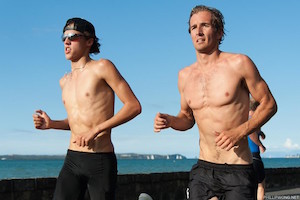 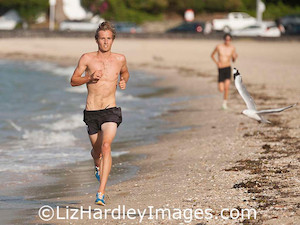 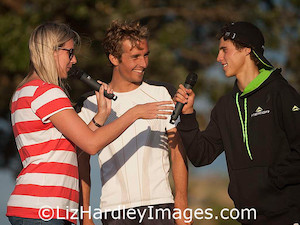 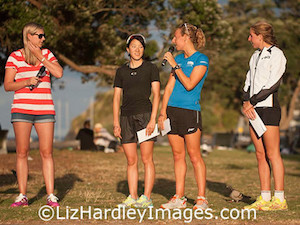 Race #6 in the Stroke & Stride Series is one for the runners ending with the juicy five kilometre run to decide things.  However this is Auckland and it is a Stroke & Stride so despite or because of the swollen high pressure system sitting all over the country we get served up a gusty onshore wind and chopped up sea state on race afternoon.  Therefore what should really be just a pesky little 500 metre swim to dispense with before getting into the meaty run leg turns out to be a challenging dash around the cans.  Speed, power and navigation all vital to ensure that time is not lost in the first segment of the race.

The men were first to start and after punching their way out to the half way point the front of the field was fragmenting as two swimmers started to pull ahead.  The third leg into the beach was definitely the fastest as now that gusting wind and messy chop was all from astern giving a downhill effect to those in the right place to catch a wave.  The best swimmers at Stroke & Stride this summer are Cameron Todd and Jay Wallwork and like most great swimmers they love this stuff and excel in putting their bodies in the right place at the right time to catch every advantage out there. Enough advantage for them to record a 5 minutes and 50 seconds swim and give them a 20 second lead over Quinn Wallwork who is certainly no slouch either on the water.  A further 10 seconds back came James Matthews starting a procession of clusters of swimmers exiting the sea as the clock now ticked over the six and a half minute mark with Matthew Roets, Nicolo Oporto, Matthew McQueen, Tom Duncan, Todd Rowan and Ryan Helg prominent at the front.

Defending Series Champion Rebecca Clarke makes a habit of leading out the women during the swim and these testing conditions were also to her liking as she recorded a scorching 6 minutes 2 seconds for the half kilometre however that was just 4 seconds ahead of Yuko Takahashi racing Stroke & Stride for the first time.  Then it was reinforced just how well these two had swum the testing 500 metre course as it was 6 minutes 51 seconds before Amelia Watkinson hit the beach ahead of Rose Dillon and a well spread chasing pack that included Asheligh Williams who clocked 7 minutes 1 seconds and Katherine Badham 7 minutes 25 seconds.

Once the men’s field got onto the road for their run leg it was quickly apparent that again in 2015 there was a battle on between our two top athletes.  Cameron Todd and Jay Wallwork simply swim and run faster than everyone else this summer.  The healthy advantage they had exiting the water was soon extended as they ran stride for stride at the head of the field and ultimately rounding the final corner to close on Mission Bay and complete the 5 kilometre run leg. Then Cameron Todd changed gear and opened a gap on his running companion and he held this through to the finish to score a threepeat of wins.  Jay Wallwork once again had to settle for second and once again his lead in the Series Grand Prix was being eroded. However the Wallwork family had cause for celebration as Quinn Wallwork had a flying run leg to back up his fine swim and took third place and his best ever Stroke & Stride result. Consistency rewards Matthew Roets with a fourth place finish matching his result from a fortnight earlier while Matthew McQueen again turns in a solid race for his best result of the season.

That balmy little breeze was recording gusts of around 15 knots around the exposed waterfront run taking competitors as far as the turn cone at St Heliers Bay.  Most of this was from the side but with the twists and turns sometimes it was a tailwind and then also a headwind.  The one athlete who looked to be excelling in these conditions was the flying visitor Yuko Takahashi as she moved into the lead early on and then ran with effortless ease all the way back to Mission Bay.  Japan’s Yuko Takahashi ended up taking a comfortable victory on debut in style.  However Rebecca Clarke was keeping the pressure on all the way and she finished in second place just 13 seconds in arrears. Next was the classy Amelia Watkinson snaring a podium finish in her first race of the summer.  Ashleigh Williams took fourth place and banked more of those valuable points as did Katherine Badham in fifth spot.

The Series Grand Prix can now be likened to a game of high stakes poker as our players attempt to draw better cards or in this case points in the latter rounds to improve their hand.  The difference is that unlike poker there’s not a lot of luck involved in winning the Stroke & Stride Series.  More comparable to a prolonged battle with skirmishes at regular intervals and grit, determination and the ability to defy attrition necessary to prevail.  The season started and it was all Jay Wallwork (1st, 1st, 1st, 2nd, 2nd & 2nd) but since Christmas the focus has switched to Cameron Todd (4th, 1st, 1st & 1st) so Jay’s lead that had looked insurmountable has now been pared back to 21 points which is still a solid advantage but the final two events will decide the Stroke & Stride Championship. Third place is owned by Quinn Wallwork (8th, 9th, 5th, 5th, 6th & 3rd) unless he gets the speed wobbles and gets overtaken any of the throng of atletes queued behind.

At the previous race Rebecca Clarke (1st, 1st, 2nd, 1st & 2nd) claimed the lead in the Grand Prix from Ashleigh Williams (1st, 3rd, 2nd, 9th, 2nd & 4th) and presently holds a 12 point advantage. It is an athlete’s points from Race #8 their best five other races that count towards the final totals so this competition is far from decided. Katherine Badham (2nd, 4th, 8th, 10th, 4th & 5th) holds third place on 62 points however she has Danielle Parkinson 56 points and Rebecca Spence 49 points sitting just behind.

We’ll find out just who is going to move up or not when the next edition and penultimate race is contested on Tuesday, March 3rd.