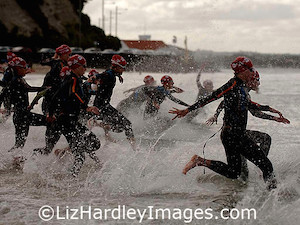 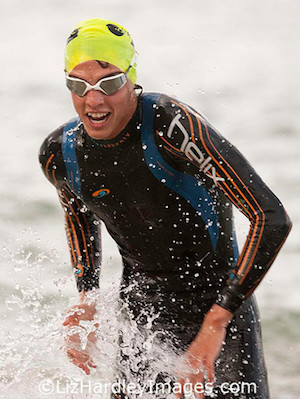 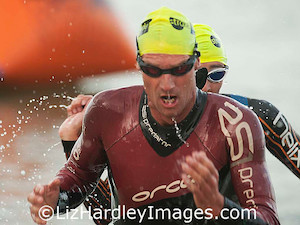 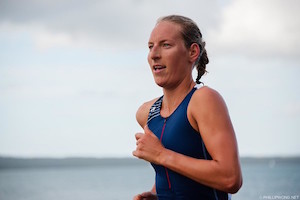 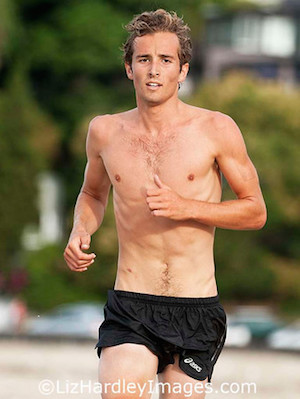 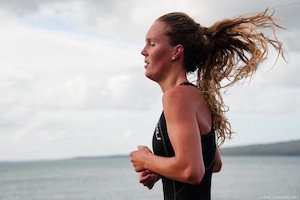 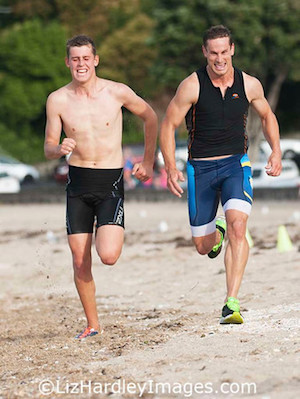 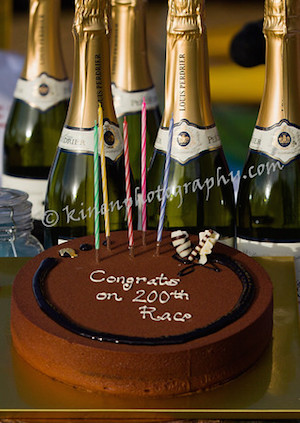 Every now and then Auckland gets an absolutely perfect day for racing and we had just one of those days for our milestone event, the two hundredth Stroke & Stride of all time.  There were generous dollops of sunshine, balmy temperatures, a hint of a breeze blowing in the correct direction, the high tide filling up the sparkling Waitemata Harbour beside the golden sands at Mission Bay and a throng of entrants lined up and ready to enjoy their race.  Moving into this second half or business end of the season is when every race, every place, every second counts big time so from this point forward we look for an extremely spirited Series to tighten up even more.

The 750 metre swim looked to be as easy a 750 metre swim can be with no disturbing winds, hardly a ripple on the surface and none of those subversive currents to encourage you to wander off course.  These cakewalk like conditions are not what most of the really quick swimmers prefer as they are much more likely to extend their lead when there are adverse conditions to overcome out on the water.  The women were away first and again time trialling at the head of the field was Rebecca Clarke as she demonstrated once more that she is the form swimmer recording a flash 9 minutes 5 seconds as she touched the shore.  There was then a 30 second break back to Hannah Williams who was followed in by Danielle Parkinson and then the first bunch timed at 10 minutes 17 seconds with current Series Leader Ashleigh Williams clocking 10 minutes 25 seconds. It didn’t take long at all before all the woman’s field were up the beach and into transition to change into their run shoes and hit road.

Coinciding with this rush out onto the pavement was the start of the men’s event and after they had negotiated the two turn buoys and were fast approaching the shore there were three swimmers well clear from the rest of the field. Unusually they weren’t in the typical arrowhead formation with one swimmer leading; these three were spread out, each taking their own line and looked much more like they were in a sprint race to be the first to reach the beach. And perhaps they were as Jay Wallwork was wearing a giant smile when he stood up and glanced across to see he had just pipped Brent Foster and Cameron Todd in their battle back to the beach. Jay recorded 8 minutes 44 seconds, Brent 8 minutes 45 seconds and Cameron 8 minutes 46 seconds which was good enough to earn our high-speed trio a very healthy 40 second lead over Alex Petrie and the other chasers.

Defending Series Champion Rebecca Clarke was making every stride count out on the road and while those in pursuit may have jostled for places no one was getting anywhere close to the flying Rebecca.  Four kilometres later and she was back on the beach and closing on the finish line and then claiming her third victory of the summer.  Ashleigh Williams ran herself through the field and claimed second ahead of Danielle Parkinson.  Katherine Badham continues her awesome season with an outstanding fourth place home while Claire Macky’s late start to the season doesn’t stop her finishing top five.

The 4 kilometre run took runners as far as the turn at St Heliers before their return. The outward journey was aided by the breeze but that could also bite if a runner exceeded their abilities by starting too fast or ran out of gas in the final couple of kilometres. However Jay Wallwork and Cameron Todd threw caution to the wind as they charged out of transition and down the footpath still shoulder to shoulder and already opening a gap over the more seasoned Brent Foster. Ten minutes later when they returned to view on their approach to Mission Bay it looked very much like a repeat of the previous race a fortnight earlier. Once again Cameron Todd had responded to the challenges and then proceeded to kick away when it counted and open a decisive gap and take the win with Jay Wallwork once more relegated to second. Deja vu was further hammered home with Cameron and Jay’s times exactly the same recorded at Race #4. What was different was that our resident legend Brent Foster was now back where he belonged on the Stroke & Stride podium with a fine third placing. And continuing the theme saw next to finish Matthew Roets and Dylan McCullough both scoring their best ever Stroke & Stride results.

The points earned in this race have at last shuffled the order amongst the top players in the woman’s field.  Since her win at Race #1 Ashleigh Williams has lead the field however Rebecca Clarke’s win today allow her to sneak ahead and she now sits atop the field with a single point lead over Ashleigh Williams so it could not be any closer. Go back 20 points and similarly Katherine Badham is one whole point in front of Danielle Parkinson.

At the end of 2014 Jay Wallwork was looking impervious to all challenges and it was hard to see him not marching towards the Stroke & Stride Series Championship title. And then two races into 2015 and Cameron Todd has chucked a spanner into those works with his sparkling new year form and back-to-back victories. What had looked a sure thing now has the punters reaching for their calculators to work out if these two remarkable swimrun athletes continue to go toe to toe, which of them can or will take the title. But don’t let us get ahead of ourselves, there are still three rounds to be raced and so much can go right or go wrong and it is always a mix of talent and consistency that gets to take the cup home. Plus if either of these two falter then we have Quinn Wallwork and Fynn Thompson still in contention for series honours.

We’ll find out more when the next chapter is swum and run on Tuesday, February 17th.