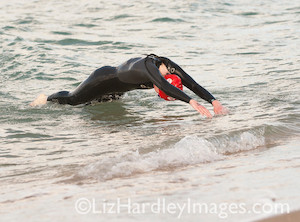 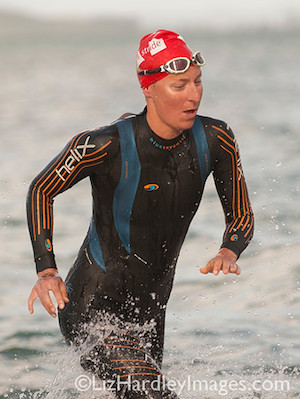 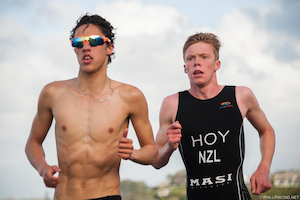 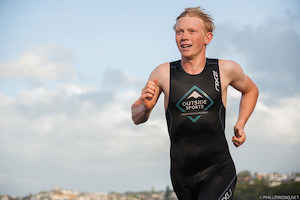 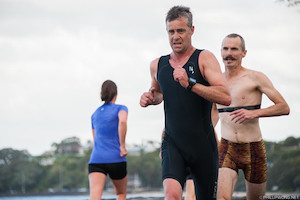 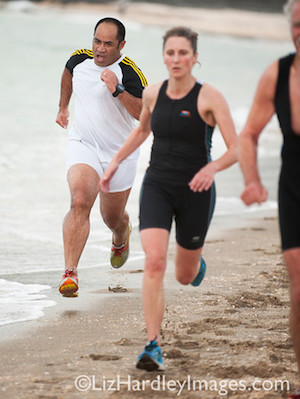 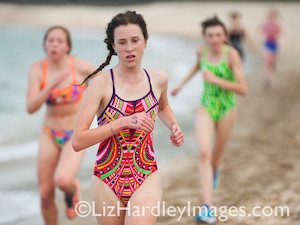 The only sure thing about New Zealand’s spring weather is that it is it is going to change with great frequency and it will be a breeze. Therefore competitors venturing down to the beach for the second race in this season’s Stroke & Stride Series better come prepared for any number of eventualities. The weather forecasters had a high wind warning in place for Auckland and a precipitation prediction for the afternoon. While the wet weather never arrived there was certainly a boisterous, gusty westerly blowing straight down the harbour and across the Mission Bay foreshore.

The next question for competitors was what side of the bed had the swim course committee arisen from that morning. Depending on the direction that course was set, swimmers could be facing either some infernal upwind struggle or finger’s crossed something a little more agreeable. There was more than a few sighs of relief when the 750 metre swim was unveiled to be basically a downwind blast. Making full use of the wide expanse of Mission Bay swimmers had to negotiate only a single marker buoy and could ride the waves for the entire swim if they were smart enough to navigate advantageously.

The men’s field got things started and while in hindsight a few of the men may have wished they had started a little further upwind it wasn’t long at all before they were all surfing their way back into the beach. One swimmer had broken clear and had a distinct advantage as he touched the sand. That swimmer was the reigning New Zealand Swimrun Champion and the winner from the first race of the season Jay Wallwork displaying all his class as he clocked a flying 7 minutes 42 seconds and earned himself a delicious 20 second lead over the preceding Swimrun champ Cameron Todd. Then the floodgates were thrown open with Dan Hoy 8 minutes 4 seconds and Cooper Rand 8mins 5 seconds at the front of a continuous procession of quick swimmers recording hot times to start their day of racing.

While the men negotiated the change area it was the turn of the women’s field lined up along the beach to start their swim and having just watched how the men faired they wisely all took a step to the left to adjust their aim on that distant can. Once again with the conditions lending a hand quick work was made of the swim by the fastest swimmers and closing back on the beach a leading pair had gone clear. Recording 8 minutes 27 seconds was super swimmer Jacey Cropp leading with Series Champion Rebecca Clarke on her toes. Ten seconds later Hannah Williams was flying in solo with a further twenty seconds ticking by before Molly Swanson and Ainsley Thorpe hit the shore with a big trail of swimmers in their wake including likely contenders: Danielle Parkinson 9 minutes 2 seconds, Rebecca Spence 9 minutes 20 seconds, Martina Fellmann 9 minutes 35 seconds, Rose Dillon 9 minutes 42 seconds, Ashleigh Williams 9 minutes 46 seconds and Katherine Badham 9 minutes 48 seconds.

The 4 kilometre run course was out and back down Tamaki Drive as far as the turn cone at St Heliers Bay. This road follows the shoreline and while it twists and turns it is basically heading east on the way out and then west on the way home. So again the aforementioned wind could be both friend or foe. Every runner was loving having the wind for company for the first two kilometres as it pushed them onwards to the turn. This enabled our fast running leading men to run even faster at times. And then heading back to the finish line on Mission Bay beach it was like running with the handbrake on for periods when the full force of the wind hit exposed competitors on the nose. In these conditions Dan Hoy was the athlete running fastest as he closed down that handy lead Jay Wallwork had built during the swim. However Jay Wallwork hadn’t played all his cards and showed just why he is the man to beat in 2014 as he responded magnificently in sight of the line to accelerate away and take his third Stroke & Stride victory on the trot. Just five seconds in arrears Dan Hoy’s superb second placing had the crowd applauding. The man to beat all last season had been Cooper Rand and he starts his new summer of racing with a rock solid third holding off the talented Cameron Todd and the up-and-coming Fynn Thompson.

Twelve months back Rebecca Clarke recorded her first of three victories at Race #2 on her way to taking the title of Stroke & Stride Series Champion. If anything Rebecca has only got faster between the seasons as she again demonstrates by being able to swim with the best of them and then run away to take another overpowering victory. What has happened to Danielle Parkinson? Danielle has been racing strongly at Stroke & Stride for many years coming through the junior grades however a fortnight ago she climbed up and grabbed 7th place overall for her best ever result. This time out and she jumps straight onto the podium in second place on the back of an excellent swim and fine run split. The fastest run of the day goes to third placed Ashleigh Williams and she needed every second to hold off hard charging Katherine Badham and Rebecca Spence who chased her home.

Two races into the season and the story of the Grand Prix is already following two different tracks. With the women we have Ashleigh Williams leading but only by 5 points ahead of a congested chasing group headed by Katherine Badham, Danielle Parkinson, Rebecca Spence and Rebecca Clarke. However with the men early in the season it is Jay Wallwork making all the running (and swimming) as his perfect record gives him a perfect 40 points. Newcomer Fynn Thompson is the best of the rest and if he is still learning the swimrun game he’s proving an excellent scholar with the experienced men currently in his rearview mirror. Every event is crucial in the battle to decide the Stroke & Stride Series Champion with our final event of 2014 next to go off on Wednesday, November 3rd.