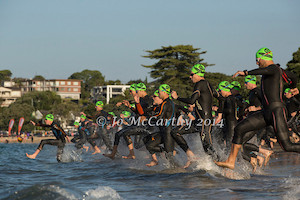 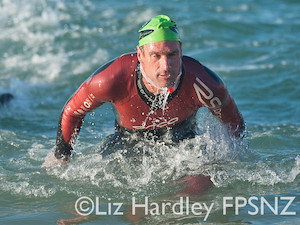 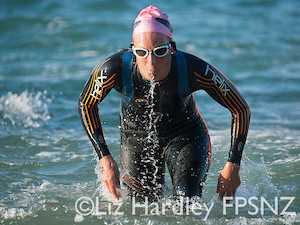 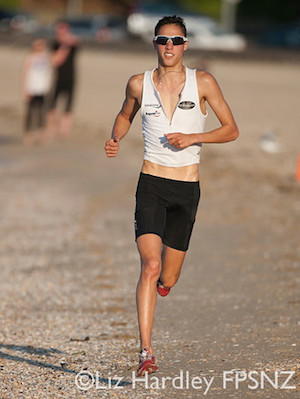 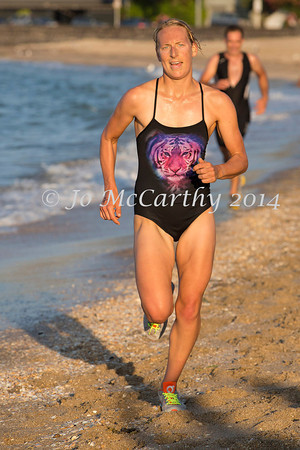 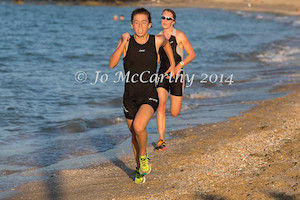 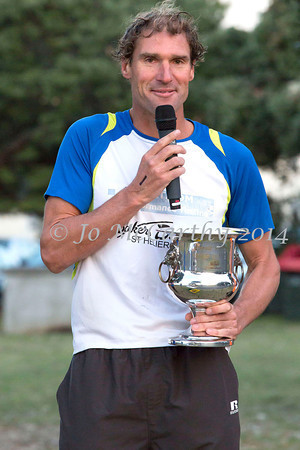 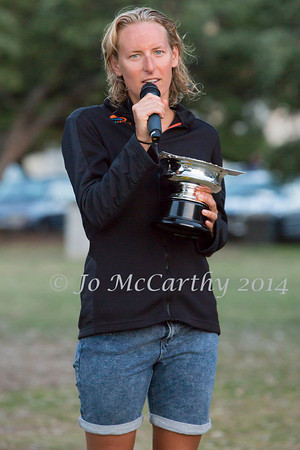 The all-important final and deciding race in the Stroke & Stride Series garnered even more importance with the event awarded New Zealand Swimrun Championship status for 2014.  Points from this event were imperative for athletes contesting the Series Grand Prix.

Our brilliant summer continued for our final event and once again Auckland City was enjoying a superb blue sky beach day midweek. There was a balmy little breeze blowing straight onshore so the sea state was chopped up slightly for the swim at picturesque Mission Bay. The out and back run stretched out along the waterfront past Kohimamara Beach as far as the turn cone at St Heliers.

There were a couple of notable absences amongst the starters for this event. One of the most conspicuous was our reigning three time New Zealand Swimrun Champion Cameron Todd leaving the door wide open for a new champion in 2014. The onshore wind and outgoing tide created tricky conditions and didn’t look to help anyone’s navigation in the 1000 metre swim as by the time the fastest of the men’s field closed on the first swim buoy they were coming in from a variety of directions.

All season long it has been Rebecca Clarke who has shone in the swim leg of these events and it was no different this time over the one kilometre metre swim as she lead the women’s field by half a minute touching the sand in 13 minutes flat.  Her closest pursuers were another couple of exceptional swimmers in Elise Salt 13min 32sec and Molly Swanson 13m 38sec. Then there was another substantial gap until we saw Claire Macky 14min 28sec, Alana Lythe 14min 36sec, Amelia Watkinson 14min 38sec and Rose Dillon 14min 40 sec exit the water and run up the beach and into the transition with Florence Van Dyke 14min 50sec and Jennifer Sweny 15min 03sec also in the hunt.

The run leg of a Stroke & Stride is not a place to relax and that has never been Brent Foster’s formula for success anyway however his swim companion Jay Wallwork wasn’t even going to wait until the run to make his move. Jay flew through transition like a man possessed and then he threw himself into the 4000 metres with no intention of giving any of his competition a sniff of the lead.  This tactic worked to perfection and by run’s end he’d extended to a 17 second lead and convincingly won the final event of the summer and recorded his second ever Stroke & Stride victory.  Second place went to Brent Foster and while he couldn’t match his win from a fortnight ago he once again reminded everyone that he is still at the top of his game.  Way back in November Dan Hoy had won the opening race of the summer and signed off his season with a fine third placing in the New Zealand Championship. Long-time campaigner Matt Franklin was having his best Stroke & Stride race ever with a terrific fourth place finish just seconds ahead of Quinn Wallwork coming home in fifth.

Back out on the run course any ambitious plans the women’s field may of harboured to run down swim leader Rebecca Clarke came to nought. Rebecca has been in scintillating form all summer long and the lead she had exiting the swim was only extended on the journey round the bays. In the final run up the beach to the finish it was indeed Rebecca Clarke adding the New Zealand Swimrun Championship to her trophy collection followed by a gallant Elise Salt and then a gap of ten seconds to Amelia Watkinson who’s matchless leg speed had ran herself up into third place.  Molly Swanson earned herself the fourth spot in this classy championship field ahead of the young and ever-improving Rose Dillon in her first season racing the Stroke & Stride.

The Series Grand Prix awards points at each of the events and decides which competitor receives the Stroke & Stride Cup and the title of Series Champion.  For the 17th season the Stroke & Stride was again the Brent Foster show as this incomparable athlete once more was the dominant force over the Series with peerless consistency recording a first place, four seconds and a third.  Cooper Rand (2nd, 1st, 2nd, 1st & 1st) was for all money looking like owning the title in 2014 only to be cruelly robbed by injury on the eve of the final event.  Coming through in third place was the up and coming and now New Zealand Swimrun Champion Jay Wallwork (3rd, 3rd, 1st, 2nd & 1st) ahead of the seasoned Liam Scopes (5th, 7th, 7th, 3rd, 3rd & 6th).  As our younger athletes from previous seasons mature, there’s a new crop of young guys stepping up to challenge and leading the charge from the front this year is dynamic Dan Hoy (1st, 5th, 3th & 3rd).

It has been well established over the years that to finish the season crowned Stroke & Stride Champion takes a combination of talent and durability over the entire summer season.  Perhaps we now need to add perseverance to the success recipe as our Series Champion in 2014 Rebecca Clarke (1st, 2nd, 2nd, 2nd, 1st & 1st) has been carefully honing her skills at the swimrun game over nine seasons and has finally climbed into the top spot.  Like the men, this summer in the women’s field there are athletes throwing down the gauntlet, ready to challenge for a win at every race.  Amelia Watkinson (2nd, 3rd, 3rd, 3rd, 1st & 3rd) proved a class act all season long as she finished her amazing season in a splendid 2nd overall.  Two victories midseason highlighted the talent Penny Hayes (2nd, 3rd, 1st, 1st & 2nd) brings to the table each fortnight and she took the final podium position. Improving with every race rewarded Molly Swanson (7th, 9th, 7th, 5th, 2nd & 4th) with fourth position and Claire Macky (6th, 7th, 6th, 9th, 3rd & 6th) rounded out the top five in the Grand Prix.