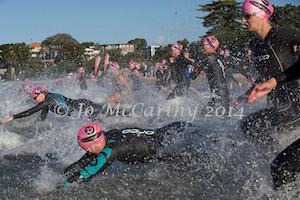 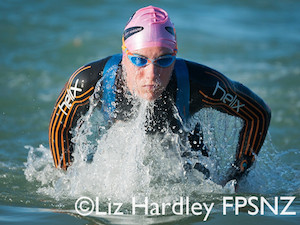 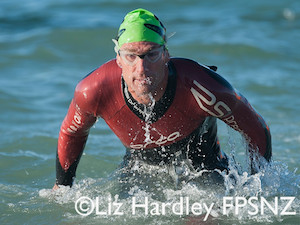 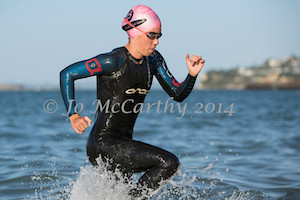 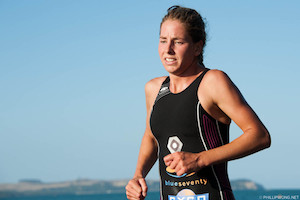 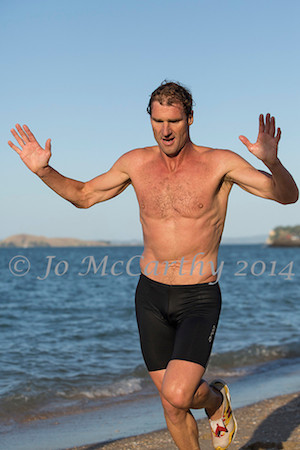 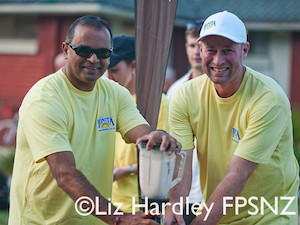 The business end of the season is when the going gets tough as competitors strive to gain an advantage over their opponents.  For the penultimate event of the season in the Stroke & Stride Series that toughness was upped a further notch with the shifty little onshore breeze that came out to play in Auckland for the afternoon.

The first leg of the swim course was a slog out to the first can head on into the small chop followed by a quick zip across the back and then what should have been a relatively easy ride home so long as you pointed yourself in the right direction.  There’s nothing wrong with Molly Swanson’s navigation and no one can match her speed in the water so the result was a handy lead for herself when she touched the beach recording 10 minutes and 17 seconds for the 750 metre swim course.  It was close to a minute later when the quartet of chasers arrived consisting of Claire Macky, Rose Dillon, Katherine Badham and Amelia Watkinson. Then a further three-quarters of a minute passed before another bunch hit the beach with names such as Julia Cree and Shelley King to the fore.

Reigning Series champion Brent Foster couldn’t help but smile when he looked over the swim course as these conditions were made to order for someone with his open water mastery.  He was still smiling 9 minutes and 20 seconds later as he sprang from waves and ran up to the transition with a healthy half minute lead now in the bank.  In fact his closest pursuers were the Franklin brothers: Matt and Sam. Then a full minute behind the flying Fozzie came more chasers including Leo Roper and Quinn Wallwork while Liam Scopes was staring down a 90 second deficit as he sprinted up the beach and through transition before he could unleash his prodigious run.

There was 5 kilometres of real estate between the end of the swim and the race finish. The out and back run goes as far as St Heliers and just about all of that was exposed to the breeze, some of it at your back, some of it on the nose.  Isn’t it great the way a tailwind can be hardly noticeable whereas a headwind can make you feel you’re trying to run with the handbrake on.  Amelia Watkinson used all this to her advantage as she steadily moved towards the head of the women’s field and then left them in her dust as she accelerated to her second ever Stroke & Stride win repeating the victory from this race a season ago.  Molly Swanson couldn’t match Amelia’s speed on the run however for her fine performance she was rewarded with her best ever finish crossing the line in second.  Claire Macky’s steady progression through the summer claimed her best ever Stroke & Stride result and up onto the podium this time holding out Catherine Badham and Rose Dillon who rounded out the top 5 and also notched up best ever results.

In Brent Foster we have one of the best swimrun athletes the world has seen and through the years he has beaten EVERYONE and won a third of all the Stroke & Stride events ever held.  However the last of his victories was back in 2011 so he was overdue another win and with the conditions at this event we might just see it.  After his dominant swim he hit the pavement for the long 5 kilometre run and held his composure to stay clear of some very classy runners so that he could indeed cross the line at the head of the field.  Leo Roper has raced well all summer but this time he took it to another level coming home in second place for his very own personal best result. Then came Liam Scopes who enjoyed himself so much at Race #6 he repeated his third placing from a fortnight ago and followed in very quick succession across the line by Matthew McQueen and Quinn Wallwork both recording their very own best ever results.

The Series Grand Prix will be decided in a fortnight at Race #8, the season finale with points from this event added to the best five other results of the season.  Defending Series Champion Brent Foster has made a determined defence of his title to date however he is eight points in arrears of the in form athlete and current Series Leader Cooper Rand.  Scoring a great third place today has moved Liam Scopes up into fourth place and into a position to challenge Jay Wallwork for the podium. Michael Perree holds fifth but only just with Dan Hoy, Matty McCullough and Leo Roper poised to pounce.

Meanwhile Rebecca Clarke goes into the closing round with a minuscule two point lead over her perpetual sparring partner Penny Hayes so we can’t wait to see how this one will play out in the decisive final round. Our dynamic duo will also be wary of the threat posed by Amelia Watkinson not too far behind in third place after today’s perfect result. The top five will be completed by Ashleigh Williams, Molly Swanson, Claire Macky and/or Katherine Badham with one more race to tidy up the final order.

The last chance for scoring a high placing result or to accrue those valuable points at the Stroke & Stride comes in a fortnight’s time on Wednesday, March 12th