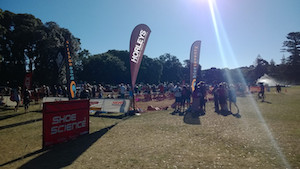 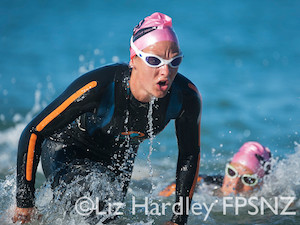 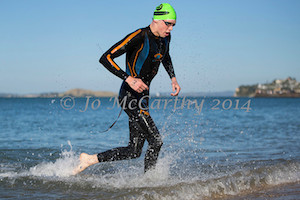 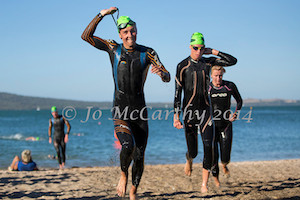 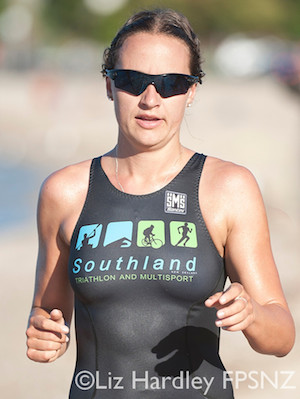 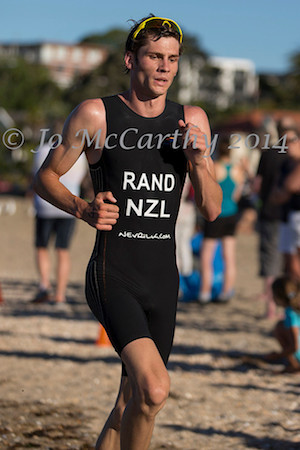 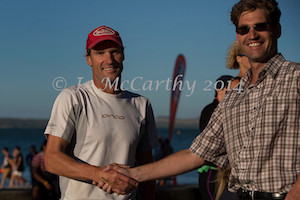 The fifth event in the Stroke & Stride Series turned on arguably the best weather conditions of the season to date. At popular Mission Bay we basked in a sublime summer’s day that combined with a high tide on the sparkling blue waters of the Waitemata Harbour. This did result in competitors having to compete for beach space with the Aucklanders out for their relaxing afternoon sojourn in the sun.

When an area of beach was finally cleared for the start a quality women’s field lined up ready for their 750 metre swim. The lightest of breezes wasn’t going to slow anyone down and they were soon out around the two buoys marking the rectangular course and heading back for the beach. Perennial swim leaders Penny Hayes and Rebecca Clarke again got the jump on the pursuers recording 9 minutes 40 seconds earning themselves a half minute lead over Jacey Cropp all alone in third place. Ten seconds later the faucet opened with a continual stream of athletes exiting the water and running into transition with major players Claire Macky 10 minutes 35 seconds and Amelia Watkinson 10 minutes 42 seconds handily placed.

At the same time this was going on the men’s field got underway providing a conundrum for spectators forced to decide where to turn their attention. Eight minutes and 44 seconds later it was Jackson Cropp first to emerge from the sea and attached to his toes we had the unusual sight of Brent Foster for once not leading the way around the cans. It was then game on as these two stormed through lightening quick transitions and out onto the run never more than a few metres apart. Third out of the water was Cooper Rand giving up 30 seconds to the leaders and then following seconds later came the three-time New Zealand Swimrun Champion Cameron Todd with the company of Matty McCullough, Matt Franklin, Sam Franklin and Michael Perree ahead of the dripping hordes as literally hundreds of guys morphed from swim to run and headed off to the turn cone down the road at St Heliers Bay.

Watching the front of the women’s race could give you a sense of déjà vu as it was playing out almost exactly the same as two weeks earlier, then Penny Hayes and Rebecca Clarke swam and ran away from the competition for a superb one-two finish. They must have enjoyed themselves as they repeated the formula for this event with again Penny Hayes coming home for the overall win with in the end a comfortable 20 second margin at the finish line. Rebecca Clarke banked more valuable points with a second second placing while the flying Amelia Watkinson scorched the run course to nab the bronze on the back of the day’s fastest run split. Ashleigh Williams backed up her excellent swim with a rock solid run to score her best result of the season in fourth while remarkable Jacey Cropp again turned heads as she repeated her fifth placing from Race #4.

After matching each other stroke for stroke out on the water once out on the road defending Series Champion Brent Foster bid farewell to Jackson Cropp and ran himself into the outright lead. However running fastest of all was Cooper Rand who was the winner the last time we raced over the 750m/4km distance back in November. At the end of the 4 kilometres he had done it again and Cooper Rand claimed his second fabulous victory at the Stroke & Stride. He may have won many, many more Stroke & Stride races than any other athlete however Brent Foster had to settle for second on this occasion. Talented Michael Perree reached new heights finishing in a fine third place for his best ever result. Repeating his fourth place from the fourth round was Matty McCullough and sensational swim leader Jackson Cropp hung on for fifth and his best ever finish and matched his sister’s earlier result.

Time to get your calculators out as with just three remaining races the likely contenders for the Series titles are now jostling for position. Penny Hayes has a 14 point buffer over Rebecca Clarke so one of them must be favoured to get their name on the cup this summer. A little further back Amelia Watkinson and Ashleigh Williams are probably the only athletes that could get up and challenge the leading duo however they may be occupied in their very own battle to decide who gets that final spot on the podium.

Cooper Rand has won twice already this summer but the masterly Brent Foster has still earned himself a five point lead in the overall Grand Prix. They have a host of up and coming challengers in Jay Wallwork, Matty McCullough, Dan Hoy and Michael Perree capable of mixing it with them out on the course but when it comes to the Grand Prix they are 20 points adrift.

More action and answers to follow in a fortnight’s time at Stroke & Stride Race #6 on Wednesday, February 29th