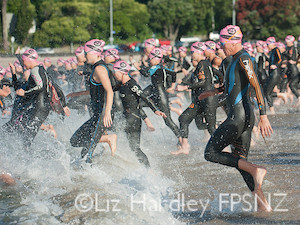 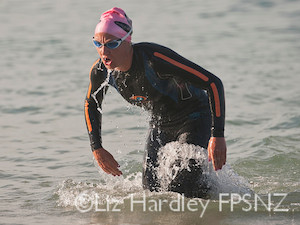 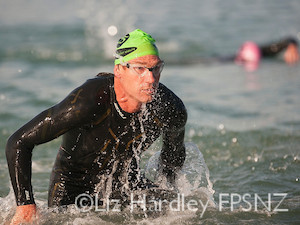 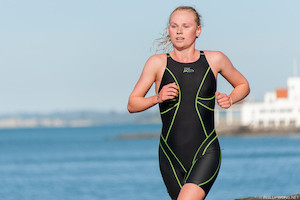 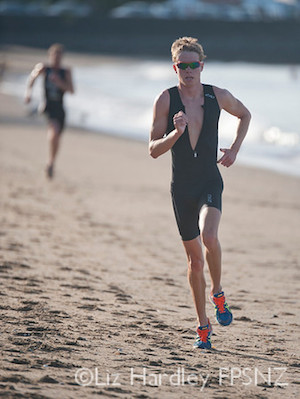 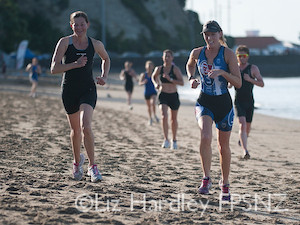 The final event of 2013 was Stroke & Stride number 190 on the all time list and so it was only right that conditions laid on in Auckland were near as perfect as can be for this auspicious swimrun occasion. It was the sort of day everybody wants to be at the beach regardless and for the swimrun athletes the racing was an added attraction. Competitors, spectators and beachgoers enjoying themselves at Mission Bay were bathed in warm afternoon sunshine and just the lightest possible breeze to stop the temperatures being oppressive.

The 1000 metre swim over the big triangular course had nary a ripple to put swimmers off their stroke. The woman’s field made short work of the charge out to the first can 400 metres directly off the beach that they rounded just 5 minutes after they had started. By swim’s end a group of five had broken clear from the field and they touched the shore in 13 minutes and 3 seconds with Penny Hayes on the front of the bunch, Rebecca Clarke and Series Champion Sophie Corbidge tucked in close behind with Jaimee Leader and Samantha Warriner also in the mix. Their efforts driving the pace at the head of the field earned them a decisive and telling three-quarters of a minute lead over their pursuers that included Elise Salt, our winner from the opening round a month earlier.

The men’s field had stood on the shore and intently watched most of this unfold so when it came their turn to hit the water they also immediately punched the turbo button and we saw those in front round that distant 400 metre turn buoy in only four and a half minutes. Not too many minutes later as they turned at buoy number two for the final homeward leg it was apparent a lone swimmer had now gone clear and was doing his utmost to gain the maximum possible dominance during the aquatic portion of the event. And as he scraped in just inside the 12 minute mark for the kilometre it was no surprise that it was local legend Brent Foster hammering home the advantage. In his wake came the pair of Trent Thorpe and Sam Ward recording 12 minutes 25 seconds for their swim that was good enough to earn them a 20 plus second gain over all the rest.

After such a delightful swim there was the case of the little 3 kilometre run to sort out and decide the final placings. While 3000 metres is the shortest Stroke & Stride run distance it can also be the most painful as there is no time to warm into it plus if you were red-lining the swim to hold your position you faced a world of hurt asking your body to change from the horizontal to an upright stance and your legs are suddenly demanding absolutely everything the cardiovascular system has to offer.

Last summer Sophie Corbidge ruled at Stroke & Stride going unbeaten in the whole series and very soon into this run it was looking as if nothing had changed much between the seasons. When Sophie can combine one of the fastest swims with one of the fastest runs it is an unmatchable combination and now rewards her with her first win of this season. Rebecca Clarke backs up her victory at Race #2 a fortnight ago with the runner-up position this time just edging ahead of Penny Hayes. Racing for the first time this summer sees Jaimee Leader score her best ever finish with a scintillating fourth placing ahead of Elise Salt.

A year ago Sam Ward seemed also to be winning these races at will with three tremendous clearcut victories through the season. Now he is back for his first race of the new season and after keeping the lead swimmer in sight he got to the run course and unleashed his version of a scorching 3000 metre run split to overtake Brent Foster and score anotther convincing podium topping performance. For the second time Brent Foster has to settle for second place and Race #1 winner Dan Hoy gets himself back on the podium in third place. Having his best ever result sees Liam Ward finish in fourth place seconds ahead of Slovenia’s Jaroslav Kovacic who is also getting better with every outing, so we’ll be watching this space.

Going into the Christmas break our first three events have produced three different female winners and three different male winners. Even into our twenty-fifth season we have never had that diverse run of results before. If this trend continues into 2014 it will make for a very interesting Grand Prix. However what will be decisive as it has always been is consistency and that is already apparent with current leaders Penny Hayes and Brent Foster both without a win this summer but both finishing handy to the podium at every race and accumulating themselves those valuable points. It is still a long way to go and the fastest runner in the field Dan Hoy has five more events to run and only one point to make up on Brent Foster, the fastest swimmer in the field. And they’re not the only two in it. To defend her eight point lead Penny Hayes will need to see off three celebrated athletes all with Stroke & Stride wins to their name in Rebecca Clarke, Amelia Watkinson and Elise Salt.

There is now a five week break from competition for athletes to hone their swimrun skills before action resumes in 2014 on Wednesday, January 15th